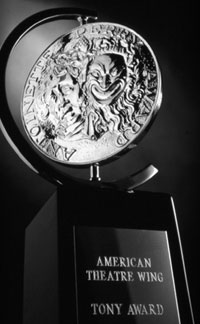 imagesize = 200px
caption = Designed by Herman Rosse, 1949
description = Excellence in
presenter = and
country = USA
year = 1947
website = http://www.tonyawards.com/The Antoinette Perry Awards for Excellence in Theatre, more commonly known as the Tony Awards, recognize achievement in live American and are presented by the and [The League of American Theatres and Producers was renamed "The Broadway League" [http://www.playbill.com/news/article/113654.html] ] at an annual ceremony in . The awards are for Broadway productions and performances, as well as discretionary non-competitive Special Tony Awards and the Regional Theatre Tony Award, and the Tony Honors for Excellence in the Theatre. [ [http://www.tonyawards.com/en_US/archive/index.html Tony Homepage] and [http://www.tonyawards.com/en_US/about/index.html "About the Tonys: Who We Are"] ] The awards are named after , co-founder of the American Theatre Wing.

In British theatre, the equivalent of the Tony award is the , and a number of the world's longest-running and most successful shows have been successful in receiving award nominations for both and Broadway productions and a number of leading actors, choreographer and designers have also been successful in receiving award nominations on both sides of the Atlantic. The Tony are considered the highest theatre honor, the U.S. theatre industry's equivalent to the Academy Awards (Oscars) for motion pictures.

Awarded by a panel of approximately 700 judges from various areas of the and press, the Tony Award is generally regarded as the theatre's equivalent to the , for excellence in film; the for the , and the for excellence in television. The award was founded by the in 1947 at the suggestion of a committee of theatrical producers headed by , but it was not until the third awards ceremony in 1949 that the first Tony medallion was actually given to award winners. The award is named for , an actress, director, producer and co-founder of the American Theatre Wing, who had recently passed away. The first awards ceremony was held on , at the hotel in New York City.

The Tony Award trophy consists of a medallion, a mix of mostly brass and a little bronze, with a nickel plating on the outside; a black acrylic glass base, and the nickel-plated pewter swivel. [http://www.playbill.com/features/article/118031.html] Since 1967, the award ceremony has been broadcast on US national television and includes songs from the nominated musicals, as well as video clips of, or presentations about, nominated plays. The American Theatre Wing and jointly present and administer the awards. Audience size for the telecast is generally well below that of other awards shows, but the program reaches an affluent audience, which is prized by advertisers. [ [http://www.tonyawards.com/en_US/archive/index.html Tony Homepage] ]

Details of the Tony Awards

"Note: all information except the rules for a new play are from: [http://www.tonyawards.com/en_US/about/TonyRules2006-2007Rules.pdf Tony Rules and Regulations] "

Rules for a "new" play or musical

For the purposes of the award, a "new" play or musical is one that has not previously been produced on Broadway and is not part of the "historical or popular repertoire." This phrase has been the subject of some controversy, as some shows have been ruled ineligible for the "new" categories, meaning that their authors did not have a chance to win the marquee awards of Best Play or Best Musical (or Best Score or Best Book for musicals). On the other hand, some people feel that allowing plays and musicals which are commonly produced to be eligible as new gives them an unfair advantage, because they will have benefited from additional development time as well as additional familiarity with the Tony voters. Shows recently transferred from or the West End are eligible as new, as are productions based closely on movies.

The "Administration Committee" has 24 members: 10 designated by the American Wing, 10 by The Broadway League, and one each by the Dramatists Guild, Actors' Equity Association, United Scenic Artists, and the Society of Stage Directors and Choreographers. This committee, among other duties, determines eligibility for nominations in all awards categories. The Administration Committee for 2006-07: [http://www.tonyawards.com/en_US/about/admin_comm.html Tony Awards site]

The "Nominating Committee" makes the nominations for the various categories. This rotating group of up to 30 theatre professionals is selected by the Tony Awards "Administration Committee". Nominators serve three-year terms and are asked to see every new Broadway production. Nominators for 2007-2008 are listed at [http://www.tonyawards.com/en_US/about/nom_comm.html TonyAwards.com] .

There are approximately 750 eligible voters, a number that changes slightly from year to year. These include the board of directors and designated members of the advisory committee of the American Theatre Wing; members of the governing boards of Actors' Equity Association, the Dramatists Guild, the Society of Stage Directors and Choreographers, United Scenic Artists, and the Association of Theatrical Press Agents and Managers; those persons whose names appear on the first night press list; members of the Theatrical Council of the Casting Society of America; and voting members of The Broadway League.

A Broadway theatre is defined as having 500 or more seats, among other requirements. While the Rules define a "Broadway" theatre in terms of its size, not its geographical location, the list of "Broadway" theatres is determined solely by the Tony Awards Administration Committee, and as of the 2006-2007 season, the list consists solely of theaters located in or around in . [ [http://www.tonyawards.com/en_US/about/TonyRules2006-2007Rules.pdf Tony Awards Rules and Regulations for 2006-07 season] ] [ [http://www.playbill.com/news/article/114923.html "playbill.com" article, Feb. 7, 2008, ASK PLAYBILL.COM: Broadway or Off-Broadway—Part I] ]

There are presently 27 categories of awards, plus several special awards. Starting with 11 awards in 1947, the names and number of categories have changed over the years; a complete history of each award category was published in 2005. [ [http://www.tonyawards.com/en_US/news/articles/2005-02-02/200502021107372432593.html History of Tony categories] ] A newly established non-competitive award, The Isabelle Stevenson Award, will be given for the first time at the awards ceremony in 2009. The award is for an individual who has made a "substantial contribution of volunteered time and effort on behalf of one or more humanitarian, social service or charitable organizations." [Gans, Andrew. [http://www.playbill.com/news/article/122167.html "Tony Awards to Present Isabelle Stevenson Award in May 2009",] playbill.com, October 8, 2008]

While the theatre-going public may consider the Tony Awards to be the Oscars of live theatre, critics have suggested that the Tony Awards are primarily a promotional vehicle for a small number of large production companies and theatre owners in New York City. [cite news
last = Okrent
first = Daniel
title = There's No Business Like Tony Awards Business
language = English
publisher = The New York Times
date= May 9, 2004
url = http://query.nytimes.com/gst/fullpage.html?res=9C03EEDA143CF93AA35756C0A9629C8B63
accessdate = 2007-10-07 ] Only shows playing in one of 39 "Broadway" theatres designated by the Tony Awards Management Committee are eligible for the Tony Awards. The 39 "Broadway" theatres are all large venues located between 40th and 66th Streets and 6th and 10th Avenues in New York City, an area surrounding Broadway from Times Square to Lincoln Center. Shows playing in "off-Broadway" or "off-off-Broadway" theatres, or shows playing outside of New York City, are not eligible. Since there are only 39 theatres, only a portion of which will be featuring a "new" production in any given season, and 27 award categories, it's likely that many "new" shows will reap at least one award.

Some notable records and facts about the Tony Awards include the following: [ [http://www.tonyawards.com/en_US/archive/dyk/index.html Did You Know, Official Tony Website] ]

*In the episode , Jerry and Kramer are at the Tonys and Kramer is seen carrying a Tony for the fictional play, Scarsdale Surprise, that he took along with him. Unfortunately, after a beatdown by , his Tony is smashed to bits.

*In Sharpay, says that she "Doesn't want her musical to be invaded by people who doesn't know the difference between a Tony Award, and ."