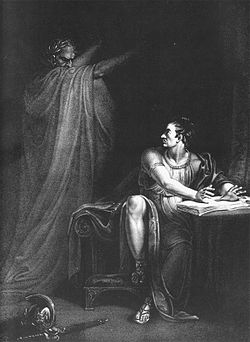 The ghost of Caesar taunts Brutus about his imminent defeat. (Copperplate engraving by Edward Scriven from a painting by Richard Westall: London, 1802.)

The Tragedy of Julius Caesar, also known simply as Julius Caesar, is a tragedy by William Shakespeare, believed to have been written in 1599.[1] It portrays the 44 BC conspiracy against the Roman dictator Julius Caesar, his assassination and the defeat of the conspirators at the Battle of Philippi. It is one of several Roman plays that Shakespeare wrote, based on true events from Roman history, which also include Coriolanus and Antony and Cleopatra.

Although the title of the play is Julius Caesar, Caesar is not the central character in its action; he appears in only three scenes, and is killed at the beginning of the third act. The protagonist of the play is Marcus Brutus, and the central psychological drama is his struggle between the conflicting demands of honour, patriotism, and friendship.

The play reflected the general anxiety of England over succession of leadership. At the time of its creation and first performance, Queen Elizabeth, a strong ruler, was elderly and had refused to name a successor, leading to worries that a civil war similar to that of Rome might break out after her death.[2]

Marcus Brutus is Caesar's close friend and a Roman praetor. Brutus allows himself to be cajoled into joining a group of conspiring senators because of a growing suspicion—implanted by Caius Cassius—that Caesar intends to turn republican Rome into a monarchy under his own rule.

Traditional readings of the play maintain that Cassius and the other conspirators are motivated largely by envy and ambition, whereas Brutus is motivated by the demands of honour and patriotism. One of the central strengths of the play is that it resists categorising its characters as either simple heroes or villains. The early scenes deal mainly with Brutus's arguments with Cassius and his struggle with his own conscience. The growing tide of public support soon turns Brutus against Caesar (this public support was actually faked; Cassius wrote letters to Brutus in different handwritings over the next month in order to get Brutus to join the conspiracy). A soothsayer warns Caesar to "beware the Ides of March,"[4] which he ignores, culminating in his assassination at the Capitol by the conspirators that day.

Caesar's assassination is one of the most famous scenes of the play, occurring in Act 3 (the other is Mark Antony's oration "Friends, Romans, countrymen".) After ignoring the soothsayer as well as his wife's own premonitions, Caesar comes to the Senate. The conspirators create a superficial motive for the assassination by means of a petition brought by Metellus Cimber, pleading on behalf of his banished brother. As Caesar, predictably, rejects the petition, Casca grazes Caesar in the back of his neck, and the others follow in stabbing him; Brutus is last. At this point, Caesar utters the famous line "Et tu, Brute?"[5] ("And you, Brutus?", i.e. "You too, Brutus?"). Shakespeare has him add, "Then fall, Caesar," suggesting that Caesar did not want to survive such treachery. The conspirators make clear that they committed this act for Rome, not for their own purposes and do not attempt to flee the scene. After Caesar's death, Brutus delivers an oration defending his actions, and for the moment, the crowd is on his side. However, Mark Antony, with a subtle and eloquent speech over Caesar's corpse—beginning with the much-quoted "Friends, Romans, countrymen, lend me your ears"[6]—deftly turns public opinion against the assassins by manipulating the emotions of the common people, in contrast to the rational tone of Brutus's speech. Antony rouses the mob to drive the conspirators from Rome. Amid the violence, the innocent poet, Cinna, is confused with the conspirator Lucius Cinna and is murdered by the mob.

The beginning of Act Four is marked by the quarrel scene, where Brutus attacks Cassius for soiling the noble act of regicide by accepting bribes ("Did not great Julius bleed for justice' sake? / What villain touch'd his body, that did stab, / And not for justice?"[7] The two are reconciled; they prepare for war with Mark Antony and Caesar's adopted son, Octavian (Shakespeare's spelling: Octavius). That night, Caesar's ghost appears to Brutus with a warning of defeat ("thou shalt see me at Philippi"[8]). At the battle, Cassius and Brutus knowing they will probably both die, smile their last smiles to each other and hold hands. During the battle, Cassius commits suicide after hearing of the capture of his best friend, Titinius. After Titinius, who wasn't really captured, sees Cassius's corpse, he commits suicide. However, Brutus wins the battle. Brutus, with a heavy heart, battles again the next day. He loses and commits suicide. The play ends with a tribute to Brutus by Antony, who proclaims that Brutus has remained "the noblest Roman of them all"[9] because he was the only conspirator who acted for the good of Rome. There is then a small hint at the friction between Mark Antony and Octavius which will characterise another of Shakespeare's Roman plays, Antony and Cleopatra. 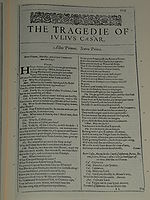 Facsimile of the first page of Julius Caesar from the First Folio, published in 1623

Julius Caesar was originally published in the First Folio of 1623, but a performance was mentioned by Thomas Platter the Younger in his diary in September 1599. The play is not mentioned in the list of Shakespeare's plays published by Francis Meres in 1598. Based on these two points, as well as a number of contemporary allusions, and the belief that the play is similar to Hamlet in vocabulary, and to Henry V and As You Like It in metre,[10] scholars have suggested 1599 as a probable date.[11]

The text of Julius Caesar in the First Folio is the only authoritative text for the play. The Folio text is notable for its quality and consistency; scholars judge it to have been set into type from a theatrical prompt-book.[12] The source used by Shakespeare was Sir Thomas North's translation of Plutarch's Life of Brutus and Life of Caesar[13]

The play contains many anachronistic elements from the Elizabethan period. The characters mention objects such as hats and doublets (large, heavy jackets) – neither of which existed in ancient Rome. Caesar is mentioned to be wearing an Elizabethan doublet instead of a Roman toga. At one point a clock is heard to strike and Brutus notes it with "Count the clock".

Shakespeare deviated from these historical facts in order to curtail time and compress the facts so that the play could be staged more easily. The tragic force is condensed into a few scenes for heightened effect.

Critics of Shakespeare’s play Julius Caesar differ greatly on their views of Caesar and Brutus. Many have debated whether Caesar or Brutus is the protagonist of the play, because of the title character's death in 3.1. But Caesar compares himself to the Northern Star, and perhaps it would be foolish not to consider him as the axial character of the play, around whom the entire story turns. Intertwined in this debate is a smattering of philosophical and psychological ideologies on republicanism and monarchism. One author, Robert C. Reynolds, devotes attention to the names or epithets given to both Brutus and Caesar in his essay “Ironic Epithet in Julius Caesar”. This author points out that Casca praises Brutus at face value, but then inadvertently compares him to a disreputable joke of a man by calling him an alchemist, “Oh, he sits high in all the people’s hearts,/And that which would appear offence in us/ His countenance, like richest alchemy,/ Will change to virtue and to worthiness” (I.iii.158-60). Reynolds also talks about Caesar and his “Colossus” epithet, which he points out has its obvious connotations of power and manliness, but also lesser known connotations of an outward glorious front and inward chaos.[16] In that essay, the conclusion as to who is the hero or protagonist is ambiguous because of the conceit-like poetic quality of the epithets for Caesar and Brutus.

Myron Taylor, in his essay “Shakespeare’s Julius Caesar and the Irony of History”, compares the logic and philosophies of Caesar and Brutus. Caesar is deemed an intuitive philosopher who is always right when he goes with his gut, for instance when he says he fears Cassius as a threat to him before he is killed, his intuition is correct. Brutus is portrayed as a man similar to Caesar, but whose passions lead him to the wrong reasoning, which he realises in the end when he says in V.v.50–51, “Caesar, now be still:/ I kill’d not thee with half so good a will”.[17] This interpretation is flawed by the fact it relies on a very odd reading of "good a will" to mean "incorrect judgements" rather than the more intuitive "good intentions."

Joseph W. Houppert acknowledges that some critics have tried to cast Caesar as the protagonist, but that ultimately Brutus is the driving force in the play and is therefore the tragic hero. Brutus attempts to put the republic over his personal relationship with Caesar and kills him. Brutus makes the political mistakes that bring down the republic that his ancestors created. He acts on his passions, does not gather enough evidence to make reasonable decisions and is manipulated by Cassius and the other conspirators.[18]

The play was likely one of Shakespeare's first to be performed at the Globe Theatre.[19] Thomas Platter the Younger, a Swiss traveller, saw a tragedy about Julius Caesar at a Bankside theatre on 21 September 1599 and this was most likely Shakespeare's play, as there is no obvious alternative candidate. (While the story of Julius Caesar was dramatised repeatedly in the Elizabethan/Jacobean period, none of the other plays known are as good a match with Platter's description as Shakespeare's play.)[20]

After the theatres re-opened at the start of the Restoration era, the play was revived by Thomas Killigrew's King's Company in 1672. Charles Hart initially played Brutus, as did Thomas Betterton in later productions. Julius Caesar was one of the very few Shakespearean plays that was not adapted during the Restoration period or the eighteenth century.[21] 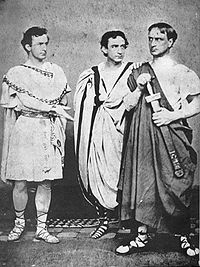 The Canadian comedy duo Wayne and Shuster parodied Julius Caesar in their 1958 sketch Rinse the Blood off My Toga. Flavius Maximus, Private Roman Eye, is hired by Brutus to investigate the death of Caesar. The police procedural combines Shakespeare, Dragnet, and vaudeville jokes and was first broadcast on The Ed Sullivan Show.[24]

The 1960 film An Honourable Murder is a modern reworking of the play.

In 1973 the BBC made a television play Heil Caesar, written by John Griffith Bowen. This was an adaptation of the play put into a modern setting in an unnamed country, with references to recent events in a few countries. It was intended as an introduction to Shakespeare's play for schoolchildren, but it proved good enough to be shown on adult television, and a stage version was later produced.[25][26]

In 2006, Chris Taylor from the Australian comedy team The Chaser wrote a comedy musical called Dead Caesar which was shown at the Sydney Theatre Company in Sydney.

The line "The Evil That Men Do", from the speech made by Mark Antony following Caesar's death ("The evil that men do lives after them; The good is oft interred with their bones.") has had many references in media, including the titles of ...

The 2009 movie Me and Orson Welles, based on a book of the same name by Robert Kaplow, is a fictional story centred around Orson Welles' famous 1937 production of Julius Caesar at the Mercury Theatre. British actor Christian McKay is cast as Welles, and costars with Zac Efron and Claire Danes.

In the Ray Bradbury book Fahrenheit 451, some of the character Beatty's last words are "There is no terror, Cassius, in your threats, for I am armed so strong in honesty that they pass me as an idle wind, which I respect not!"