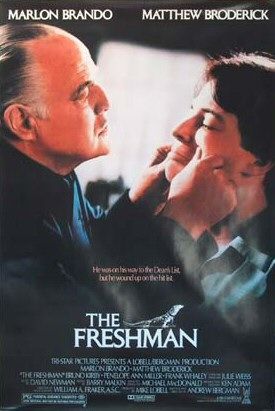 "The Freshman" is a motion picture comedy starring and , in which Brando deliberately parodies his own portrayal of in "".

The plot revolves around quirky aspects such as Broderick's entanglement into an illicit business of offering exotic and endangered animals as specialty food items; Broderick's character, a first-year film student at , is at one point tasked with delivering a Komodo Dragon for this purpose.

Clark Kellogg () leaves his mother and environmental activist stepfather Dwight in Vermont to go to (NYU) to study film. As he's wandering around lost in , he's approached by Victor Ray (), who at first offers to carry Clark's bags for him, then offers Clark a ride to college in his car. As soon as Clark steps out of the car, Victor drives off with Clark's luggage still in the trunk.

Clark tells his professor, Professor Fleeber (who uses books he has written as required study) about losing his books. Clark notices out the window Victor walking by and gives chase. Victor vows to give his luggage back in return for a favor. Clark is introduced to Victor's uncle, Carmine Sabatini. In a running gag, Clark mentions how much Carmine looks, sounds and acts like in "" -- though no one will tell Carmine this to his face.

Carmine offers Clark the opportunity to make a lot of money just for running small errands. The first is to pick up a from JFK Airport and transport it to a specific address. Clark enlists the help of his roommate to pick up the animal and deliver it to Larry London ().

Clark is also introduced to Carmine's daughter, Tina (), who takes an immediate shine to him; Tina starts to talk to Clark as if the two are soon to be married. A distracted Clark tries to pay attention in Fleeber's film class (where the professor shows clips of ) but he's soon being chased by two agents of the Department of Justice. Upon being caught, he's told that Carmine - also known as "Jimmy The Toucan" - is not only a figure, he runs the Gourmet Club, where endangered animals are used as the main course, specially prepared by Larry London.

Clark finds out that his activist stepfather had been listening in on a conversation with his mother. Right after Clark mentioned the Komodo dragon, Dwight contacted the Department of Justice. Carmine admits to Clark that the Gourmet Club exists, but tells Clark that the two DOJ agents are being bribed by a rival criminal group that wants both Carmine and Clark dead. While driving to the Gourmet Club, a plan is hatched to get Carmine out of the exotic animal business for good and to clear Clark.

At the Gourmet Club's dinner, longtime Miss America pageant host sings a version of "There She Is" when the Komodo Dragon is revealed. Clark steps outside to signal the DOJ agents, and the DOJ agents raid the restaurant where the club is meeting. Carmine is upset that Clark has ratted him out. Carmine pulls a gun, the two wrestle and Carmine is apparently killed in the struggle.

The two DOJ agents, who do indeed turn out to be corrupt, leave with a duffel bag filled with money, though they're soon caught by real FBI agents and arrested. Clark berates his stepfather, who leaves. Carmine then gets up off the floor, having faked his death. Larry London reveals tonight's expensive and exotic dinner is actually turkey, not endangered species (a long-running con of Carmine's, swindling the rich out of their money). It is also revealed that the whole thing had been a set-up. Clark was picked out by Carmine, working with the FBI, because they knew Clark's stepfather would contact the corrupt agents when he found out about Clark's "job".

Carmine and Clark walk off with the Komodo dragon, which will be taken safely to a new habitat at the zoo. He offers to help Clark in any way he needs to make it in . Clark says thanks, but no thanks.

* Beyond the casting of Brando, there are other "Godfather" links. played the young Clemenza in the film's Oscar-winning Part II. , who was the Don's conniving son-in-law Carlo Rizzi in the original "Godfather," appears in the Gourmet Club scenes. (He tells Brando's character: "Good night, boss.")
* When Clark Kellogg visits Tina Sabatini in Carmine’s home he finds the above the fireplace. On Clark’s comment on the quality of the copying work (“full of little cracks and everything”), Tina tells him it is the real Mona Lisa, while a copy hangs in the (“The one they shipped back to , the one behind all that thick glass, the one that all the tourists take the pictures of, that’s the copy.“). Supposedly the painting was switched when it toured the United States 10 years before. Then Tina and Clark dance in front of the Mona Lisa on the music of "Mona Lisa" (written by and , performed by ). It is performed again by later in the film.
* The fake name in the passport that Victor Ray gives to Clark Kellogg is Rodolfo Lassparri. Rodolfo Lassparri is the name of the antagonist in "A Night at the Opera"
* At the end of the film, Brando turns in another parody of an iconic Brando role, this time his “I coulda been a contender” speech from “On the Waterfront,” as Carmine Sabatini addresses the Komodo Dragon with a quiet "You're gonna turn into a bum! ... Without me you coulda been a handbag or somethin'."