Mary Nell Steenburgen[1] (born February 8, 1953) is an American actress. She is best known for playing the role of Lynda Dummar in Jonathan Demme's Melvin and Howard, which earned her an Academy Award and a Golden Globe.

Steenburgen was born in Newport, Arkansas, the daughter of Nellie Mae (née Wall), a school-board secretary, and Maurice Steenburgen, a freight-train conductor who worked at the Missouri Pacific Railroad.[2][3][4][5] Steenburgen grew up in North Little Rock, Arkansas.

Steenburgen moved to New York City in 1972, working at Doubleday's while studying acting at New York's Neighborhood Playhouse under Will Esper.[6] Her break came when she was discovered by Jack Nicholson in the reception room of Paramount's New York office and was cast as the lead in his second directorial effort, the 1978 Western Goin' South.[6] In only her third film, she won the Academy Award for Best Supporting Actress for the 1980 film Melvin and Howard, playing the wife of a man who claims to have befriended reclusive eccentric Howard Hughes.

She had a leading role in the 1979 film Time After Time as a modern woman who falls in love with author H. G. Wells, played by her then-husband-to-be Malcolm McDowell.

Other notable film appearances came in the well-received 1983 film Cross Creek, her performance in What's Eating Gilbert Grape as a woman who is having an affair with the main character Gilbert Grape (Johnny Depp), her role as Hannah Nixon in the Oliver Stone biopic Nixon, and as a woman who discovers her husband is the father of a North Pole elf in the Will Ferrell holiday comedy Elf. She appeared in the 2008 comedy Step Brothers, another film starring Will Ferrell, playing the mother of Ferrell's character.

In The Butcher's Wife, also starring Demi Moore and Jeff Daniels, Steenburgen plays a lead role in which she also sings. Film critic Charles Taylor, in The New York Times, said Steenburgen's "slow-drip voice comes to your ears like honey arriving on a moonbeam". She also acted in the film Life as a House.

She has starred in the sitcom Ink with her current husband Ted Danson, had a regular role in the CBS drama Joan of Arcadia and starred in the television miniseries of Gulliver's Travels with Danson. She appeared as herself alongside Danson in the HBO comedy Curb Your Enthusiasm. In 2002, she played Grace Rinato in Law and Order: Special Victims Unit, in the episode "Denial". 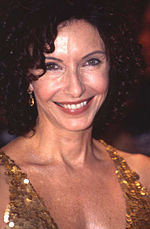 In recent years, she has been in the comedy films Four Christmases opposite Vince Vaughn and Reese Witherspoon, Step Brothers opposite Will Ferrell and John C. Reilly and The Proposal opposite Sandra Bullock and Ryan Reynolds.

According to a written note owned by Garry Marshall, Steenburgen was the first choice to play the lead in the 1990 film Pretty Woman, starring Julia Roberts.[citation needed]

It was announced in June 2010 that Steenburgen would star in a new FX pilot, Outlaw Country.[7]

Dirty Girl, which features Steenburgen along with Juno Temple, Milla Jovovich and William H. Macy, premiered at the Toronto Film Festival on September 12, 2010.

She also appeared in the critically acclaimed film The Help, starring opposite Emma Stone, Viola Davis and Bryce Dallas Howard.

Steenburgen married Malcolm McDowell in 1980 and they had two children together: Lilly Amanda (now Lilly McDowell Walton), born January 31, 1981, and Charles Malcolm, born July 10, 1983. Charlie, who runs a popular blog and twitter feed titled "Dear Girls Above Me" recently had his website, which details the many vapid and airheaded things his upstair neighbors can be overheard saying, optioned for a movie produced by Ashton Kutcher. Steenburgen and McDowell divorced in 1990, and Steenburgen has been married to actor Ted Danson since 1995.

In September 2005, she and Danson gave a guest lecture for students at the Clinton School of Public Service where they discussed their roles in public service as well as the foundations and causes in which they are involved.[8] An alumna of Hendrix College, Steenburgen received an honorary doctorate from the institution in 1989.[9] In 2006, Steenburgen received an honorary Doctor of Humane Letters degree from Lyon College in Batesville, Arkansas.[10]

She is a close friend of Secretary of State and former Senator Hillary Clinton, and supported Clinton's 2008 Presidential campaign along with her husband.[11]

She splits her time living in Ojai, California and Martha's Vineyard, in addition to sharing a condominium with Danson in the River Market District of Little Rock.[citation needed]