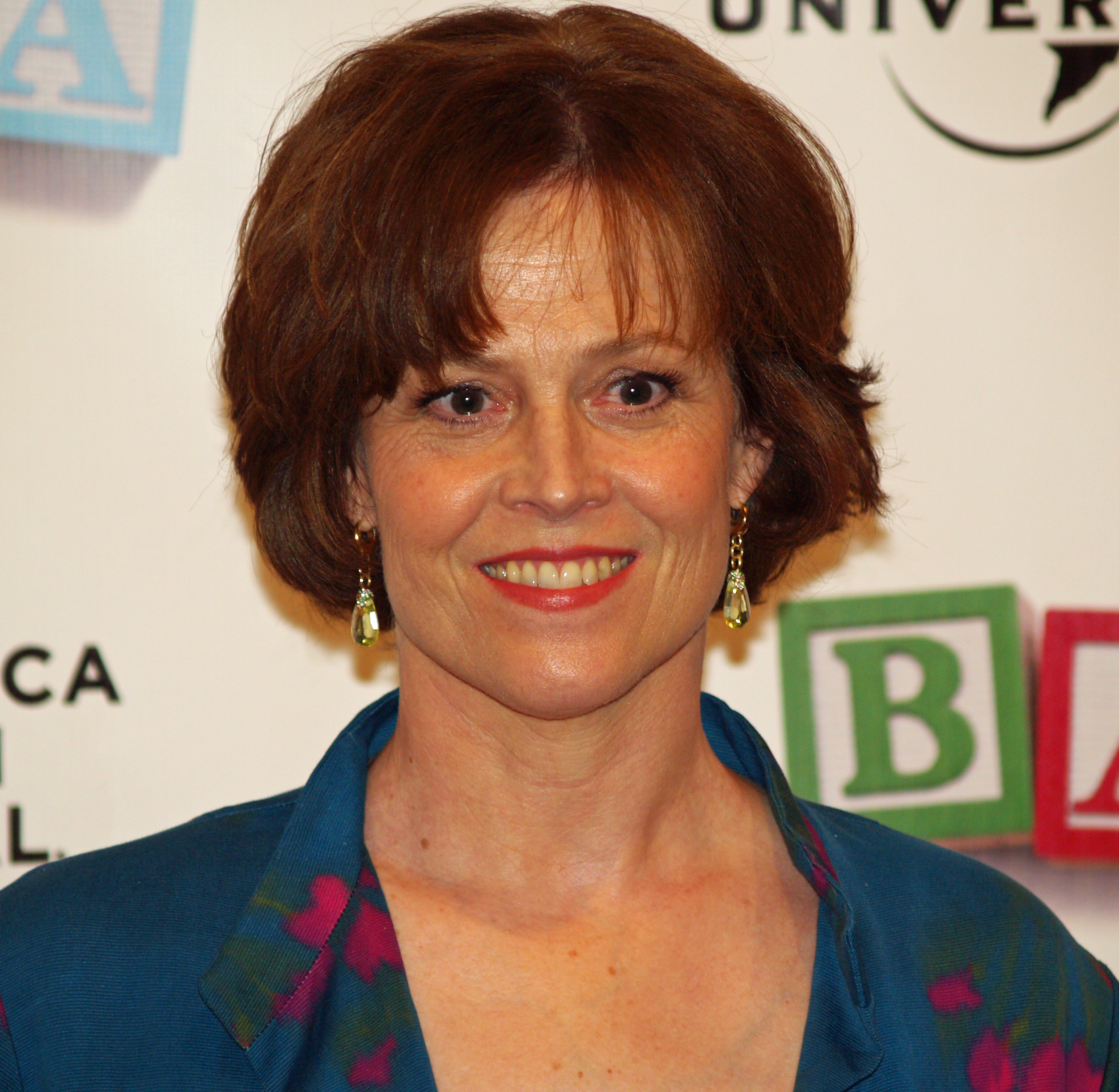 Sigourney Weaver (born , ) is an -nominated American actress, best known for her roles as Lt. in the "Alien" .

Weaver attended the , a prep school in and graduated from (BA, English, 1972). [cite news |first=THOMAS |last=VINCIGUERRA |title=Stars of Stage, Screen ... and Freshman Biology |url=http://www.nytimes.com/2005/09/11/fashion/sundaystyles/11actresses.html?_r=1&pagewanted=print&oref=slogin |work= |publisher= |location= |date=2005-09-11 |accessdate=2008-02-01] She earned an MFA (1974) at Yale Drama, [cite web |url=http://www.yale.edu/terc/aprilweekendvideos/index.htm |title=Training Great Actors: A Scene from Shakespeare |accessdate=2008-02-01|year=2001|work=Yale University Tercentennial (April Weekend Videos) |publisher=|quote= ] where she appeared in the chorus of a production of Aristophanes' "The Frogs" and as one of a mob of Roman soldiers in another production [ [http://sigourneyweaver.org/blog/?tag=yale-drama-school Sigourney Weaver The Frogs] ] as well as, later, in original plays by friend and classmate . She later appeared in the 1981 production of his comedy "".

Although Weaver has played a number of critically acclaimed roles in movies like "", "The Ice Storm", "Dave", and "", she is best known for her appearances as Warrant Officer/Lieutenant in the blockbuster "Alien" movie franchise. Her first appearance as Ripley was in 's 1979 film "Alien". She reprised the role in three sequels, "Aliens", "Alien³", and "". She was nominated for a Best Actress Academy Award for portraying Ripley in "Aliens". Ripley was a breakthrough role: the first female . Although Ripley is tender and nurturing with a cat or a child, she is tough and aggressive with adult humans and alien monsters, and ruthless enough to blow up her own ship or a planetary colony; in the third film, she destroys herself to prevent the xenomorph species from spreading. She also starred in two films in 1988, receiving Academy Award nominations for her roles as Katherine Parker in "Working Girl" and as naturalist Dian Fossey in "Gorillas in the Mist". She lost to Geena Davis and Jodie Foster, respectively.

Weaver also appeared in "" and "" as Dana Barrett. She played the role of the agoraphobic criminal psychologist Helen Hudson in the 1995 movie "Copycat", and went on to become the most highly paid actress of the 1990s. In addition to her trademark role as Ripley, Weaver has recently concentrated on smaller, more challenging roles such as 1999's "". Despite being fifty at the time, Weaver created a stir for appearing nude in that film. Other recent work includes 2006's "". Critics have also noted her consistent performances in comedic roles, such as in "Jeffrey" (1994), "" (1999), and "" (2001), in which she starred with .

In 1997, Weaver won the BAFTA Award for her supporting role in 's "The Ice Storm". In 2003, she was voted 20th in british television's Channel 4's countdown of the 100 greatest movie stars of all time. She was one of only two women in the top 20 (the other was ). That year, she also played The Warden in the movie "Holes". In 2006, Weaver returned to Rwanda for the BBC special "Gorillas Revisited".

Weaver was approached to star as the ADA in the "" but felt the nature of the story was too violent. wanted a 'Sigourney Weaver type' for her film "" but Weaver's agent turned the film down without consulting Weaver. went on to win the Oscar for the role, and Weaver fired her agent. originally wanted Sigourney for the role of in "" but Singer (and , who directed Weaver in "") left the project and the idea to include Frost was dropped. In 2008, Weaver plays the Mom in the TV film "Prayers for Bobby", due to air February 2009. She will also guest-star in the TV show "" in the fall of 2008. [cite web | url = http://community.tvguide.com/blog-entry/TVGuide-News-Blog/Todays-News/Weaver-Guests-Istonei/800045097 | title = "Sigourney Weaver Puts Eli Stone on the Couch" | accessdate = 2008-08-15 | date = 2008-08-15 | work = ]

Weaver also has done voice work in television and film. She had a guest role in the "" episode "" in February 2002, playing the female . In 2006 she was the narrator for the American version of the -winning series "Planet Earth". In 2008 Weaver was featured as a voice in the and Disney release, "WALL•E". She will also voice a narrating role in another computer animated film, "The Tale of Despereaux" based on the novel by set for release .

In addition to her s nomination for "Aliens", Weaver has received two other nominations in her career. This makes Weaver one of only eleven actors and actresses to have received two nominations in the same year. Weaver received a Best Actress nomination for her role as gorilla conservationist in "" and a Best Supporting Actress nomination for her role as Katharine Parker in "" opposite and . She did not win either award, but was awarded a for each role. In fact, Weaver's Golden Globe for Best Leading Actress in a Motion Picture (Drama) was the only time there has ever been a three way tie in the history of a major awards ceremony as Weaver was named joint winner along with Jodie Foster ("The Accused") and Shirley Maclaine ("Madame Souzatska"). By failing to win an Oscar in either category for 1988, she became the first person in history to lose twice in the same ceremony. Three people have been "double losers" since then - Emma Thompson in 1994, Julianne Moore in 2003 and Cate Blanchett in 2008.

Weaver is notable for her stature, standing six feet tall.

After making "", she became a supporter of and is now the DFGFI's honorary chairperson. [ [http://www.gorillafund.org/dian_fossey/ About Dian Fossey - Info about the Life of Dian Fossey - DFGFI ] ] Weaver is an environmentalist. [ [http://chge.med.harvard.edu/events/#NYC_Dinner Center for Health and the Global Environment ] ] In October 2006 she drew international attention through a news conference at the start of a United Nations General Assembly policy deliberation. She outlined the widespread threat to ocean habitats posed by deep-sea trawling, an industrial method for harvesting fish. She also narrated the American version of the BBC/Discovery Channel show "Planet Earth", which focuses on the wonders of our world. [ [http://www.alertnet.org/thenews/newsdesk/N03201755.htm Reuters AlertNet - United Nations to consider deep sea trawling ban ] ] [ [http://www.planetark.org/dailynewsstory.cfm?newsid=38361&newsdate=04-Oct-2006 Planet Ark : United Nations to Consider Deep Sea Trawling Ban ] ] On April 8, 2008, she hosted the annual gala of the [http://www.trickleup.org Trickle Up Program] , a non-profit organization focusing on those in extreme poverty, mainly women and the disabled, in the . [ [http://www.trickleup.org Trickle Up] Trickle Up Gala]

The Italian lesbian science-fiction comics character is inspired by Weaver's role in "Alien".Fact|date=May 2008

In the "" episode "" a dead horse is mistaken for Sigourney Weaver.

In 2007, Weaver reprised her role of in a commercial for . In the commercial Weaver in the power loader vehicle from the movie "Aliens" is battling the queen xenomorph while explaining to watchers how DirecTV is a better deal than cable.

The restaurant from the teen scifi drama TV show "Roswell" features a sandwich named after Weaver.

In a 2007 episode of "", there is a spoof of "Aliens" in which Ripley is running away from the Alien with Newt (played by ) in her arms.