Infobox Film
name = The Brave One 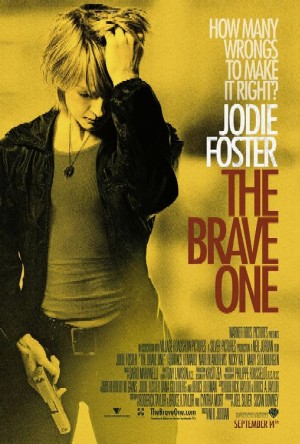 "The Brave One" is a 2007 crime-drama/ directed by , produced by , and starring . It was released in the on , 2007. The film earned Foster a nomination for leading actress in a drama.

As radio show host and professional Erica Bain () and her fiancé David () are walking their dog at Stranger's Gate in New York, they are attacked by three violent criminals. David dies from his injuries, but Erica survives. Unhappy with the police response and unable to deal with the psychological trauma caused by the assault, she attempts to purchase a gun. Unwilling to wait the month required to obtain a notice of approval, she acquires one illegally, and is drawn into a world of vigilantism, killing random criminals and attempting to track down the thugs who killed David.

She strikes up a friendship with Detective Mercer (), who is investigating the vigilante crimes and initially unaware of her role in the deaths, though over the course of the film he comes to suspect her as the killer. At the climax of the film, she finds and confronts the thugs responsible for the murder of David. She kills two, finding and releasing her dog in the process and struggles with the third. Mercer arrives on the scene and has the thug go prone. Erica then retrieves her weapon and attempts to execute the thug. Mercer convinces Erica to lower the gun, but hands her his own in order for her to use a legal weapon to kill the last thug.

She kills the thug and Mercer instructs Erica to shoot him in the shoulder so he can make up a story that the thugs were the ones who went on the vigilante killing spree, until he tracked them down, the gunshot being a result of the confrontation. He places Erica's gun in the last thug's dead hand and Erica leaves the scene, eventually being rejoined by her dog.

of the "" gave the film 3 1/2 stars (out of 4); saying Foster and Howard "are perfectly modulated in the kinds of scenes difficult for actors to play, where they both know more than they're saying, and they both know it." Ebert adds that comparing this film with other revenge movies like Death Wish, "now here is Jodie Foster, with a skilled co-star and director, to give us a movie that deals, really deals, with the issues involved."

Bill Gibron of gave the film a 9 out of 10 and called it one of the best films of the year and said the film is a "startling achievement" for and , saying Foster deserves another Oscar for her performance. Gibron wrote, "Calling it an estrogen-laced "" or a female fashioned "Death Wish" misses the point." Gibron said "on its surface, it's a standard revenge flick...but it’s also much more than that. It’s an excuse for empowerment in a post 9/11, Red State/Blue State, Yellow Alert existence." [cite web|url=http://www.popmatters.com/pm/blogs/shortends_post/48407/the-brave-one-2007/ |title=The Brave One (2007) |accessdate=2007-09-18 |author=Bill Gibron |publisher=] "" critic Terry Lawson said the film "is as bold a movie as we are likely to see this year, a movie that has more in common with 1970s provocations like "" and "" than the simplicities of "Death Wish" or its recent progeny, "Death Sentence"." Lawson said the film "dares to deal with the darkest human impulses in serious ways and would rather leave us disturbed than relieved or self-satisfied." Lawson said the film is "masterfully photographed" by Philippe Rousellot and described Jodie Foster's performance as "shattering", "wrenching", and "fierce", and said the film would have seemed preposterous if not for her "theatrical, deeply personal and compellingly physical" performance. [cite web|url=http://www.freep.com/apps/pbcs.dll/article?AID=/20070914/ENT01/709140319/1036 |title=BRAVELY PROVOCATIVE: Jodie Foster's wrenching performance raises bold questions about violence, fear and revenge |accessdate=2007-09-18 |author=Terry Lawson |date=2007-09-14 |publisher=]

"" film critic Scott Foundas wondered, "are we really witnessing something courageous (as the title suggests) or merely an arted-up exploitation flick—"Death Wish" with allusions to and ] —meant to cash in on audience feelings of fear and impotence in a violent society?" Foundas said "the premise smacks of high-concept contrivance", and "taken literally, almost everything that follows...so seriously strains credibility (even by the standards of the genre) as to enter the realm of the absurd. Taken on the level of a menacing urban fairy tale [like "Mona Lisa" or ""] —it exudes a strange fascination." Scott Foundas wrote, "Arguably, "Death Wish's" Paul Kersey showed more inner conflict over the taking of another human life." and said "The Brave One" isn't the first female-vigilante movie, referring to "". Foundas said the film "hangs in suspended animation between the and the art house" but that the film "is more ambitious and alive—more worth writing, talking and thinking about—than anything that has tumbled off the Hollywood assembly line in a good long while." [cite web|url=http://www.laweekly.com/film+tv/film/the-brave-one-femme-fatal/17214/ |title=The Brave One: Femme Fatal |accessdate=2007-09-18 |author=Scott Foundas |date=2007-09-12 |publisher=] Justin Chang of "Variety" said "Foster’s pistol-packing turn as an avenging dark angel nearly sustains director Neil Jordan’s grim vigilante drama through a string of implausibilities and occasionally trite psychological framing devices, with deft support from Terrence Howard." Chang said that Foster's performance "takes on extra-textual dimensions" thanks to her previous performances as a rape victim in "The Accused", a battered child prostitute in "Taxi Driver", and an FBI agent in "The Silence of the Lambs". Chang said the script relies on "tidy coincidences" and plot devices that seem "awfully convenient", but that "Foster delivers a performance of astonishing physical and psychological credibility." Chang said Neil Jordan "attempts to tap into post-9/11 anxieties and comment on the very American idea of righteous payback." Justin Chang also wrote that the film's dark and grungy ambience is just right thanks to Philippe Rousselot. [cite web|url=http://www.variety.com/review/VE1117934511.html?categoryid=31&cs=1 |title=The Brave One Review - Variety.com |accessdate=2007-09-18 |author=Justin Chang |date=2007-09-03 |publisher=Variety]

Kenneth Turan of the "" said the film is more foolhardy than brave and called it an "unwise attempt" to attract fans of Jodie Foster's performances as well as "the yahoos who scream when evil blood is spilt." Turan said a comparison to "Ms. 45" is more apt than "Death Wish", and said "because neither Foster nor director Neil Jordan wants anyone to think they've made anything as lurid and disreputable as "Ms. 45: The Sequel", great pains have been taken to dress up "The Brave One"'s similar material in socially acceptable clothing." Turan noted that Foster objected to the film's title but director Neil Jordan and producer insisted on keeping it. Turan said that Terrence Howard makes Detective Mercer "a more involving character than he would otherwise be", but that the scenes between Foster and Howard can't redeem the film. Turan said the film contains "a series of wicked coincidences" and said "Trapped in a no man's land between seriousness and pulp trash, it plays like a combination of "Death Wish" and "The Hours"." Turan said "instead of the best of both worlds, the filmmakers have managed to deliver the worst." [cite web|url=http://www.calendarlive.com/movies/reviews/cl-et-braveone14sep14,0,7274679.story |title='The Brave One' |accessdate=2007-09-17 |author=Kenneth Turan |date=2007-09-14 |publisher=] Carla Meyer of "" gave the film 2 stars and said the film "celebrates its avenging angel as it pretends to examine her" and that "Foster's great acting can't disguise [the] exploitive nature" of the film. Meyer said "It certainly puts up a convincing front, with its moody, elegant visuals and commentary on the nature of revenge" and that the film's "biggest draw" is Foster's performance, but said that the film "sends a Foster fan into conflict. Elation at seeing a phenomenal talent really get a chance to act turns to disappointment when the film (which she also executive-produced) exposes itself as exploitation." Meyer wrote, "by the film's end, it's clear the ruminations on violence and the human heart serve only to wrap a plain ol' vigilante film in a package of thoughtfulness." [cite web|url=http://www.sacbee.com/624/story/375910.html |title=Movie review: Jodie, Jodie, Jodie |accessdate=2007-09-17 |author=Carla Meyer |date=2007-09-14 |publisher=]

"" critic gave the film a "C" and said the film is "an illegitimate heir" to "Taxi Driver", and called it "fundamentally insane." Sragow noted that there have been "bloody female revenge fables" before (like "Ms. 45") and said "The Brave One" is a "maddeningly simple yet pretentious payback fantasy." Sragow wrote that the film is "a feminist exploitation film posing as a character study." Sragrow said the script is "poorly developed" and said that "even Howard can't pull off cliched action turns", but said " steals scenes" as a wisecracking sidekick. Sragow wrote, "This film may be a crossover hit of sorts. Upscale audiences who wouldn't be caught dead at a "Death Wish" flick but adore Foster and Howard can get their cheap thrills and think they're seeing something classy and brand new." [cite web|url=http://www.baltimoresun.com/entertainment/movies/bal-to.brave14sep14,0,3558835.story |title='Brave' but bitter |accessdate=2007-09-17 |author=Michael Sragow |date=2007-09-14 |publisher=] Brian Webster of "Apollo Guide" rated the film 65 out of 100 and said the film "might have been honest, perceptive, and troubling. Instead, it becomes aimless revenge porn." Webster said it is a shame Neil Jordan was not involved in writing the screenplay. Webster wrote "what we get is another "" rip-off, with bogus relationships and a morally repugnant theme" and "we get "" woman on the prowl" instead of a "fascinating film about fear, revenge, and guilt." Webster said the film "disintegrates in its second half" and said the ending was stupid and contrived. [cite web|url=http://www.apolloguide.com/mov_fullrev.asp?CID=5478 |title=Brave One, The |accessdate=2007-09-17 |author=Brian Webster |publisher=Apollo Guide]

Carrie Rickey of the "" gave the film 2 out of 4 stars and called the film "an exploitation flick with top-flight talent and arty pretensions." Rickey said the film "resurrects a genre popular in the 1970s - the vigilante cycle of "", "" and "" - when America was embroiled in an unpopular war." Rickey said "It's tempting to read the movie as a commentary on 9/11 and Iraq, a New Yorker who seeks revenge on those who destroyed her city. This is the intent of the film that suggests that as 9/11 has forever changed America, it has altered Erica (whose name is a shorter version of America). But that would be to accept that this lurid when-women-kill film is high-minded." Rickey said Jodie Fosters's performance is the film's main appeal, calling it a "physical and psychological tour de force", but that it doesn't have the "transgressive rush" of roles played by in "Alien" or in the "Terminator" films. Rickey wrote that both Terrence Howard and Nicky Katt give "exceptional performances" and that Katt is "wryly funny." Rickey said the film "isn't sure what it thinks. Is Erica shell-shocked? An avenging angel?" and wrote "because it wants the applause both of the chatting classes and the blood crowd, "The Brave One" doesn't take a firm position about vigilantism." [cite web|url=http://www.philly.com/inquirer/columnists/carrie_rickey/20070914_Armed_-_and_fabulously_acted.html |title=Armed - and fabulously acted |accessdate=2007-09-17 |author=Carrie Rickey |date=2007-09-14 |publisher=]

The film received one Golden Globe nomination when the nominees for the were announced by the . was nominated for Best Performance By An Actress In A Motion Picture - Drama. [cite web|url=http://www.goldenglobes.org/news/id/81 |title=HOLLYWOOD FOREIGN PRESS ASSOCIATION 2008 GOLDEN GLOBE AWARDS FOR THE YEAR ENDED DECEMBER 31, 2007 |accessdate=2007-12-13 |date= |publisher=goldenglobes.org]

This film was released on DVD, Blu-Ray, and Hi-Def on , .