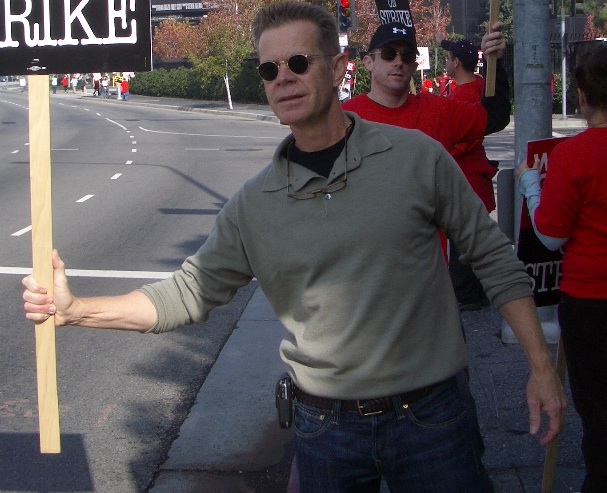 William Hall Macy, Jr. (born , ) is an -nominated, double - and -winning American actor. He is also a teacher and director in theater, film and television. His film career has been built mostly on his appearances in small, , though he has appeared in summer action films as well.

Macy was born in Miami, , and grew up in Georgia and . His father, William Hall Macy, Sr., was awarded the Distinguished Flying Cross and an for flying a bomber in ; he later ran a construction company in and worked for before taking over a -based insurance agency when Macy was nine years old. His mother, Lois, was a war widow who met Macy's father after her first husband died in 1943; Macy has described her as a "". [ [http://movies.yahoo.com/movie/contributor/1800019192/bio William H. Macy Biography - Yahoo! Movies ] ] [ [http://www.filmreference.com/film/63/William-H-Macy.html William H. Macy Biography (1950-) ] ] Macy has a half-brother, Fred Merrill, from his mother's first marriage.

Macy describes himself as a "jokester", though he was relatively shy until high school. After his brother taught him to play guitar, he sang a song in a talent show, much to the crowd's approval. He later ran for class president, though he had a poor academic record. After graduating in 1968 from in , he participated in the anti-war movement, and took copious amounts of drugs, including and . Macy studied at . By his own admission, a "wretched student," he transferred to and became involved in theatre. He moved to , , after graduating in 1971 and got a job as a bartender to pay the rent. Within a year he and , among others, founded the successful St. Nicholas Theater Company, where Macy originated roles in a number of Mamet's plays, such as "American Buffalo" and "". [cite book
last=Harris
first=Andrew B.
title=Broadway Theatre
url=http://books.google.com/books?id=SqM46zulAGwC&pg=PT123&lpg=PT123&dq=%22st+nicholas+theater%22&source=web&ots=TykO_1DuyW&sig=TMoX5Ew1R4x8-fHiqXLaMdOmShg&hl=en
accessdate=2008-04-16
year=1994
publisher=Routledge
location= |language=
isbn=041510520X
pages=98
quote=By 1975, David Mamet and the St Nicholas Theater had settled in Chicago. ]

After spending some time in , he moved to New York in 1980. While living there he had roles in over fifty and Broadway plays. One of his on-screen roles was as a turtle named Socrates in the direct to video film, "" (1984), under the name W. H. Macy. He has appeared in films that Mamet wrote and/or directed, such as "", "", "Homicide", "" (playing a role he reprised after originating the role in the play of the same name), and more recently, "", "", and "Spartan".

Macy has also had a number of roles on television, the most recent being a guest appearance on "" as the . In 2003, he won two s, one for starring in the lead role and one as co-writer of the made-for-TNT film "Door to Door". "Door to Door" is a drama based on the true story of Bill Porter, a door-to-door salesman in , born with . The film is composed of several stories, each taking up a whole period between commercials.

His work on "ER" and "" has also been recognized with Emmy nominations. His character in "ER", David Morgenstern, is responsible for a sage piece of advice that has been handed down throughout the series. In the pilot episode, when ' character, nurse , is brought to the hospital with a drug overdose, Morgenstern tells Dr. Greene () that he needs to "set the tone" to get the unit through the difficulty of treating one of its own. "You set the tone" is repeated several times in the series, once jokingly by () to Greene and at two other key moments. When Greene, dying from a brain tumor, leaves the ER for the last time, he tells Dr. Carter (), "You set the tone, Carter." It was a moment that represented the passing of the torch. And a few seasons later, in Carter's farewell episode, he passes a drunk and nauseous Dr. Morris (), a notoriously bumbling character on the show, and tells him, "You set the tone, Morris." to which an ailing Morris replies, "What?" Carter, realizing that Morris is, to say the least, not cut out of the mold of Morgenstern and Greene, smiles and tells him, "Never mind."

In a November 2003 interview with "", Macy stated that he wants to star in a big-budget "for the money, for the security of a franchise like that". He serves as director-in-residence at the in New York, where he teaches a technique called . A book describing the technique, "A Practical Handbook for the Actor" (ISBN 0-394-74412-8), is dedicated to Macy and Mamet.

In 2007 Macy starred in "", a film about middle-aged men reliving their youthful days by taking to the open road on their motorcycles from to the . Macy will appear as David "Boom Boom" Curran, a character loosely based on , in the film "" set to release in 2009. He recently completed filming on "", a comedy that co-stars and .

On June 23, 2008, the Hollywood Chamber of Commerce announced Macy and his wife, Felicity Huffman, will each receive a star on the Hollywood Walk of Fame in the upcoming year.

Since 1997, Macy has been married to Academy Award nominated actress . The couple have two daughters, Sofia Grace (born August 1, 2000) and Georgia Grace (born March 14, 2002). They live in , and have had a cabin in since the 1980s. Macy is a Lutheran. [ [http://www.oregonlive.com/special/billporter/index.ssf?/special/oregonian/billporter/carlin_071402.html OregonLive.com: 'Door to Door' brings tears to Porter's eyes ] ] He is known for his liberal leanings; he and Huffman appeared at a rally for in 2004. [ [http://www.dailyceleb.com/production/index.php?view=event&eid=2272&c

] ] [ [http://www.newsmeat.com/celebrity_political_donations/William_H_Macy.php NEWSMEAT ▷ William H Macy's Federal Campaign Contribution Report ] ] Macy also plays the and is an avid , even appearing on the cover of the specialist magazine "". He is a national ambassador for the United Cerebral Palsy Association. [ [http://www.ucp.org/ucp_generaldoc.cfm/1/3/12211/12211-12211/4258 UCP: About UCP - National Ambassadors ] ]

American post-punk/pop dance band, , perform a song entitled 'I Shot William H. Macy', appearing on their 2004 album, "Decadence". During their recent 2006 'Lashings of Lucifer' tour, amongst many big name bands, including and , upon playing this song, crowds replied with cheers and shouts of "hang H. Macy" à la ' 1986 single, 'Panic'. There is also a popular joke from "" in which combines Macy and his wife's name into "", as a jab at celebrity couples getting nicknamed by the media.

The writers and producers of "" have noted that, if a live-action version of the franchise were ever made, he would be the perfect choice to portray .Fact|date=September 2008 He made a guest appearance as himself on the Season 17 episode "."