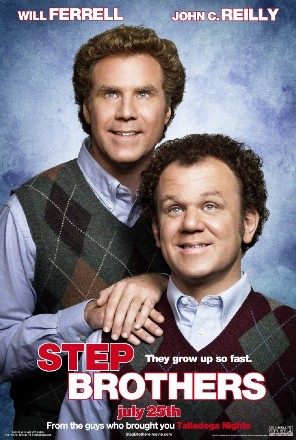 "Step Brothers" is a 2008 directed by , produced by and starring and , who last teamed up in "" (2006). The film was released on , 2008. The was written by Ferrell and McKay, from a story written by Ferrell, McKay and Reilly. and Judd Apatow are the two producers of the film.

The film has been rated R by the MPAA for "crude and sexual content, and pervasive language."

Brennan Huff (Ferrell) is a sporadically employed thirty-nine-year-old loser who lives with his mother, Nancy (). Dale Doback (Reilly) is a terminally unemployed forty-year-old who lives with his father, Robert (). When Robert and Nancy get married and move in together, Brennan and Dale are forced to live with each other as step brothers. They immediately don't like each other. Dale warns Brennan not to touch his drum set or else (Brennan feels tempted to do this). Soon after, Brennan finally plays on Dale's drum set and leaves the room before he can return. Dale enters the room and notices a chip on one of his drumsticks and confronts Brennan about it. Brennan denies this and a fight breaks out between the two after Brennan vows and makes good on his promise to "rub my nutsack on your drumset". The fight ends as Dale and Brennan strike each other at the same time with a bat and a golf club. The parents declare that the irresponsible men should find jobs or else they're out of the house. Later on, Brennan's very successful but mean brother Derek (Adam Scott) comes to visit with his family. As Brennan and Dale hide in Dale's tree house, Derek comes to mock Brennan and Dale. Angered by Derek, Dale punches Derek in the face. Brennan is in awe that Dale did something to Derek that he always wanted to do. After this occurred, Derek's long-suffering wife Alice () finds it arousing that Dale punched Derek, becoming infatuated with him. Both men eventually realize that they have a lot in common, and become best friends.

They take s at which they perform quite poorly. Walking home, Brennan and Dale decide to start their own company called "Prestige Worldwide" and encounter kids that beat up Dale on a regular basis. The kids beat up Dale and Brennan and force them to lick dog feces. At home, the parents reveal that Derek is selling the house. Dale and Brennan sabotage Derek's plans by dressing as bad neighbors (a Klansman and a respectively) and pretending Brennan had died in front of the buyers.Soon they create a to promote their singing talents being shot on Robert's boat and show it to the parents, Derek, and others at Derek's birthday party. The video reveals that the boat was crashed into rocks and Robert punishes them.

During time, the boys sleepwalk and attack Robert after he wakes them up. Angered by this, Robert forces himself to Nancy and put all the blame on them. Dale and Brennan blame each other for the divorce and go back to hating each other. They go their separate ways as they both get apartments. Brennan starts working for Derek and Dale becomes a . At a sales party for helicopters, referred to as the Fucking Catalina Wine Mixer (arranged by Brennan), the family meets again just as the band quits due to a . Robert realizes that the boys are miserable and tells them to be themselves again and go for their dream. Brennan and Dale go on stage as Prestige Worldwide and with Brennan's singing, the parents and Derek have a change of character. Robert and Nancy fall in love again and Derek regains the love for his brother. Since this, Dale and Brennan have become a successful karaoke duo. Robert and Nancy get married again and move back into the house with a new made from the destroyed boat just for Dale and Brennan.

During the end credits Brennan and Dale arrive in a and exact their revenge on the kids by beating them up.

The film has received mixed reviews. As of September 1, the film has a 53% rotten rating based on 154 reviews from critics at the review aggregator website Rotten Tomatoes. At the website , which utilizes a normalized rating system, the film earned a favorable rating of 51/100 based on 33 reviews.