Michael Rasmussen (born 1 June 1974) is a Danish professional road bicycle racer who rides for the Danish team Christina Watches-Onfone. In the 2007 Tour de France, Rasmussen, while in the yellow jersey, had his contract terminated by his team and was removed from the Tour. He served a two-year ban from July 2007 to July 2009, for lying about his whereabouts.

Specializing in climbing, Rasmussen has shown a propensity for attempting spectacular wins in mountain stages in which he breaks away from the peloton early and rides alone for most of the stage.

Michael Rasmussen is known for his care for detail when considering weight. With a staggering low weight (60 kg) he is usually one of the lightest riders in his class. He is known for peeling off unnecessary stickers from his bike, not wearing the Livestrong wristband which has become common among many Tour de France riders, due to the additional grams. He used to count each grain of rice before eating and had water with his breakfast cereal, not milk. He only carries one water bottle holder and his Colnago Extreme-C bike weighed 6.81 kg,[citation needed] only 10 g more than the minimum limit.[1]

His nickname in Danish is Kyllingen (English: The Chicken), originating from his period as a mountain biker when teammates were watching the Danish children's TV show, Bamses Billedbog, about a bear and a chicken. A large team mechanic was nicknamed Bear, and so Rasmussen was dubbed The Chicken.[2]

Rasmussen began his career as a mountain biker, and he won the Mountain Bike World Championships in 1999 before becoming a stagiaire with the professional cycling team CSC-Tiscali in 2001. There he secured a one-year contract for 2002, and following a string of good results in August and September, including his first professional win, he switched from CSC-Tiscali to Rabobank in 2003. After being sacked by Rabobank in the 2007 Tour de France, Rasmussen got a contract offer from Acqua & Sapone-Caffè Mokambo. The team's manager then decided that the move would be too expensive and thus Rasmussen was without contract.

His first Tour de France was in 2004, in which he failed to get any stage wins but was third in the mountain classification, which was won by Richard Virenque. Rasmussen then agreed with his team that he could train alone and focus on the Tour de France for 2005.

At the 2005 Tour de France his training paid off when he took the polka dot jersey on stage eight. The next day he won stage nine after riding alone for three-quarters of the course; he had broken away after 3 km and stayed clear to the finish 168 km later. He led over the first category 1 climb, the Ballon d'Alsace. In the penultimate stage (Stage 20), an individual time trial, he lost his third place after a fall at 4 km, then two bike changes, two wheel changes and a crash into a ditch. After his first fall, he lost confidence and his ability to descend at speed, said by Rabobank's sports director Erik Breukink. Rasmussen finished 77th that day and dropped from 3rd to 7th on the GC. However he needed only to finish the final stage the next day to assure his status as King of the Mountains.

Rasmussen rode the next day partially alone, saying he needed to clear his mind after the day before.[3] After becoming king of the mountains, Rasmussen wore not only the polka dot jersey, but polka dot helmet, shorts, gloves, and socks. For the final stage, he rode a polka dot bike made by Ernesto Colnago, founder of the Colnago company.[4] 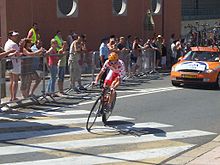 In the 2006 Tour de France, he finished well overall but he was not team leader; that honour went to the Russian, Denis Menchov. Rasmussen won the King of the Mountains polka dot jersey for the second year and claimed stage 16 in the process. On Stage 16 he broke away after 4 km and took the Souvenir Henri Desgrange, awarded to the first across the summit of the highest mountain in each year's tour, on the Col du Galibier (2645 m), winning 5000 euros. He led over all the climbs and won stage 16 by more than a minute on Carlos Sastre of Team CSC. In Paris he claimed the final polka dot jersey of the tour while holding his newly born child, who was in a polka-dot shirt and cap.

In the 2007 Tour de France he won the 8th stage from Le Grand-Bornand to Tignes, taking the Yellow jersey and polka dot jersey. On 25 July, he held a 3:10 lead on Alberto Contador, who was in second place for the yellow jersey. With four stages remaining, this made him favourite for the yellow jersey in Paris.[5] That evening however, he was withdrawn from the race and fired by his team Rabobank for "violating internal rules". Davide Cassani, an Italian retired professional rider, reported that he had seen Rasmussen in Italy in June 2007, a time when Rasmussen claimed to have been training in Mexico. The accusations were denied.[6]

Rasmussen was the center of controversy while wearing the yellow jersey in the 2007 Tour de France, when it was announced that he had been suspended from the Danish national cycling team at UCI World Championships and Olympic Games following missed doping controls.[7] Rasmussen failed to report his whereabouts for a three-week training session in Mexico and was unavailable for testing during that period; for that he received a recorded warning from the UCI.[8] Counting these missed tests together, the Danish cycling union decided to ban Rasmussen. Rasmussen said: "I do admit that I've committed an administrative error. I was informed of this at the Danish championship two and a half weeks ago, so it's no news... It might be a surprise that it comes out right now."[9] The timing of the announcement led to speculation by Patrice Clerc, then chief of the Amaury Sport Organisation, which organises the Tour de France, that the UCI had leaked the news in the middle of the Tour to damage it, as part of a dispute between the two organisations over the running of the UCI ProTour.[10] This was rejected by the UCI president Pat McQuaid, who said the timing was the choice of the Danish cycling union.

According to a multiply sourced VeloNews[11] article published on 20 July 2007, mountain bike racer Whitney Richards accused Rasmussen of trying to get him to transport a box, which Rasmussen had told Richards contained his favourite cycling shoes, to his training base in Italy in early 2002. The box turned out to contain packets of Hemopure, a bovine-hemoglobin-based blood substitute which is not currently approved for human use outside South Africa and did not become commercially available there until January 2006, and which might potentially have been used in a doping program. At the time there was no screening test for Hemopure; it is, however, banned by the WADA. Richards said he destroyed the Hemopure, at which Rasmussen is said to have grown angry and said to Richards "Have you any idea how much that shit cost?"[12]

A second journalist[13] confirmed that Richards had related the same story to him over two years ago, off the record, and claims that the incident is the one described in the epilogue of journalist David Walsh's recent book From Lance to Landis. Rasmussen had declined to comment on the story, saying only, "I cannot confirm any of that."

On 23 July 2007 he was pushed about his reluctance to deny the allegations in an interview on British TV channel ITV4 (also broadcast in a podcast). He denied any such incident and said he had not spoken to Richards for five years and was unsure what he had done to cause such allegations.[14]

On 25 July 2007, the day Rasmussen won stage 16 and virtually ensured his overall win of the 2007 Tour de France, he was fired from Rabobank and removed from the race.[6] Previously, an Italian cycling commentator for RAI and former professional road bicycle racer, Davide Cassani, telling a story about Rasmussen's intense preparations for the Tour,[15] stated he had seen Rasmussen in the Italian Dolomites on 13 June 2007, cycling in the rain. According to the schedule Rasmussen submitted to the UCI, he should have been in Mexico at that time.[16] When confronted with this accusation, according to initial press reports, Rasmussen admitted the facts to his team leader, which resulted in Rasmussen's removal from the team and the Tour.[17] Rasmussen himself later first denied that he had admitted any such thing, stating that Rabobank manager Theo de Rooij "was a desperate man on the verge of a nervous breakdown.",[18][19] but later admitted that he admitted the facts.[15] Two days later on 27 July Theo de Rooij announced his resignation from his position as team manager.[20] Rasmussen's in-laws later confirmed to the Danish newspaper BT that he had visited them in Mexico, but that they did not know where exactly he had been on 13 and 14 June 2007.[21] Rabobank backed the decision to withdraw Rasmussen but reconfirmed its commitment as a sponsor in cycling,[22] at least at the local level.[23]

On 17 December 2007, the Dutch law firm BrantjesVeerman confirmed Rasmussen had hired it to fight his dismissal from Rabobank.[24]

On 1 July 2008 the Monaco Cycling Federation, which holds Rasmussen's racing license, announced that he was banned from the sport for two years from his exclusion from the Tour de France; the ban ended on 25 July 2009.[25] Rasmussen appealed the ban to the Court of Arbitration for Sport, which upheld the ban on 22 January 2009.[26]

Rasmussen's suspension expired on 25 July 2009, and he took part in the Designa Grand Prix in Kjellerup, Denmark two days later, finishing in second place. Later that season, he won the opening stage, a time trial, and was race leader for three days,[27] in the Mexico's Vuelta a Chihuahua, as a member of Team Tecos Trek. The following season, he signed for the Italian Continental ranked team, Miche Silver Cross.[28]