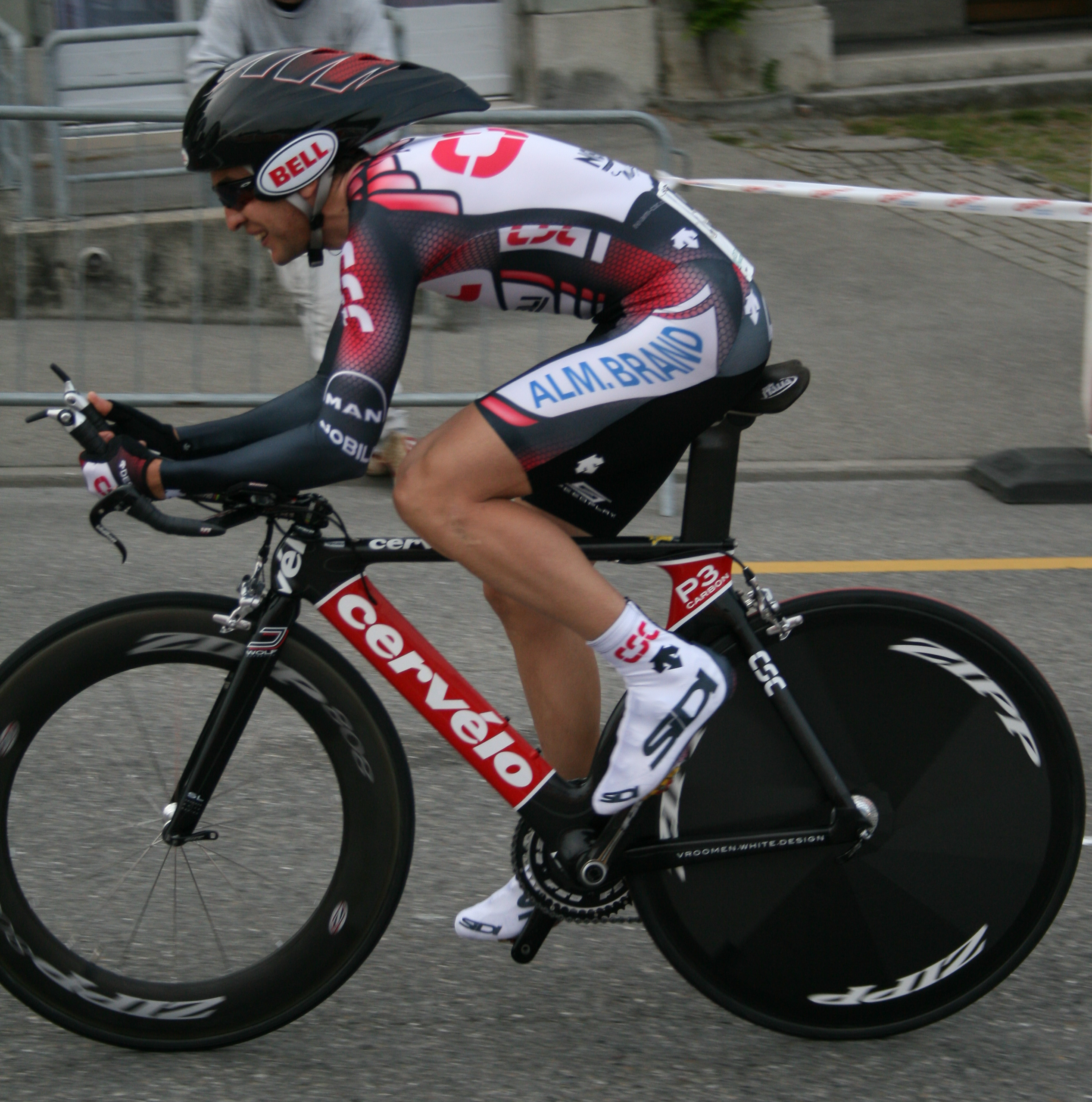 Carlos Sastre Candil (born in , ) is a Spanish professional and champion of the . Through his consistently improved top 10 results in the and good showings in the , Sastre established himself as a strong and stable , and after working to improve his skills, he has become a contender for the top GC spots in the Grand Tours.

Sastre signed his first professional contract in 1997 with Spanish team ONCE. In his five years at ONCE he mostly served as a domestique and only managed a few wins, though he showed his strength in the mountains with several good results, most notably winning the mountain competition in the 2000 Vuelta a España.

In 2002 he switched to the Danish , where he filled the role of captain in the Vuelta a España and, until 2005, had a free role in the Tour de France. This resulted in his winning the 13th stage of the , which Sastre won with a pacifier in his mouth, as a greeting to his infant daughter. Sastre finished 2 minutes 32 seconds ahead of team captain on the stage.

Before the 2004 season, Carlos Sastre and teammate trained extensively to improve their individual time trial skills, making them better all-round riders. They went to to train on 's wind tunnel. This helped Sastre improve his Vuelta a España performance, ranking 6th in the overall classification, as well as 8th in the .

In the he was a domestique for Ivan Basso, and 21st in the overall classification. However, as the captain of Team CSC's campaign, Sastre finally reached the podium of a Grand Tour, finishing in third place behind and initial winner . Heras was later disqualified due to a positive EPO test, making Sastre the second placed rider of the competition. After the Vuelta a España, he extended his contract with Team CSC for another year. In May 2006 he signed a new contract which expires after the 2008 season.

Before the in May, Sastre decided to ride the Giro d'Italia to help Ivan Basso to win, [ [http://www.team-csc.com/ny_news.asp?n_id=890 Sastre in Giro line-up] , "Team CSC", 2006] indicating that he would ride all three Grand Tours; the Giro and Tour in support of Basso and the Vuelta as team captain. In the Giro, Sastre's pace on select mountain stages helped Basso win the overall classification. Sastre finished 43rd in the GC of the 2006 Giro.

Days before the 2006 Tour de France started in July, Team CSC suspended Ivan Basso as his name was brought up in the . This meant Sastre became the CSC team captain at the 2006 Tour. Even though his main focus for the season had been the in September, this Tour was a great opportunity for Sastre to prove himself as a Tour GC contender. Through the mountain stages, Sastre proved himself the strongest mountain rider in the , beating by one minute and 59 seconds and by two and a half minutes on mountain climbs. [da icon [http://tour.tv2.dk/article.php/id-4544669.html Sastre var bedst i bjergene] , TV 2, July 22, 2006] Sastre was placed well on stage 15, and came in 2nd on both stage 16 and 17, where he closed the gap to the then yellow jersey . Before the penultimate stage of the Tour, the stage 19 individual time trial, Sastre was the second placed rider overall, trailing race leader Óscar Pereiro by 14 seconds. However, on the final time trial, which stretched 57 kilometres between and , Sastre finished 20th, losing several minutes to Pereiro, eventual overall winner Floyd Landis and Andreas Klöden, who took third place overall. Sastre thus finished the 2006 Tour in 4th place. Floyd Landis has since been stripped of this title, making Sastre 3rd in the 2006 Tour de France.

By completing the Vuelta, Sastre, who also rode the Giro d'Italia and Tour de France in 2006, became one of a rare breed of riders to finish all three Grand Tours in one year.

Coming into the , Sastre was considered one of the favourites to win the race along with Australia's of Team , Spain's Alejandro Valverde of Caisse d'Epargne and Russia's of Rabobank. He also faced competition within his own team from brothers Andy and , despite officially being the leader of Team CSC.

Sastre had a quiet, understated opening to the tour. After a lackluster opening time-trial, he remained relatively restrained in the opening mountain stages in the and opted to stay defensive and follow the wheel of his main rivals. This allowed his CSC teammate Fränk Schleck to claim the at the finish to stage 15 at Prato Nevoso. However, on the crucial 17th stage, Sastre showed his class and mountain climbing prowess, attacking at the bottom of the final climb of the day, , to claim the stage and the yellow jersey. Sastre, knowing Cadel Evans to be a strong time-trialist (the time trial being raced on the penultimate day of the race) sought to gain a lead over Evans by a couple of minutes, knowing that a lead of only a few seconds probably would not fare well for him going into the upcoming time trail. He achieved this goal, and with a superb time trial, wrote himself into the records books as the winner of the 2008 Tour of France.

Going into the final time trial, Sastre had an advantage of 1 minute and 24 seconds over his teammate Fränk Schleck, although more crucially he had 10 seconds more over Cadel Evans, a man considered a more accomplished time trialist than himself. Evans was widely expected to overcome the deficit to leapfrog Sastre. However, Sastre managed to hold onto his lead in the time trial, finishing the Tour with a 58 second lead.

Sastre's victory capped an exceptional 2008 tour for the Danish . CSC also won the with and the overall team classification, as well as 2 stages, the latter being won by Carlos Sastre, on l'Alpe d'Huez.

Carlos Sastre contract with CSC will expire in of , so many rumours about Sastre future where on the headlines since the win of the Tour de France. After many newspapers confirmed his transfer to the new Russian team , Sastre denied this and it was announced on the 5th of September 2008 that he signed a contract with the new team for 2009.