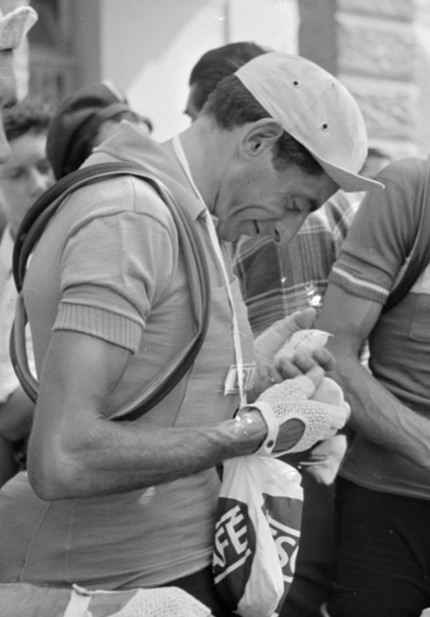 Coppi was born in Castellania, ().

Coppi's racing days are generally referred to as the beginning of the "Golden Years of the Cycle Racing". An important factor is the competition Coppi had with (who helped win Coppi an appointment as a domestique in his team at the end of the 1939 season, and supported Coppi's 1940 Giro victory after an early crash robbed Bartali of overall victory). When Bartali and Coppi, the greatest Italian cyclists of all time, met it was the most famous rivalry of cycle racing history and Italian fans ("tifosi") divided into e "coppiani" and "bartaliani".

Coppi's late career was shaped by fate: in 1951 his teammate and younger brother, , fell in a sprint in the Giro del Piemonte. After returning to his hotel, Serse had a and died (a parallel with Bartali, who also lost a brother, Giulio, in a 1936 racing accident). Fausto broke several bones in his career. In 1953 Coppi left his wife to live with , "la Dama Bianca" ("the lady in white"). In the Italy of the 1950s this was a scandal. Their love was portrayed in the 1993 film "Il Grande Fausto". Coppi and his companion were condemned legally and morally. Coppi continued his career but could never match his old successes.

At the end of 1959, on a cycling and game-hunting trip in the African Upper Volta (now ), Coppi caught . When the illness broke out after his return to Italy, it was not recognized in time for effective treatment. Coppi died at 40 in the hospital of .

Although the success list of Merckx is without a doubt longer than Coppi's, many experts call Coppi the greatest cyclist of all time (see next section). To this day, the Giro remembers Coppi as it goes through the mountain stages. A mountain bonus, called the "", is awarded to the first rider who reaches the Giro's highest summit. In 1999, Coppi placed second in balloting for greatest Italian athlete of the 20th century.

Despite the impressive wins of Eddy Merckx, some believe that the best cyclist of all-time is Coppi. This conviction is founded on three points:
# Coppi raced in a period when travelling (particularly across international borders) was far more difficult than twenty years later. Like Gino Bartali, Coppi lost five years of his career due to World War II during which he was taken prisoner by the British.
# While Eddy Merckx won his first Giro d’Italia when he was 23 (in 1968), and arrived second in a major stage race when he was 30 (, behind ), Coppi won his first Giro (his first professional race) in 1940, when he was 20, and lost a Giro d’Italia by only 11” when he was 35 (in 1955, behind ).
# Eddy Merckx created his devastating victories beating many truly great racers&mdash;his Italian archrival ; the Belgians (great one-day racer), , ; French ; Dutch ; and Spaniards and . This was probably the greatest concentration of cycling talent since 1950: Anquetil, Hinault and Armstrong all defeated foes undeniably inferior. But Fausto Coppi won all that he won in arguably the greatest stretch of all time. First, in a century of cycling, only in 1940 did two champions like Coppi and Bartali race simultaneously&mdash;in Italy it was impossible to not choose between the two men. At that time there were other cyclists who would have dominated other periods: the Italian Third Man , all-time Swiss greats and , Belgians and , French and .

All that does not mean that Merckx is inferior with respect to Coppi, but rebalances the situation. An Italian cycling historian, Gian Paolo Ormezzano, says that the Italian has been the greatest of all time, while the Belgian has been the strongest.