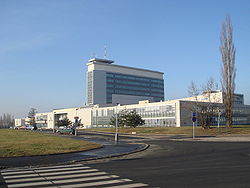 The direct predecessor of Česká televize was (since 1 May 1953) Czechoslovak Television (Československá televize, ČST).

Česká televize was founded on 1 January 1992 under the Czech Television Act as a public service broadcaster. It broadcast on the former ČTV channel and produced content for channel F1 (federal) of the joint Czechoslovak television service until the end of 1992, when Czechoslovakia peacefully dissolved into the Czech Republic and Slovakia and ČST was abolished.

From 1 January 1993 to 3 February 1994 it broadcast three channels in the Czech Republic - ČT1 (formerly ČTV), ČT2 (formerly F1), and ČT3 (formerly OK3) - until one frequency was given to the new station TV Nova, the first commercial TV channel in Central and Eastern Europe.

The "Czech TV crisis" occurred at the end of 2000 and lasted until early 2001 as a battle for control of the airwaves, which included jamming and accusations of censorship. During the Czech TV crisis, Czech TV reporters organized an industrial dispute by staging a sit-in and occupying the news studio and rejected attempts by Jana Bobošíková to fire them. They were supported in their protest by politicians such as the then President Václav Havel and by Czech celebrities, but every time they tried to air their news broadcasts, Bobošíková and Jiří Hodač would jam the transmission either with a "technical fault" screen reading: "An unauthorized signal has entered this transmitter. Broadcasting will resume in a few minutes", or with their own news broadcasts featuring Jana Bobošíková and a team she had hired to "replace" the staff members she had sought to terminate. The Czech TV crisis eventually ended in early 2001, following the departure from Czech TV of Hodač and Bobošíková, under pressure by the street demonstration participants and at the request of the Czech Parliament, which had held an emergency session due to the crisis.

Česká televize is funded through television licence fees (larger part of revenue) and from advertising (where it is less successful than commercial television stations). During 2004 and 2005 the organisation lobbied the Czech government to increase the licence fee so that advertising could be eliminated.

Media occasionally raise questions about how much Česká televize is able to withstand pressure both from the governing parties and the opposition and maintain unbiased and critical coverage of politics.

The current General Manager of Česká televize is Jiří Janeček, who was elected for a six-year term by the Czech Television Council (Rada České televize).