Croydon North is a parliamentary constituency represented in the House of Commons of the Parliament of the United Kingdom. It elects one Member of Parliament (MP) by the first past the post system of election. The current Member of Parliament is Malcolm Wicks of the Labour Party, who has one of the largest Labour majorities in London, despite being the first ever Labour MP for the area.

Croydon North is by far the most urban of Croydon's three seats, consisting for the most part of row upon row of modest terraced houses, liberally littered with tower blocks, much of it social and ex-social housing.

There is a London Overground service to Croydon, and the seat is well connected to central London by suburban rail services. There has been some regeneration since 2000 with new-build developments for middle-class commuters.

The seat includes Crystal Palace FC's ground at Selhurst Park and the North Eastern tip of the seat is near the site of the former Crystal Palace itself. 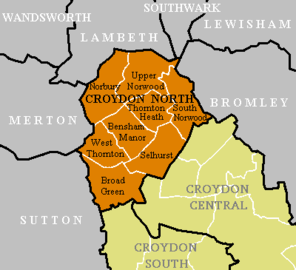 The constituency covers the north west of the London Borough of Croydon and includes Thornton Heath, Norbury, Selhurst and parts of South and Upper Norwood. It is made up of eight electoral wards from the borough:

Croydon's three constituencies are contiguous with the boundaries of the London Borough of Croydon. Croydon North borders the seats of Carshalton and Wallington, Mitcham and Morden, Streatham, Dulwich and West Norwood, Beckenham, Croydon Central, and Croydon South.

Following their review of parliamentary representation in South London, the Boundary Commission for England made minor changes to the constituency. Parts of Broad Green ward and South Norwood ward were transferred to Croydon North from Croydon Central constituency.