Chingford and Woodford Green is a borough constituency in Greater London which is represented in the House of Commons of the Parliament of the United Kingdom. It elects one Member of Parliament (MP) by the first past the post system of election.

The existing boundaries of Chingford and Woodford Green (changed for the 2010 general election) take in a large slice of the London Borough of Waltham Forest. The constituency includes Chingford in the north bordering Enfield down through Highams Park and Hatch Lane into Woodford. Two wards in the neighbouring London Borough of Redbridge, Church End and Monkhams, are included in the seat. 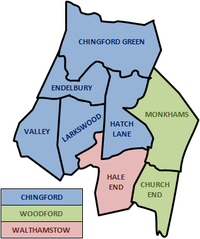 Wards of the constituency (not affected by 2010 election boundary changes)

The constituency was created in 1997 from parts of the former seats of Chingford and Wanstead & Woodford. Both seats previously had well-known MPs, namely Norman Tebbit and Winston Churchill respectively. Iain Duncan Smith had been MP for Chingford since 1992 and continued as MP for this constituency. Churchill had served from 1945 to 1964 as MP for the Woodford part of the new constituency; prior to 1945, both Woodford and Chingford were in the Epping county constituency, for which Churchill was also MP.