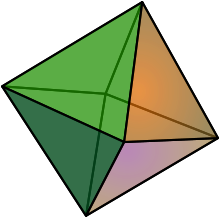 In music theory, the hexany is a six-note just intonation scale, with the notes placed on the vertices of an octahedron, equivalently the faces of a cube. The notes are arranged so that every edge of the octahedron joins together notes that make a consonant dyad, and every face joins together the notes of a consonant triad.

This makes a "musical geometry" with the geometrical form of the octahedron. It has eight just intonation triads in a scale of only six notes, and each triad has two notes in common with three of the other chords, arranged in a musically symmetrical fashion due to the symmetry of the octahedron it is based on.

The Hexany is the invention of Erv Wilson[1] and represents one of the simplest structures found in his Combination Product Sets, which are obtained as successive cross sections of an n-dimensional cube. The numbers of vertices follow the numbers in Pascal's triangle. The hexany is the third cross section of the four-dimensional cube. "Hexany is the name that Erv Wilson gave to the six notes in the 2-out-of-4 combination product set (abbreviated as 2\4 CPOS)."[2] 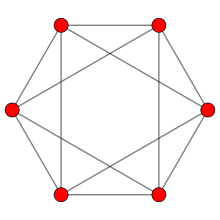 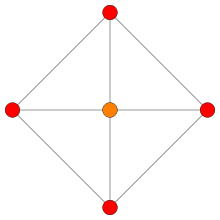 The four dimensions of the hypercube are usually tuned to distinct primes (sometimes to odd numbers) and a single step in each dimension corresponds to multiplying the frequency by that prime. The notes are then usually reduced to the octave (by repeated division by 2) using octave equivalence.

You can see the tetrahedral slices of the hypercube similarly - the red vertices can be joined together to make a regular tetrahedron, and the purple vertices likewise. So going from one of the blue points to the other you have 1 vertex, 4 for the red tetrahedron, 6 vertices for the yellow octahedron (hexany), 4 for the purple tetrahedron and 1 more vertex to make up the complete cube.

If one finds it a bit baffling that's to be expected — a few people, like Alicia Stott, have been able to think four-dimensionally but it is beyond most of us.

Musical lattices are often constructed with the octave dimension omitted. Then the hexanies show up in the 3D lattices as octahedra between the alternating otonal and utonal tetrahedra (for tetrads). However the octave (2) dimension is shown in the diagram above to bring out its 4D context, and help make the connection with the Pascal's triangle construction via the hypercube.

This figure shows the hexany in its more usual 3D representation:

The complete row of Pascal's triangle for the hypercube in this construction runs 1 (single vertex), 4 (tetrahedron tetrad), 6 (hexany), 4 (another tetrad), 1. The idea generalises to other numbers of dimensions – for instance, the cross-sections of a five-dimensional cube give two versions of the dekany – a ten-note scale rich in tetrads, triads and dyads, which also contains many hexanies.

In six dimensions the same construction gives the twenty-note eikosany which is even richer in chords. It has pentads, tetrads, and triads as well as hexanies and dekanies.

In the case of the three-dimensional cube, it is usual to consider the entire cube as a single eight-note scale, the octany – the cross-sections then are 1, 3 (triad), 3 (another triad), 1, taken along any of the four main diagonals of the cube.

Coordinates for the Pascal's triangle of combination product sets

The octahedron there is the edge dual of the tetrahedron, or rectified tetrahedron

So - the geometric figure for the eikosany is the 2D face dual of the 5-simplex or birectified 5-simplex. Similarly for the 3)7, 3)8 etc figures in all higher dimensions.