Turkish makam's closest relatives include maqam in Arab music and echos in Byzantine music. The Turkish makams, the Arab maqams and the Byzantine echos, were originally derived from Persian dastgahs still in use today. Some theories suggest the origin of Makam to be the city of Mosul in Ottoman empire Iraq. "Mula Othman Al-Musili," in reference to his city of origin, is said to have served in the Ottoman Palace in Istanbul and influenced Turkish Ottoman music. More distant modal relatives include those of Central Asian Turkic musics such as Uyghur music, muqam and Uzbek music, shashmakom. The raga of Hindustani (North Indian) classical music employs similar modal principles. Some scholars find echoes of Turkish makam in former Ottoman provinces of the Balkans.[2] All of these concepts roughly correspond to mode in Western music, although their compositional rules vary.

The rhythmic counterpart of makam in Turkish music is usul.

The basic notes named according to the solfege system and thus, for example, "Do" is C and "Re" is D.

In Turkish music theory, one whole tone is divided into nine commas. The following figure gives the comma values of Turkish accidentals. In the context of the Arab maqam, this system is not of equal temperament. In fact, in the Western system of temperament, C-sharp and D-flat—which are functionally the same tone—are equivalent to 4.5 commas in the Turkish system; thus, they fall directly in the center of the line depicted above.

Unlike as in Western music, where the note C, for example, is called C regardless of what octave it might be in, in the Turkish system the notes are—for the most part—individually named (although many are variations on a basic name); this can be seen in the following table, which covers the notes from middle C ("Kaba Çârgâh") to the same note two octaves above ("Tîz Çârgâh"):

The names and symbols of the different intervals is shown in the table below: 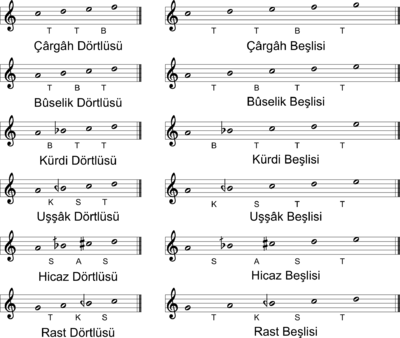 Tetrachords (dörtlü) are on the left, pentachords (beşli) on the right. The symbols (simge) from the table above are here used to signal the intervals used in these patterns

Similar to the construction of maqamat noted above, a makam in Turkish music is built of a tetrachord built atop a pentachord, or vice versa (trichords exist but are little used). Additionally, most makams have what is known as a "development" (genişleme in Turkish) either above or below, or both, the tonic and/or the highest note.

There are also 6 basic pentachords with the same names with a tone (T) appended.

It is worth keeping in mind that these patterns can be transposed to any note in the scale, so that the tonic A (Dügâh) of the Hicaz tetrachord, for example, can be moved up a major second/9 commas to B (Bûselik), or in fact to any other note. The other notes of the tetrachord, of course, are also transposed along with the tonic, allowing the pattern to preserve its character.

A makam, more than simply a selection of notes and intervals, is essentially a guide to compositional structure: any composition in a given makam will move through the notes of that makam in a more or less ordered way (in this, it resembles a tone row à la Schoenberg or Webern). This pattern is known in Turkish as seyir (meaning basically, "route"), and there are three types of seyir:

As stated above, makams are built of a tetrachord plus a pentachord (or vice versa), and in terms of this construction, there are three important notes in the makam:

Additionally, there are three types of makam as a whole:

This makam is thought to be identical to the Western C-major scale, but actually it is misleading to conceptualize a makam through western music scales. Çargah consists of a Çârgâh pentachord and a Çârgâh tetrachord starting on the note Gerdaniye (G). Thus, the tonic is C (Çârgâh), the dominant G (Gerdaniye), and the leading tone B (Bûselik). (N.B. In this and all subsequent staves, the tonic is indicated by a whole note and the dominant by a half note.)

The Çârgâh makam though is very little used in Turkish music, and in fact has at certain points of history been attacked for being a clumsy and unpleasant makam that can inspire those hearing it to engage in delinquency of various kinds.

This makam has two basic forms: in the first basic form (1), it consists of a Bûselik pentachord plus a Kürdî tetrachord on the note Hüseynî (E) and is essentially the same as the Western A-minor; in the second (2), it consists of a Bûselik pentachord plus a Hicaz tetrachord on Hüseynî and is identical to A-harmonic minor. The tonic is A (Dügâh), the dominant Hüseynî (E), and the leading tone G-sharp (Nim Zirgüle). Additionally, when descending from the octave towards the tonic, the sixth (F, Acem) is sometimes sharpened to become F-sharp (Dik Acem), and the dominant (E, Hüseynî) flattened four commas to the note Hisar (1A). All these alternatives are shown below:

In Turkey, the particular Muslim call to prayer (or ezan in Turkish) which occurs generally in early afternoon and is called ikindi, as well as the day's final call to prayer called yatsı, is often recited using the Rast makam.

This makam consists of an Uşşâk tetrachord plus a Bûselik pentachord on the note Neva (D); this is labelled (1) below. The tonic is A (Dügâh), the dominant—here actually a subdominant—is D (Neva), and the leading tone—here actually a subtonic—is G (Rast). Additionally, there is a development in the makam's lower register, which consists of a Rast pentachord on the note D (Yegâh); this is labeled (1A) below.

In Turkey, the particular call to prayer which occurs around noon and is called öğle is most often recited using the Uşşak makam.