Such chords are referred to as triadic.

Some twentieth-century theorists, notably Howard Hanson[2] and Carlton Gamer,[3] expand the term to refer to any combination of three different pitches, regardless of the intervals amongst them. The word used by other theorists for this more general concept is "trichord.[4]

The root tone of a triad, together with the degree of the scale to which it corresponds, primarily determine a given triad's function. Secondarily, a triad's function is determined by its quality: major, minor, diminished or augmented. Three of these four kinds of triads are found in the Major (or diatonic) scale.

Triads (or any other tertian chords) are built by stacking every other note of a Diatonic scale (e.g., standard major or minor scale). For example, C-E-G spells a triad by skipping over D and F. While the interval from each note to the one above it is a third, the quality of those thirds varies depending on the quality of the triad:

The above definitions spell out the interval of each note above the root. Since triads are constructed of stacked thirds, another way to define each triad is as follows:

Each triad found in a diatonic key corresponds to a particular diatonic function. Functional harmony tends to rely heavily on the primary triads: triads built on the tonic, subdominant, and dominant degrees.[5] The roots of these triads begin on the first, fourth, and fifth degrees (respectively) of the diatonic scale, otherwise symbolized: I, IV, and V (respectively). Primary triads, "express function clearly and unambiguously."[5] The other triads of the diatonic key include the supertonic, mediant, sub-mediant, and sub-tonic, whose roots begin on the second, third, sixth, and seventh degrees (respectively) of the diatonic scale, otherwise symbolized: ii, iii, vi, and viio (respectively). They function as auxiliary or supportive triads to the primary triads. 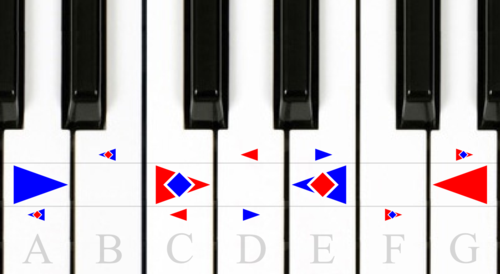 Major and minor triads on the white piano keys. (file)

Rock music uses triads as its, "primary harmonic structures throughout the rock era."[6] Examples of pieces which are based mostly on triads include Buddy Holly's "That'll Be The Day", The Beatles' "Hey Jude", Three Dog Night's "Joy To The World", and Bobby McFerrin's "Don't Worry, Be Happy", each from a successive decade beginning with the fifties.[6]