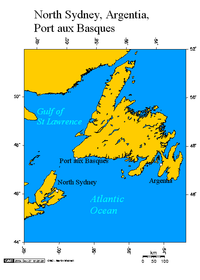 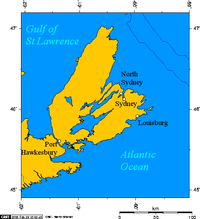 Located on the north side of Sydney Harbour, along the eastern coast of Cape Breton Island, North Sydney is an important port in Atlantic Canada as it is the western terminus of the Marine Atlantic ferry service. It acts as the marine link for the Trans-Canada Highway to the island of Newfoundland, which is why North Sydney's nickname is called The Gateway To Newfoundland.

Marine Atlantic ferries currently operate from North Sydney's terminal to the ports of Port aux Basques and Argentia. The company is one of the largest employers in the area.

North Sydney emerged as a major shipbuilding centre in the early 19th century building many brigs and brigantines for the English market and later moving on to larger Barques and, in 1851, the full rigged ship Lord Clarendon, the largest wooden ship ever built in Cape Breton. Wooden shipbuilding declined in the 1860s but the same decade saw the arrival of increasing numbers of steamships drawn to North Sydney for bunker coal. By 1870 it was the fourth largest port in Canada dealing in ocean-going vessels, drawn for coal and due to the fact that The Western Union cable office had been established here in 1875. The railroad came to Cape Breton Island in 1891. At this time there were 2,513 people in North Sydney, compared to 2,417 in Sydney.

In 1898 North Sydney was chosen by the Reid-Newfoundland Company as the Canadian mainland terminal for a ferry service to Newfoundland; in June of that year the SS Bruce sailed from Port Aux Basques, it was the first ship to make that run.

During the First (Great War) and Second World Wars, North Sydney played an important role in the relay of information from Europe to both Ottawa and Washington, D.C.. North Sydney was home to a Western Union Cable office. It was here where coded messages were sent from overseas then relayed on to the rest of North America.

On the morning of November 10, 1918, the office received a top-secret coded message from Europe. It stated that effective at 11 am the next day (November 11, 1918) all fighting would cease on land, sea and in the air.

Therefore the people of North Sydney, in particular Mrs. Annie Butler Smith, were the first to know about the end of the Great War. It is reported that on the night on November 10, 1918, over 200 servicemen celebrated by marching through the streets of the town to celebrate the end of the war, one day before the rest of the world knew.

On the night of October 13, 1942, the SS Caribou (a passenger ferry) left North Sydney harbour for Port aux Basques with 237 on board.

At 3:40 am on the morning of October 14, the Caribou was hit with a single torpedo on her starboard side. 136 people perished.

During the Great War, the United States Navy operated an air base in North Sydney. The base was primarily used as a landing/launching area for seaplanes. Known as NAS North Sydney the base was originally located at Indian Beach while more permanent facilities were built at nearby Kelly's Beach (now called Munroe Park). The base was given the Naval postal address of "139 FPO New York" and the signal code "ALML". In command was Lt. Robert Donahue of the U.S. Coast Guard who operated under the direction of U.S. Navy Lt. Richard E. Byrd who was based in Halifax. The Kelly's Beach base closed in early 1919 but was re-activated by the Royal Canadian Air Force during World War II.

Panorama of the harbour

Even though North Sydney does not have a big arts community, it has served as the back drop for three movies.

In 1995, scenes for Margaret's Museum were filmed in the town. Most were shot on King Street, where a house was used as a mine managers house.

The other film from this year was a CBC made for TV movie named Win Again, starring Gordon Pinsent. This time, North Sydney posed as a small town in Newfoundland. The closing scene of the movie has a nice shot of the whole town, taken from a large crane from the downtown area.

The only public hospital in the northside is in North Sydney, it is the Northside General Hospital. It covers healthcare for the entire northside area of Cape Breton. There is another hospital on the northside and that hospital is the Harbourview Veterans Hospital, this hospital also has a ward for physio and hearing and speech, but no out patients or emergency wards. The Northside General has 5 floors not including the ground floor. The hospital doesn't perform any major surgeries, but it does have an emergency room, that's not open all the time. It has scheduled closures. In that case people would have to go to the Cape Breton Regional Hospital, in Sydney.

There are two elementary schools in town, Seton Elementary and St. Joseph's Elementary. Saint Joseph's Elementary was once part of a complex which included Saint Mary's Elementary, but St. Mary's was demolished in March 2008 to make way for a new multi million dollar school, now named Fairview Elementary. There is a junior high in North Sydney and its called Thompson Jr. High. There is no high school in North Sydney. All the students attend Memorial Composite High School, in the neighboring town of Sydney Mines. Memorial is the high school for the entire Northside area.

North Sydney is also host to the Maritime Drilling School. Students from all over the world attend this institution to learn how to work on oil rigs.

North Sydney is home to the Cape Breton County Farmer's Exhibition. Held every August, the Exhibition is quite possibly the largest tourist attraction in the town. People from all over Industrial Cape Breton attend the event, while there are exhibitors from all over the Atlantic Provinces. The main attraction, however, is not the midway with all of its rides and games, but rather the agricultural and cultrual displays. This also includes horse riding presentations such as barrel racing, skills competitions,and draft horse competitions.

Started in 1916, the Exhibition started in Sydney and a few years later relocated to its present location at the top of Regent Street.