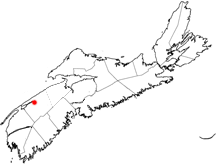 Annapolis Royal (2006 Population 444) is a Canadian town located in the western part of Annapolis County, . Known as Port-Royal to until being renamed in 1710 by Britain, the town is located in an area that claims to have the second oldest continuous European settlement in North America after .

The community is situated at the western end of the fertile , nestled between the North and South mountains which define the valley. The is just over the North Mountain, 10 kilometers out of town, and forms the waterfront for this historic town on the southern bank of the at the mouth of Allains Creek. Directly opposite Annapolis Royal on the northern bank of the river is the community of Granville Ferry.

The original French settlement at Port Royal, known as the , was settled by and in 1605. This site is approximately convert|10|km|mi|abbr=on west of present-day Annapolis Royal at the mouth of the on the .

The first settlement was abandoned after being destroyed by British attackers in 1613 and a second settlement was established by France at present-day Annapolis Royal. [http://www.thecanadianencyclopedia.com/index.cfm?PgNm=TCE&Params=A1ARTA0002923] It was also called Port-Royal and it developed into the capital of the French colony of . Port-Royal prospered for nearly a century, though it was subject to frequent attacks and capture by British military forces or those of its , only to be restored each time to French control by subsequent recapture or treaty stipulations. Acadia remained in French hands throughout most of the 17th century.

In 1710, Port-Royal surrendered for the last time to British forces who renamed it Annapolis Royal after Queen Anne (1665-1714), the reigning monarch. The name is formed through a mix of the former French name Port-Royal and combining the queen's name with that of 'polis', the Greek word for . The French fort was renamed and established as a British garrison. The Fort, built originally around 1703, was designed to defend the capital from seaward attack. Today, much of the original earthen embankments are preserved for tours by the public, as well as some buildings original to the military facility and the . The oldest cemetery in Canada, dating back to the French and later the British. The oldest gravestone in Canada is among the graves...Bethiah Douglas, 1710.

Under the in 1713, Acadia was granted to the British; however the vague boundary definitions saw only the peninsular part of Nova Scotia granted to Britain, and the next half century would be turbulent years as Britain and France acted out the final struggle for Acadia and North America.

Annapolis Royal served as the first capital of the Colony of Nova Scotia from 1710 until the founding of Halifax in 1749. Incorporation as a town under the provincial municipalities act took place in 1893. The , and the all take their name from the town. Under the French reign, Annapolis River had been known as Rivière Dauphin.

Since the early 20th century, the outskirts of the town has been the site of a bridge connecting the south side of the Annapolis River to the north side at Granville Ferry; before the bridge, there was a ferry connection. In 1961, the bridge was replaced with a causeway or and in 1984, as part of 's project, the causeway was incorporated as part of the Annapolis Royal Tidal Power Generating Station.

The construction of the tidal generating station at Annapolis Royal by the then-provincially owned electrical utility was part of a pilot project to investigate this alternative method of generating electricity. It is the first and only tidal power facility in operation in North America. The generating station has created tangible environmental changes in water and air temperatures in the area, siltation patterns in the river, and increased erosion of the river banks on both sides of the dam.

The trains of the ceased operations in 1990, bringing much industrial commerce within the confines of Nova Scotia's smallest town to a halt. Today, after many years of neglect, the old brick railway station is being privately renovated into professional office space.

The fleet of scallop boats moored in the Annapolis Basin continue to generate millions of dollars of economic activity each year, and support many businesses in the Annapolis Royal area. Fort Anne, contained within the boundaries of the town, was designated as a National Historic Site in 1917 and is a natural tourist attraction. The town also contains the largest Registered Historic District in Canada, as well as a waterfront boardwalk, a variety of unique shops, and many mature trees. Visitors can enjoy a fine selection of Bed & Breakfast accommodations, the (established in 1986), and a number of historical walking tours. During the summer, late night, guided candle light Garrison Cemetery tours are available and very popular. An added benefit is the scenery of the surrounding countryside, much of which is agricultural. The mild climate and scenic location make this a favourite destination in all seasons. Nova Scotia's largest amusement park, Upper Clements Park, was built several kilometres west of the town in nearby Upper Clements.

The town, along with most of Annapolis and Digby counties, experienced a severe economic decline during the mid-1990s after a nearby military training base, , was closed as a result of defence budget cuts. The former base located on the shores of the Annapolis Basin in Cornwallis is now the site of an international training centre, and an innovative industrial park for small businesses.