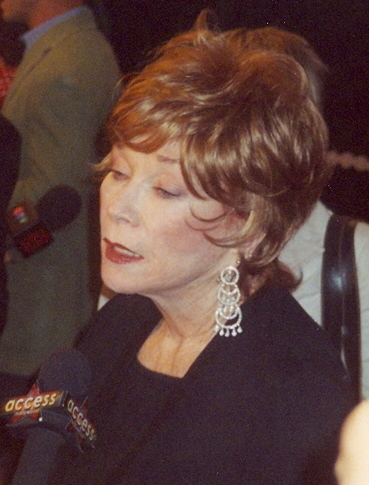 Shirley MacLaine (born , ) is an American Academy Award-winning and , well-known not only for her acting, but also now for her beliefs in and . She is also the writer of a large number of autobiographical works, many dealing with her spiritual beliefs as well as her career. She is the older sister of .

Named after , MacLaine was born Shirley MacLean Beaty in . Her father, Ira Owens Beaty, [ [http://www.newenglandancestors.org/education/articles/research/special_guests/gary_boyd_roberts/gbr83.asp New England Historic Genealogical Society ] ] was a professor of psychology, public school administrator and real estate agent, and her mother, Kathlyn Corinne (née MacLean), was a -born drama teacher; her grandparents were also teachers. The family was devoutly . [ [http://www.adherents.com/people/pb/Warren_Beatty.html The religion of Warren Beatty, actor, director ] ] [ [http://www.berkeley.edu/news/media/releases/2005/05/21_beatty.shtml Actor Warren Beatty gives public-policy graduates — and Gov. Schwarzenegger — some advice on power ] ] MacLaine's father moved the family from Richmond to and then to while she was still a child, then to between 1932-1936, eventually taking a position at Arlington's Jefferson Middle School. The Beaty family lived in a house in the Western part of the county off Wilson Boulevard where it was said that Shirley and brother, Warren, were known around their neighborhood as troublemakers in their pre-adolescent days.

Her early childhood dream was to be a ballerina. She took ballet fervently all throughout her youth and never missed one class, and whenever they performed a piece, she would play the boy's role, due to being the tallest one there. She was so determined and so set on being a dancer that her recurring childhood nightmare was that she missed the bus to class. She finally got to play a respectable woman's role, the Fairy Godmother in "Cinderella," and while warming up backstage, she snapped her ankle. Many would bow out in this particular situation, but she was so determined that she simply tied the ankle ribbon on her toe shoes extra tight and went "on with the show." After it was over, she called for an ambulance.

Eventually, MacLaine decided that professional ballet was not for her. She said that she did not really have the right body type and that she did not want to starve herself. Also, her feet were not good enough (she did not have really high arches and insteps). Nor was she of "exquisite beauty." At that point, she decided to switch her focus to acting. She attended Washington-Lee High School, where she was on the cheerleading squad and acted in the school's productions. The summer before her senior year, she went to New York to try acting on Broadway with some success. After she graduated, she went back and within a year she achieved her goal of becoming a star when she became an understudy to actress in ""; Haney broke her ankle, and MacLaine replaced her.

A few months after, with Haney still out of commission, director-producer was in the audience, took note of MacLaine, and signed her to go to to work for . She would later sue Wallis over a contractual dispute, a suit that is credited with having ended the old-style studio system of actor management. ["Hanrihan v. Parker", 19 Misc. 2d 467, 469 (N.Y. Misc. 1959)]

Her first film was the film "" in 1955, which won her the . In 1958, she took part in "" and "Around the World in Eighty Days". At the same time, she starred in ""; this film gave her her first Academy Award nomination - one of the film's five Oscar nods - and a Golden Globe nomination. She also starred in a lesser known film called "The Children's Hour" also starring Audrey Hepburn, based on the play by . She got her second nomination two years later for "", starring with . The film won 5 Oscars, including Best Director for . She was nominated for "" (1963), once again reunited with Wilder and Lemmon. In 1975, she received a nomination for Best Documentary Feature for her "". Two years later, she was once again nominated for "The Turning Point", along with co-star . In 1983 she won her first Oscar for "". The film won five Oscars; one for and three for director . She went on to star in other major films, like "" with . She made her feature-film directorial debut in the quirky film "," written by then new-comer in his Disney-Meets-David Lynch style. MacLaine starred as Helen in this film, which was released to video under the title "". In 2007 she completed "", directed by and starring .

MacLaine is also set to star in , a drama. The production has been delayed due to 's stint in rehab.

As of 2004, she is the only actress to win a for Best Actress (Drama) without getting an Oscar nomination for the same performance, for "" (1988).

MacLaine has a star on the at 1615 Vine Street.

MacLaine was married to businessman Steve Parker until they divorced in 1982. They had a daughter, (born 1956).

MacLaine's interest in is very strong and long-lived. Many of her best-selling books, such as "Out on a Limb" and "Dancing in the Light" have it as their central theme. Her beliefs have compelled her to explore herself and the world. This includes walking and working with . Fact|date=March 2008

MacLaine found her way into many casebooks when she sued for . She was to play a role in a film titled "Bloomer Girl", but the production was cancelled.

Twentieth Century-Fox offered her a role in another film, "Big Country, Big Man", in hope of getting out of its contractual obligation to pay her for the cancelled film. MacLaine's refusal led to an appeal by Twentieth Century-Fox to the in 1970, where the Court ruled against Fox. "", 474 P.2d 689 (Cal. 1970).

She shares a birthday with which they celebrate together every year.Fact|date=March 2008 She now lives in northern New Mexico.