Kings County is a county in the Canadian province of Nova Scotia.

Kings County is located in central Nova Scotia on the shore of the Bay of Fundy with its northeastern part also forming the western shore of the Minas Basin.

The part of the county residing in the Annapolis Valley comprises the agricultural heartland of the province and boasts over 600 farms; the area is famous for its fruit crops, primarily apples. As with most coastal parts of the Maritimes, Kings County's shoreline was home to a productive shipbuilding industry during the 19th century.

Wolfville houses the highly ranked Acadia University. Cape Blomidon and the North Mountain preside over the Annapolis Valley, whereas the South Mountain and interior forests to the southern part of the county support a variety of lakes and recreational cottaging areas.

The first inhabitants of the coast, valley and interior of Kings County were the Mi'kmaq. Archaeological evidence from sites in the area indicate Mi'kmaq habitation dates back thousands of years. The Mi'kmaq were a semi-nomadic people who followed seasonal food sources. Their lives would be forever changed with the arrival of the Europeans.

The colonization of "Les Mines" and Grand Pre began in the 1680s when a few families relocated from French settlement at Port Royal. These "Acadians" settlers were named after the French name for the land "Acadie" meaning "land of plenty". These farmers were accustomed to farming on dyked lands, and did so here as well. This took place on the normally salty but fertile marshes that were found on the banks of the Minas Basin, through the use of dykes and aboiteaux that allowed the fresh water entry but kept out the salt water tide. The Acadians farmers prospered in Kings County, and lived harmoniously with the Mi'kmaq. The Acadians and Mi'kmaq fought numerous battles against the British at Grand Pre:Raid on Grand Pre, Battle of Grand Pre, and the Siege of Grand Pre.

After the final defeat of and expulsion of the Acadians, British control of the land was secured by repopulating the former French lands with settlers from New England. Between 1760 and 1768 some 8000 New Englanders came to "plant" a new colony. Kings County comprised three agricultural townships: Horton, Cornwallis, and Aylesford. The legacy of the New England Planters is still a tangible part of the life in Kings County, and had an important influence on Nova Scotian ideas on democratic government, freedom of religion and equality of education. 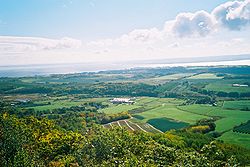 Eastern Kings County from the Lookoff

The Planters were followed in the 1780s by further settlers from the United Empire Loyalists as well as significant numbers of Irish immigrants. The roots of Black Heritage in Kings County began almost 250 years ago when the New England Planters were accompanied by slaves and freed Blacks to settle in Horton and Cornwallis Townships. This initial African population would swell with larger migrations following the American Revolution and especially the War of 1812. Further waves of immigration followed in the following two centuries increasing and adding to the population and diversity of Kings County.

The County's agricultural industry blossomed in the 19th century, especially after the arrival of the Dominion Atlantic Railway which led to a major expansion of exports, especially the apple industry. After the loss of the British export market for apples in World War II, Kings County farmers diversified into other crops and livestock. Agriculture remains a major industry as the county has some of the best farmland in Nova Scotia, but farmland now faces pressure from suburban development around valley towns. The county also faces serious pollution problems in its major water artery, the Cornwallis River.

Kings County was a major wooden shipbuilding area in the 19th Century, including a four-masted barque built in Kingsport named Kings County which was one of the largest ever built in Canada. Today a number of light industrial factories are located in Coldbrook and Waterville.

The county's history is preserved and interpreted at the Kings County Museum in Kentville and a number of Kings County towns have museums related to their specific stories such as the Wolfville Historical Society and the Apple Capital Museum in Berwick.

Indian Reserves in Kings County include Cambridge and Glooscap.

Highways and numbered routes that run through the county, including external routes that start or finish at the county limits:[4]