Chester (2006 pop.: 2,292) is an incorporated Canadian village located in and part of Nova Scotia's Chester Municipal District in the southeastern part of Lunenburg County.

Chester was officially founded in 1759 during the French and Indian War. It was the Shoreham grant, although French fishermen had already built a few houses on the site. The first permanent European-descended settlers were a group from Massachusetts who came to the area in 1761.

During the American Revolution, the village avoided a raid by American Privateers through the "rouge ruse" wherein the townswomen, young and old, garbed in cloaks with their red lining worn outwards marched in an early morning of 30 June 1782 to successfully convince American Privateers lying offshore to find another place to pillage. The following day the privateers successfully executed the Raid on Lunenburg, Nova Scotia (1782).

HMS Hogue, which trapped the Young Teazer before the ship exploded

During the War of 1812, the American Privateer Young Teazer was trapped off the shores of Chester by the HMS Hogue (1811). To avoid capture, a crew member of the Young Teazer destroyed his own ship, killing most of the crew.[1]

Chester is one of the wealthiest communities in the province as a result of being a vacation and resort destination, with many seasonal and year-round estates and mansions. The nearby waters of Mahone Bay and its numerous islands are well known for yachting and have made Chester into a cruising destination. A Provincial ferry from the village provides a schedule of daily trips to Big Tancook Island and Little Tancook Island.

Chester was the site of a controversial proposal to change status of the village. A committee had been formed in hopes of changing the status of Chester by incorporating as a town, thereby leaving the Chester Municipal District. Many residents of the village under the banner "Citizens for Fairness" successfully fought the motion on the principle that the majority of citizens, by ballot, should decide such a fundamental change. Some also saw the possibility of higher taxes, costs for a town hall, a mayor, and water and sewage services as reasons to not incorporate. They won the right to a plebiscite in the fall of 2002 from the Nova Scotia Legislature. The motion was defeated in a public plebiscite on February 22, 2003. 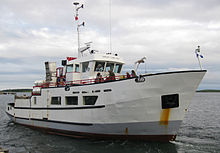 The passenger ferry MV William G Ernst, departing the dock at Chester bound for Big Tancook Island and Little Tancook Island. The ferry is operated by the provincial Department of Transportation and Infrastructure Renewal.

The village is situated on the Chester Peninsula, which extends into Mahone Bay.

Chester has an elementary school, Chester District School (grades Primary–5) and a middle school, Chester Area Middle School or CAMS as it is known (grades 6–9). Forrest Heights Community School brings together students from New Ross and Chester for grades 10–12.

The village is home to the Chester Playhouse one of the best-known community theaters on Nova Scotia's South Shore. Chester is well known for its annual summer sailing regatta, Chester Race Week, where keelboats from all over the eastern coast of North America compete during the second week of August. In the last weekend of July there is the annual Chester Garden Show and the House and Garden Tour along with harbour tours. Also that weekend is the famous Bonnie Lea Lobster benefit. Winter is a time for events including Sing! Choirs" in December and February's "Coldest Day" variety fundraiser. There are a number of public boat launch sites around Mahone Bay. The waters are fine for kyaking and sailing. For walkers and cyclists there is also the Chester Connector which is a municipal operated section of the previous rail line and which is shared with motorized recreational vehicles.

Scenes for several films, miniseries, movies of the week, and television shows have been shot in and around Chester: