The Milwaukee School of Engineering (MSOE) is a private university located in downtown Milwaukee, Wisconsin. MSOE is best known for its applications-oriented curriculum, close association with business and industry, and extremely high placement rate (98%). The university has an enrollment of more than 2,600 undergraduate and graduate students as of fall 2010.

For 2010, MSOE was again among U.S. News & World Report's "Best Colleges and Universities" in the country,[3] ranking 9th Best Undergraduate Colleges in the Midwest. Also, MSOE ranked 10th in the Best Undergraduate Engineering Programs category among colleges whose highest degree is a master's,.[4] MSOE is also recognized on the "Best in the Midwest" listing by Princeton Review.[5] In 2010, MSOE was named one of the best colleges and universities in the Midwest by Forbes on their list of the 152 institutions it profiles in its "Best in the Midwest" section on its website feature 2011 Best Colleges: Region by Region. [6] 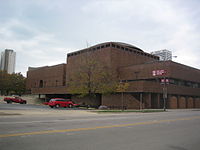 The curricula at MSOE are centered around engineering, engineering technology, nursing, computers, business, architectural engineering, and construction management. MSOE's primary focus is on undergraduate education, however, they do offer nine master's programs. As of 2010-2011, MSOE has 130 full-time faculty members, 75% of whom hold a doctoral degree. Professors teach all courses; teaching assistants are not used. The student to faculty ratio is 14:1.[2] In 1995, MSOE became one of the first U.S. universities to offer a four-year graduation guarantee, promising that an on-track student may always enroll in all the courses on his or her curriculum track.[9]

MSOE has study-abroad exchange agreements with three universities, the Fachhochschule Lübeck[10] in Germany, the Czech Technical University[11] (CTU) in Prague, Czech Republic and Manipal Academy of Higher Education, in India. At the foreign universities, all courses are taught in English. The Lübeck program is a junior year option for students majoring in electrical engineering, international business, or mechanical engineering. Participants on both sides of the exchange receive degrees from both universities. The CTU program is open to various majors and most notably offers a junior-year February through June exchange option to students in architectural engineering or construction management.

MSOE has more laboratories than classrooms.[13] The Allen Bradley Hall of Science and the Fred Loock Engineering Center house the mechanical and electrical engineering departments and the School of Nursing.

In 1980, MSOE's newly constructed Walter Schroeder Library was dedicated by former U.S. President Gerald Ford.[14] In addition to the library, the building houses numerous classrooms plus faculty and administrative offices.

In 1987, MSOE acquired the building that would be dedicated as the Student Life and Campus Center in 1991. It was built in the 1940s and once housed offices and the bottling plant of Blatz Brewery.[7] It now houses student service offices such as Admission, Fincnacial Aid, Registrar, Placement, Student Life, etc. as well as biomolecular engineering laboratories and faculty offices and Civil and Architectural Engineering and Construction Management Department labs, classrooms and faculty offices.

Rosenberg Hall, home to MSOE's Rader School of Business was dedicated in 2003. Funds for the project were provided by alumnus Kenneth Rosenberg and his wife Doris. The hall contains classrooms, labs and faculty offices in addition to the Milwaukee U.S. Export Assistance Center.

In 2004, MSOE dedicated the Kern Center, a 210,000-square-foot (20,000 m2) recreation, athletic, health and wellness facility. It is the first such facility for MSOE, which competes in NCAA Division III athletics. The center exemplifies MSOE's philosophy of a well-rounded university experience.[16]

In 2006, MSOE acquired the former Federal Reserve Bank of Chicago, located at 1000 N. Broadway and renovated it for use as The Grohmann Museum to house the Man at Work: The Eckhart G. Grohmann Collection as well as faculty offices.[17]

MSOE also has a wide variety of club and intramural sports,[18] including a dance team, and a stunt team.

The student-run Ultimate Frisbee team competes in USA Ultimate sponsored intercollegiate tournaments throughout the year. The team was founded in 2007, and remains very active to this day. MSOE is highly competitive in the Lake Superior DIII conference.

In 2004, MSOE's 210,000-square-foot (20,000 m2) Kern Center was completed, adding a hockey arena, basketball arena, fitness center, running track, and field house to its downtown campus. MSOE's Kern Center houses many of the sports teams' facilities, along with recreational areas for students and the Counseling Services, Health Services and the Servant-Leadership Office.