Ripon College is a liberal arts college in Ripon, Wisconsin, USA. It offers small class sizes and intensive mentoring to students. Ripon has a chapter of Phi Beta Kappa--one of the nation's most prestigious honor societies. Alumni have high rates of success in the workforce as well as acceptance to graduate and professional schools. 96% of graduates are employed or in professional school six months after graduation, and the acceptance rate to medical school is twice the national average--80%.[2] The school is also distinctive for its high levels of volunteerism and community service, which earned the institution a place on the President’s Higher Education Community Service Honor Roll for 2009.[3] In 2009, Forbes ranked Ripon 100th on the list of America's 600 best colleges.[4] The school earned an award from The Chronicle of Higher Education as being one of the "Great Colleges to Work For" in the nation, an award given to institutions that are well-managed and where faculty and staff being enthusiastic about their jobs.[5] As of 2010, Ripon College's student body stood at around 1000, the majority of whom live on campus.

It was founded in 1851, but its first class of students did not enroll until 1853. Ripon's first class, four women, graduated in June, 1867. In 1868 formal ties with Presbyterian and Congregational churches were cut, but Ripon remained somewhat religious for much of its history. During the 19th century students were required to attend two church services each Sunday. The first six presidents of Ripon College had clerical backgrounds, as does the current president. The college recognized social and academic Greek letter societies in 1924. The Ripon Chapter of Phi Beta Kappa was started by Dr. Clark Kuebler, who served as president from 1944-1955. The National Forensic League, which is still located in Ripon, Wisconsin, was founded at the college in 1925.

Students choose from 32 majors, ranging from the arts to the social sciences to the hard sciences to pre-professional programs.[6] Ripon is a member of the Associated Colleges of the Midwest (ACM), a grouping of private liberal arts schools that share expertise and collaborate on off-campus study programs. Internationally renowned economist Alfred E. Kahn served as Chairman of the Department of Economics for several years.

The college's Rodman Center for the Arts houses the Departments of Art, Music, and Theater. The Art Department manages two gallery spaces, one of which is dedicated to student work and the other to art more broadly. Student work is also shown across campus. Two art works of note in the permanent collection of the college are life-size portraits by Anthony van Dyck of Princess Amalia of the House of Orange and Sir Roger Townshend. The Classics department manages a collection of classical Greek and Roman artifacts, many of which are displayed in the campus library. A sculpture garden is located adjacent to the building. Musical groups on campus include an orchestra, wind band, jazz ensemble, choral group, and drumline.[7]

Ripon is offering new freshmen in fall 2009 the option of receiving a free Trek 820 mountain bike, helmet, and U-lock if they pledge not to bring a car to campus for the entire year. The "velorution" bike program aims to encourage environmentally-friendly transportation, cut down on traffic, encourage athleticism, and limit the amount of necessary student parking lots in the rural campus.[8] For the 2011 school year, the College disbanded the program after funding for the original project expired.

The college has seven residential dormitories with several sororities, including Alpha Delta Pi, Alpha Chi Omega and the local sorority, Delta Psi Delta, which recently changed to national sorority Kappa Delta. The college has four all-male fraternities including chapters of Sigma Chi, Theta Chi, Phi Delta Theta, and a local fraternity, Phi Kappa Pi, (named Merriman for the college's founding president). Ripon College also has one local co-ed fraternity, Theta Sigma Tau, founded in 1910, the oldest local fraternity on campus. It became co-ed in 1980 after severing ties with Sigma Nu fraternity. All five of the fraternities live in dormitories on campus, following the recent removal of Phi Kappa Pi from Merriman Houuse. Phi Kappa Pi was relocated to the Quad living area, with the other 3 fraternities, after the board of Trustees determined that all students (unless exempted) should reside in residence halls.[9]

As a residential campus, most students take advantage of the campus dining service on a daily basis. The main dining hall includes a wide-range of options at each meal, including traditional American fare, foreign cuisines, and vegetarian / vegan options. A coffee shop on campus brews Starbucks coffee and makes specialty drinks to order. The Ripon Pub is another dining option, which serves snacks, sandwiches, and fast food along with bottled beverages.[10]

The college community includes students of diverse backgrounds. People of color compose 10% of the student population.[11] A McNair Scholars program to support first generation college students and African American, Native American, and Hispanic students who wish to attend graduate school is on campus.[12] An office of Multicultural and International Student Affairs strives to meet the needs of students of color, international students, and gay and lesbian students through mentoring and programming.[13] Student groups that focus on the experiences of racially diverse, culturally diverse, and LGBT students are also active on campus.[14]

Ripon College is recognized by the National Register of Historic Places for the history of its buildings with a district called the Ripon College Historic District. 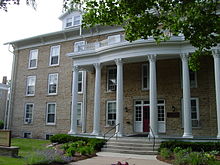