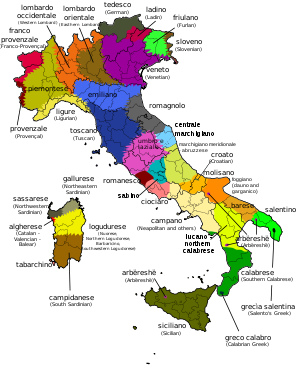 Languages and dialects of Italy

Dialects of Italian (not to be confused with the Languages of Italy) are regional varieties of the Italian language, more commonly and more accurately referred to as Regional Italian. The dialects have features, most notably phonological and lexical, percolating from the underlying substrate languages. Tuscan and Central Italian are in some respects not distant from Italian in their linguistic features, due to Italian's history as derived from a somewhat polished form of Florentine. Nevertheless, the traditional speech of Tuscany is rightly viewed as part of the collection of dialects of Italy. Several of the "dialects of Italy" should be considered distinct languages in their own right, and are assigned to separate branches on the Romance language family tree by Ethnologue and other academic works.

Due to the Italian Peninsula's history of fragmentation and colonization by foreign powers (especially France, Spain and Austria-Hungary) between the fall of the Western Roman Empire and unification in 1861, there was considerable linguistic diversification.

During this period, most locals used the colonial language, rather than the local vernacular, to conduct official business. As a result, a formal grammar structure rarely developed.[clarification needed] In addition, while literate citizens would make notes in the vernacular, Latin was often used for actual publications.[citation needed]

The synthesis of a unified Italian language from the various dialects was the main goal of Alessandro Manzoni, who advocated building a national language derived mainly from the vernacular of Florence, which had gained prestige since Dante Alighieri and Niccolò Machiavelli used it to publish their major works, the Divina Commedia and The Prince (respectively), during the Italian Renaissance.

Various dialects remained the common language of the populace until the 1950s, when, with progressive increases in literacy, standard Italian became gradually accepted as the national language. Until World War II, many people who could not afford schooling or who simply had no use for a national language continued to use their own dialects in their daily lives.[citation needed]

The solution to the so-called language question that had also interested Manzoni came to the nation as a whole in the second half of the 20th century through television. The TV's widespread adoption as a popular household appliance in Italy was the main factor in helping all Italians learn the common national language regardless of class or education level. At roughly the same time, many southerners moved to the north to find jobs. The powerful trade unions successfully campaigned against the use of dialects to maintain unity among the workers. This allowed the southerners, whose "dialects" were not mutually intelligible with the northerners', to assimilate by using Standard Italian. The large number of mixed marriages, especially in large industrial cities such as Milan and Turin, resulted in a generation that could speak only Standard Italian, and usually only partly understand the "dialects" of their parents.

As a result of these phenomena, dialects in Italy remain in use mostly where less immigration occurred; that is, in the South, North-Eastern Italy, in rural areas (where there has been less ethnic blending and influence from trade unions), and among older speakers. Being unable to speak Standard Italian still carries a stigma as it presents a barrier to writing official documents, performing business, or carrying out any kind of legal transaction (all of which use Standard Italian as the dominant language). Even strongly pro-dialect political forces such as the Northern League rarely resort to anything else than Standard Italian to write or speak publicly.[dubious – discuss][citation needed]

Also, the use of dialect remains prominent only among less literate classes[citation needed], the older folks who have resided in the same community since birth, and those living in small towns and villages where there is a much closer community with little interaction with the bigger cities. In no case, however, can the use of local dialects substitute Standard Italian in official transactions, documents, legal matters or else, as stated above.

Use of dialects in literature is not inconsiderable. The plays of Carlo Goldoni in Venetian are notable example. In music, the Neapolitan dialect is the basis of Canzone Napoletana. The various dialects of Italy are also spoken in parts of the world with significant Italian immigrant populations, such as those cited above. Single words or very brief sentences from some more commonly heard dialects, such as Neapolitan or Sicilian, or even Roman or Milanese, are often used all over Italy even in regions far from their places of origin, having been spread by television personalities or movies.

Primarily within North American Italian diaspora communities, Italian dialects that have nearly died out in Italy have been preserved in several major cities across Canada and the United States. This is due in large part to older-generation immigrants, often with low levels of education, having left Italy during or before World War II and maintaining little contact with Italy or with Standard Italian. A significant number of endangered dialects have survived, they've been passed on generationally to varying degrees, and have kept innumerable archaisms as well as have adopted linguistic features and lexical borrowings from American English, Canadian English, Canadian French, and Latin American Spanish, respective to the mileau of the individual community in question.

Similar holds true to much smaller degrees in Middle Eastern-Italian communities, namely those of Egypt and Lebanon, as well as South American-Italian diasporas in Argentina and Brazil. Italian diasporas within Europe tend to maintain much stronger ties with Italy and have easier access to Italian television as well, which almost exclusively broadcasts in the standard language.

Italian dialects and dialects of Italy

For historical, cultural and political reasons, most "Italian dialects" have not yet been given the status of an official language, with the Italian legislation recognizing only Franco-Provençal, Friulan, Ladin, Occitan, Catalan, and Sardinian as proper languages.[1]

The difference, and confusion, between "dialects of Italy" and "Italian dialects" is exemplified by the following. The Venetian language, a language of Italy, has a very different grammar from Italian. In Venetian, "we are arriving" would be translated "sémo drio rivàr", which is quite distinct from the Italian "stiamo arrivando". In Venetian Italian (inflessione veneziana, italiano regionale del Veneto), the statement would be "stémo rivando". The same holds for many of the "dialects" of Italy, being very different in grammar, syntax and vocabulary from and unintelligible with standard Italian and between each other. Despite this, these are commonly thought of as dialects, derivations of standard Italian.

All the dialects of Italy exhibit internal variety, especially the dialects of the South-Central, where the fragmentation into different states was more pronounced and where there was montane isolation. An example is Sicilian, where at least three different and non-mutually intelligible linguistic groups are to be found (including Western and Eastern Sicilian), further divisible into six varieties within which there are differences in pronunciation, grammar and lexicon between one village and another (especially in Western Sicilian). Yet the several varieties spoken in Sicily are all conventionally referred to as Sicilian.

Malta's close ties with Italy meant that Maltese played a role similar to the other Italian dialects,[2] and under Fascist Italy it was simply considered another dialect, even though it is based on Western Arabic heavily interspersed with Sicilian vocabulary.[3]

Regional variants of the Italian language influenced by regional languages: