Maikel Modhushudôn Dôtto (help·info)) 25 January 1824 – 29 June 1873) was a popular 19th century Bengali poet and dramatist.[1] He was born in Sagardari (Bengali: সাগরদাঁড়ি), on the bank of Kopotaksho [কপোতাক্ষ] River, a village in Keshobpur Upozila, Jessore District, East Bengal (now in Bangladesh). His father was Rajnarayan Dutt, an eminent lawyer, and his mother was Jahnabi Devi. He was a pioneer of Bengali drama. His famous work Meghnad Bodh Kavya (Bengali: মেঘনাদবধ কাব্য), is a tragic epic. It consists of nine cantos and is quite exceptional in Bengali literature both in terms of style and content. He also wrote poems about the sorrows and afflictions of love as spoken by women.

From an early age, Madhusudan desired to be an Englishman in form and manner. Born to a Hindu landed gentry family, he converted to Christianity to the ire of his family and adopted the first name, Michael. However, he was to regret his desire for England and the Occident in later life when he talked ardently of his homeland as is seen in his poems and sonnets from this period.

Madhusudan is widely considered to be one of the greatest poets in Bengali literature and the father of Bangla sonnet. He pioneered what came to be called amitrakshar chhanda (blank verse). Dutt died in Kolkata, India on 29 June 1873.[2]

His childhood education started in a village named Shekpura, at an old mosque, where he went to learn Persian. He was an exceptionally talented student. Ever since his childhood, young Madhusudan was recognized by his teachers and professors as being a precocious child with a gift of literary expression. He was very imaginative from his boyhood. Early exposure to English education and European literature at home and in Kolkata made him desire to emulate the proverbially stiff upper-lip Englishman in taste, manners and intellect. One of the early impressions were that of his teacher, Capt. D.L.Richardson at Hindu College. In this respect, he was an early Macaulayite without even knowing it. He dreamt of achieving great fame the moment he landed abroad. His adolescence, coupled with the spirit of intellectual enquiry convinced him that he was born on the wrong side of the planet, and that conservative Hindu society in early nineteenth century Bengal (and by extension Indian society) had not yet developed the spirit of rationalistic enquiry and appreciation of greater intellectual sophistry to appreciate his myriad talents. He espoused the view that free thinking and post Enlightenment West would be more receptive to his intellectual acumen and creative genius. In this, perhaps he forgot the colour of his skin, as he was to realize later on in life, much to his consternation and disgust. He composed his early works—poetry and drama—almost entirely in English. Plays like Sormistha, Ratnavali and translations like Neel Durpan and poems like Captive Ladie which was written on the mother of his close friend Sri Bhudev Mukhopadhyay, indicate a high level of intellectual sophistication.[3][4][5]

In His Own Words

Madhusudan embraced Christianity at the church of Fort William in spite of the objections of his parents and relatives on February 9, 1843. Later, he escaped to Madras to escape persecution. He describes the day as:

On the eve of his departure to England:

(Translated from the original Bengali by the poet.)

Dutt was particularly inspired by both the life and work of the English Romantic poet Lord Byron. The life of Dutt closely parallels the life of Lord Byron in many respects. Like Byron, Dutt was a spirited bohemian and like Byron, Dutt was a Romantic, albeit being born on the other side of the world, and as a recipient subject of the British imperialist enterprise. However, the lives of the two can be summed up in one word: audacity. These two mighty poets at once remind us of the saying of Georges Danton, the French revolutionist: "L'audace, encore l'audace, toujours l'audace!"

If Lord Byron won over the British literary establishment with Childe Harold's Pilgrimage, a comparative analogy may be made for Dutt's heroic epic Meghnadh Badh Kabya, although the journey was far from smooth. However, with its publication, the Indian poet distinguished himself as a serious composer of an entirely new genre of heroic poetry, that was Homeric and Dantesque in technique and style, and yet so fundamentally Indian in theme. To cite the poet himself: "I awoke one morning and found myself famous." Nevertheless, it took a few years for this epic to win recognition all over the country.

Madhusudan was a gifted linguist and polyglot. Besides Indian languages like Bengali, Sanskrit and Tamil, he was well versed in classical languages like Greek and Latin. He also had a fluent understanding of modern European languages like Italian and French and could read and write the last two with perfect grace and ease.[citation needed]

Work with the Sonnet

He dedicated his first sonnet to his friend Rajnarayan Basu, along with a letter which in which he wrote:

"What say you to this, my good friend? In my humble opinion, if cultivated by men of genius, our sonnet in time would rival the Italian."

When Madhusudan later stayed in Versailles, France, the sixth centenary of the Italian poet Dante Alighieri was being celebrated all over Europe. He composed a poem in memory of the immortal poet and translated it into French and Italian and sent it to the court of the king of Italy. Victor Emmanuel II, the then monarch, was enamored of the poem and wrote back to the poet:

"It will be a ring which will connect the Orient with the Occident."

Sharmistha (spelt as Sermista in English) was Madhusudan's first attempt at blank verse in Bengali literature.

Kaliprasanna Singha organised a felicitation ceremony to Madhusudan to mark the introduction of blank verse in Bengali poetry.

"As long as the Bengali race and Bengali literature would exist, the sweet lyre of Madhusudan would never cease playing."

"Ordinarily, reading of poetry causes a soporific effect, but the intoxicating vigour of Madhusudan's poems makes even a sick man sit up on his bed."

In his The Autobiography of an Unknown Indian, Nirad C. Chaudhuri has remarked that during his childhood days in Kishoreganj, a common standard for testing the level of erudition in the Bengali language during family gatherings (like for example, testing the vocabulary stock of a would-be bridegroom as a way of teasing him) was the ability to pronounce and recite the poetry of Dutt, without the trace of an accent.

The street where M Dutt used to live in Versailles, France

In his trip to Versailles, France during the 1860s, Madhusudan had to suffer the ignominy of penury and destitution. His friends back home, who had inspired him to cross the ocean in search of recognition, started ignoring him altogether. Perhaps his choice of a lavish lifestyle, coupled with a big ego that was openly hostile to native tradition, was partly to blame for his financial ruin. Except for a very few well-wishers, he had to remain satisfied with many fair-weather friends. It may be argued, not without some obvious irony that during those days, his life oscillated, as it were, between the Scylla of stark poverty and the Charybdis of innumerable loans. He was head over heels in debt. As he was not in a position to clear off his debts, he was very often threatened by imprisonment. Dutt was able to return home only due to the munificent generosity of Ishwar Chandra Vidyasagar. For this, Dutt was to regard Vidyasagar as Dayar Sagar (meaning the ocean of kindness) for as long as he lived. Madhusudan had cut off all connections with his parents, relatives and at times even with his closest friends, who more often than not were wont to regard him as an iconoclast and an outcast. It was during the course of his sojourn in Europe that Madhusudan then realized his true identity. Perhaps for the first time in his life, he became aware of the colour of his skin and his native language. What he wrote to his friend Gour Bysack from France neatly sums up his eternal dilemma:

One of the reasons for his decision to leave the religion of his family was his refusal to enter into an arranged marriage that his father had decided for him. He had no respect for that tradition and wanted to break free from the confines of caste-based endogamous marriage. His knowledge of the European tradition convinced him of the superiority of marriages made by mutual consent (or love marriages).

Madhusudan married twice. When he was in Madras, he married Rebecca Mactavys. Through Rebecca, he had four children. Madhusudan wrote to Gour in December 1855:

Michael returned from Madras to Calcutta in February 1856, after his father's death. Michael married a woman named Henrietta Sophia White. His second marriage was to last till the end of his life. From his second marriage, he had one son Napoleon and one daughter Sharmistha.

The tennis player Leander Paes is the son of his great granddaughter. 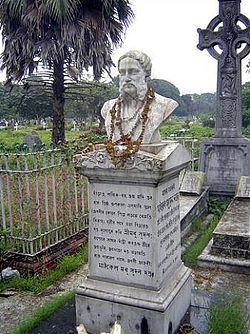 Madhusudan died in Calcutta General Hospital on 27 June 1873 three days after death of Henrietta. Just three days prior to his death, Madhusudan recited a passage from Shakespeare's Macbeth to his dear friend Gour, to express his deepest conviction of life:

Gour responded with a passage from Longfellow:

After Dutt's death, he was not paid a proper tribute for fifteen years.[7] The belated tribute took the form of a shabby makeshift tomb. Madhusudan's life was a mixture of joy and sorrow. Although it could be argued that the loss of self-control was largely responsible for his pitiable fate, his over-flowing poetic originality for joy was to become forever immortalized in his oeuvre.

His epitaph, a verse of his own, reads:

In the words of Bankim Chandra Chatterjee, the father of modern Bengali prose, the poet of Meghnad Badh Kabya thus:

In word of Tagore:

In Byron's dramatic poem Manfred what the Abbot of St. Maurice spoke of Manfred can equally be applied to the life of Madhusudan:

In the words of Sri Aurobindo: