Valmiki (Sanskrit: वाल्मीकि, vālmīki) (during Lord Rama's time)[1] is celebrated as the poet harbinger in Sanskrit literature. He is the author of the epic Ramayana, based on the attribution in the text of the epic itself.[2] He is revered as the Adi Kavi, which means First Poet, for he discovered the first śloka i.e. first verse, which set the base and defined the form to Sanskrit poetry. The Yoga Vasistha is attributed to him. The religious movement Valmikism is based on Valmiki's teachings as presented in the Ramayana and the Yoga Vasistha.

At least by the 1st century AD, Valmiki's reputation as the father of Sanskrit classical poetry seems to have been legendary. Ashvagosha writes in the Buddhacarita:

"The voice of Valmiki uttered poetry which the great seer Chyavana could not compose."

This particular verse has been speculated to indicate a familial relationship between Valmiki and Chyavana, as implied by the previous and subsequent verses.[3][4]

Valmiki was the son of Brahmin Sumali. His birth name was Agni Sharma.When everyone left to travel south Brahmin Sumali took his son and wife and moved near the bank of Betwa River(Northern India).[5] The Uttara Khanda tells the story of Valmiki's early life, as an unnamed highway robber who used to rob people before killing them. Other versions name him Valya Koli.[6][7][8] Robbing people who passed by was the only source of money for him.[5]

How he became Valmiki

One day Rishi Atri (Narada Muni)[9] was passing by that way when he ran into Agni Sharma, who insisted them to give everything they own. From their clothing to the shoes they were wearing. Rishi Atri asked Agni Sharma why he was commiting this sin. Agni Sharma answered that this was the only way to provide food for his family. Rishi Atri asked him if his family was part of this sin that he was commiting and he told him to go ask his family that same question. Agni Sharma made Rishi Atri stay in that same spot until he was back. When Agni Sharma asked his parents if they were with him on the sin that he was doing, they replied that it was his job to take care of them. And that he was only responsible for his own sins. His wife also said the same thing. Agni Sharma then returned to Rishi Atri and fell to his feet. He told him that he alone was responsible for the sins and asked him to help him get rid of the sins he had commited.[5] Rishi Atri told him to repeat Lord Ramas name and that would assist him. Rishi Atri left for a pilgrimage and when he returned back he found an anthill growing around Agni Sharama. He was shocked and helped him out of the anthill. He then named him Valmiki (meaning 'anthill' in Sanskrit). [9]

Writer of the Ramayana 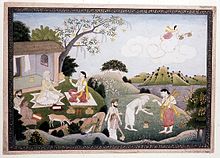 The youthful sage Narada at the white-bearded Valmiki's hermitage 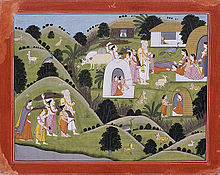 The Rāmāyaṇa, originally written by Valmiki, consists of 24,000 verses[10] in seven cantos (some say six i.e. excluding the Uttara Ramayana) (kāṇḍas). The Ramayana tells the story of a prince, Rama of Ayodhya, whose wife Sita is abducted by the demon (Rākshasa) king of Lanka, Rāvana. The Valmiki Ramayana is dated variously from 500 BC to 100 BC, or about co-eval with early versions of the Mahabhārata.[11] As with many traditional epics, it has gone through a long process of interpolations and redactions, making it impossible to date accurately.

Notwithstanding the aforesaid, it is pertinent to note that Valmiki is also quoted to be the contemporary of Rama. Rama met Valmiki during his period of exile and had interacted with him. Valmiki had Sita in his hermitage where Kusa and Lava were born to Sita. Valmiki taught Ramayana to Kusa and Lava, who later sang the divine story in Ayodhya during the Aswamedha yaga congregation, to the pleasure of the audience, whereupon, King Rama summoned them to his royal palace. Kusa and Lava sang the story of Rama there, and Rama confirmed that whatever had been sung by these two children was entirely true.

With this backdrop, it needs review to establish the period of Valmiki, likely to date back to thousands of years, as Krishna incarnation followed Rama's.

Valmiki was going to the river Ganga for his daily ablutions. A disciple by the name Bharadwaja was carrying his clothes. On the way, they came across the Tamasa Stream. Looking at the stream, Valmiki said to his disciple, "Look, how clear is this water, like the mind of a good man! I will bathe here today." When he was looking for a suitable place to step into the stream, he heard the sweet chirping of birds. Looking up, he saw two birds flying together. Valmiki felt very pleased on seeing the happy birds. Suddenly, one of the birds fell down, hit by an arrow; it was the male bird. Seeing the wounded one, its mate screamed in agony. Valmiki's heart melted at this pitiful sight. He looked around to find out who had shot the bird. He saw a hunter with a bow and arrows, nearby. Valmiki became very angry. His lips opened and he uttered the following words:

His first disciples to whom he taught the Ramayana were Kusa and Lava, the sons of Rama.