Music tourism is the act of visiting a city or town, in order to see a gig or festival. With the presence of the tourist, money is spent and the local economy benefits. This sort of tourism is particularly important to small villages such as Glastonbury, as well as large cities like Glasgow.

Festival and music tourism is defined as travel for the main purpose of attending cultural and/or music festivals. Religious pilgrimages and sporting events are excluded from the definition.

Music tourism is one of the newest typology of tourism. Music tourism can be categorised under pleasure tourism, as it involves travel of people to watch a music concert. Rock music and hip-hop music are the two main genre of music which create music tourism.

The fairly recent Jam band phenomenon is a contemporary example that encourages music tourism. Music festivals such as Bonnaroo are visited by many tourists annually.[1]

The Artful Music Tourist Board is a movement, started to celebrate this, in 2003 by musicians and their friends at The Paradise Bar (now Royal Albert pub) in London, UK. The collective has created an alternative destination and more, since. The foundation is music tourism.

Due to the diversity of festivals worldwide, both in theme and content, as well as location, it is difficult to generalise about consumer profile. However, broadly speaking, the pre-family and post-family groups represent the key consumer groups for music and festival tourism. The 18-35 age group is the predominant age group for music festivals, whilst the 45-65 age group is most significant for cultural festivals. 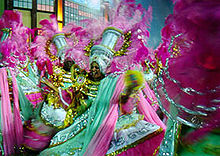 Overall, an estimated 10 million people travel internationally each year for the main purpose of watching or participating in a music or cultural festival.

'The Tourism Innovation Fund seeks out fresh, cutting edge ideas which will put Northern Ireland firmly on the visitors map. Music has a huge appeal to everyone and Northern Ireland has a very strong musical heritage that forms a key part of our unique culture.

'The new app and website, as well as the exhibition at the Oh Yeah centre will not only showcase our existing musical talent but will also ensure visitors have up to date information on local events and festivals.'

As more and more people use their mobile phones to find out information, the free ‘Belfast Music’ iPhone app developed by Filmtrip, allows local music fans and visitors alike to find out not only what’s happening on the scene at the moment, but also to explore the city’s rich musical heritage.

The app features an interactive music tour, narrated by BBC broadcaster Stuart Bailie, and featuring a soundtrack by the likes of David Holmes[disambiguation needed

], Neil Hannon and the Ulster Orchestra, Rudi, The Undertones, Ash, Therapy?; a Hall Of Fame, introducing Belfast’s music legends; up to the minute gig listings and news; and a showcase section, introducing the best in contemporary Belfast music.

'Belfast’s music receives high international praise and our latest generation of musicians are playing a crucial role in revitalising the city. Our city is now lit up throughout the year with a vibrant calendar of events. Every night of the week, venues in the city are busy with local bands, DJs, traditional musicians, orchestras, jazz players and songwriters.

'This is an art form that is defining the new mood of Belfast and these new initiatives aim to profile and promote Belfast’s reputation as the birthplace of exceptional music.'

The greatly expanded Belfast Music Exhibition, at the Oh Yeah Music Centre, takes visitors on a unique journey - from Ruby Murray to Snow Patrol, by way of Stiff Little Fingers, via The Divine Comedy, Ash and The Undertones. This expanded version sheds additional light on DJ culture, jazz and showbands, as well as looking fondly at our legacy for heavy rock and our progress through the Eighties.

The freshly revamped lobby area in Oh Yeah features a specially commissioned film on the life of Terri Hooley, plus an array of musical memories from the public – ‘True Confessions’. A timeline will follow the chart successes of Northern Ireland acts –from 1954 to the present day. Check out the Exhibition page for more details.

Snow Patrol are an alternative rock band from Northern Ireland.

The Belfast Music Tour is a journey through the heart of a great rock n’ roll city, from Them and Van Morrison to Snow Patrol, by way of famous guitar players, punk rock and Hollywood soundtracks. Starting at the refurbished iconic Ulster Hall and home to the Ulster Orchestra, the tour takes in many landmarks associated with the Belfast music story, venues which put the city on the international music map and places that inspired songs, ending with a tour of the Belfast Music Exhibition at Oh Yeah. See the Music Tour page for details.

Finally, music fans heading out in Belfast have now got the latest gigs and music news at their fingertips with the launch of the new BelfastMusic.org website. Right here, potential gig goers will be able to quickly find hundreds of music events across Belfast, from intimate singer-songwriter nights to classical recitals to rock concerts. Produced by Culture Northern Ireland in partnership with Belfast City Council, it features the latest Belfast music events, news, reviews, audio and video.