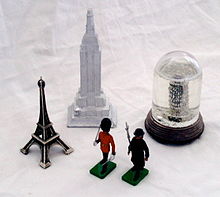 A souvenir (from French, for a remembrance or memory),[1] memento, keepsake or token of remembrance[1] is an object a person acquires for the memories the owner associates with it. The term souvenir brings to mind the mass-produced kitsch that is the main commodity of souvenir and gift shops in many tourist traps around the world. But a souvenir can be any object that can be collected or purchased and transported home by the traveler. The object itself has no real significance other than the psychological connection the possessor has with the object as a symbol of past experience. Without the owner's input, the object's meaning is invisible and cannot be articulated.[2]

The tourism industry designates tourism souvenirs as commemorative merchandise associated with a location, often including geographic information and usually produced in a manner that promotes souvenir collecting. Throughout the world, souvenir trade is an important part of the tourism industry serving a dual role, first to help improve the local economy, and second to allow visitors to take with them a memento of their visit, ultimately to encourage an opportunity for a return visit, or to promote the locale to other tourists as a form of word-of-mouth marketing.[3] Perhaps the most collected souvenirs by tourists are photographs as a medium to document specific events and places for future reference.[2]

Souvenirs as objects include mass-produced merchandise such as clothing: T-shirts and hats; collectables: postcards, refrigerator magnets, miniature figures; household items: mugs, bowls, plates, ashtrays, egg timers, spoons, notepads plus many others. Souvenirs also include non-mass-produced items like folk art, handicrafts and antiques, and non-commercial items such as natural objects, and anything else that a person attaches nostalgic value to and collects among his personal belongings.[4]

Similar to souvenirs, memorabilia (Latin for memorable (things), plural of memorābile) are objects treasured for their memories; however, unlike souvenirs, memorabilia are valued for a connection to an event. Examples include sporting events, historical events, culture and entertainment. Such items include cigarette cards, air sickness bags, publicity photographs, posters, entertainment-related merchandise, movie memorabilia, pins and other, often-licensed, items.

In Japan, souvenirs are known as meibutsu (products associated with a particular region); and omiyage, candies or other edibles to be shared with co-workers. Omiyage sales are big business at Japanese tourist sites.[5]

Travelers may buy souvenirs as gifts for those who did not make the trip.