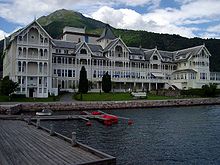 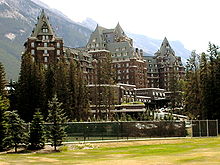 A destination hotel is often characterized by:

Since the 1800s, the traditional concept of a destination hotel has been based upon a venue which is typically remote and has a natural feature as its attraction.[2] For example, the Kviknes Hotel in Norway is a difficult to reach remote location which provides visitors access to the scenic fjord at Balestrand. Historically there were certain built-in amenities such as gourmet cuisine, music recitals and shoreline trails; however, the amenities of modern (post 1980) destination hotels dwarf the scale of these earlier models. Many of the Las Vegas and Caribbean resort hotels have complete shopping malls, conference centers and large entertainment halls on site; thus, the contemporary version of a destination often features large on-site capital investment in activities, although the access to a local natural feature is still retained by many newer destination hotels (e.g. Hotel l'Anjajavy in Madagascar).

There are numerous historic venues which were well known in the 19th century, some of which survive to the present. Examples of these properties include:

There are several distinct types of destination hotels including: