Corey Scott Feldman (born July 16, 1971) is an American film and television actor. He became known during the 1980s, with roles in the Hollywood films Friday the 13th: The Final Chapter, The Goonies, Stand by Me, The Lost Boys, License to Drive, Dream a Little Dream, Gremlins and Teenage Mutant Ninja Turtles. Feldman is also the lead singer for the rock band Truth Movement. 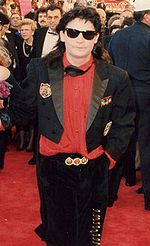 Feldman at the Academy Awards in March 1989

Feldman was born in the Chatsworth district of Los Angeles, California, the second of five children of Sheila (née Goldstein), his childhood manager, and Bob Feldman, a musician who eventually owned his own talent agency aimed at modeling other children's careers after his son's.[1] Feldman was raised Jewish.[2][3] He has an older sister Mindy, a younger sister Brittnie and two younger brothers, Eden and Devin.[4]

Feldman started his career at the age of three, appearing in a McDonald's commercial. In his youth he appeared in over 100 television commercials and on 50 television shows, including "Mork and Mindy", "Eight is Enough", and "One Day at a Time". He was also in Cheers, playing a Little Leaguer coached by Coach Ernie Pantusso.

He debuted in the films Time After Time and Disney's The Fox and the Hound, and then went on to feature in several high-grossing movies (including a fair amount of number-one movies) in a row. These movies included Friday the 13th: The Final Chapter (1984), Gremlins (1984), The Goonies (1985), and Stand By Me (1986), alongside River Phoenix, Wil Wheaton, and Jerry O'Connell.

In 1987, Feldman appeared with Corey Haim in The Lost Boys. This film marked the first on-screen pairing of Feldman and Haim, who became known as "The Two Coreys". The pair went on to star in a string of films including License to Drive (1988) and Dream a Little Dream (1989).

In 1989, Feldman appeared in The 'Burbs opposite Tom Hanks and Carrie Fisher.

Feldman began the 1990s providing the voice of Donatello for the first Teenage Mutant Ninja Turtles live-action film. After a public battle with drugs,[5] Feldman fought to re-establish his life and career by working with youths, starring in several lesser-known films, and branching out with an album of New Jack Swing music, entitled "Love Left". He returned to the big screen with Teenage Mutant Ninja Turtles III where he again did the voice of Donatello, and starred in the Richard Donner/Robert Zemeckis/Joel Silver film Tales From The Crypt Presents: Bordello of Blood, opposite Dennis Miller.

He continued working with his friend Corey Haim on independent films, including a sequel to their last mainstream film together, Dream A Little Dream 2. In 1996, Feldman directed his first and thus far only motion picture, a slapstick comedy called 'Busted' where Haim played a leading role. This would be the last film that they would do as "The Two Coreys".

In the late 1990s, Feldman starred in the CBS series Dweebs and then released his second album, Still Searching for Soul, with his band Corey Feldman's Truth Movement. In 1999, Feldman appeared in New Found Glory's "Hit or Miss" music video as Officer Corey Feldman. In 1999, he made an appearance in the TV show The Crow: Stairway to Heaven.

In 2002, Feldman released a solo album, Former Child Actor, and promoted it with a second US tour. In 2003, he appeared in the first celebrity-driven reality series The Surreal Life on The WB. On the show, he publicly married Susie Sprague.[citation needed] The next year, he made a cameo appearance in the film Dickie Roberts: Former Child Star starring David Spade. He appeared in the Moby music video "We Are All Made Of Stars".

In 2004, Feldman made a cameo appearance in the independent sci-fi comedy Space Daze which was distributed by Troma Entertainment in 2005.

In 2005, Feldman made his stage debut in the positively reviewed off-Broadway play Fatal Attraction, a Greek Tragedy, a parody of the seminal 1987 film Fatal Attraction directed by Timothy Haskell.[citation needed] Feldman played the lead character, named Michael Douglas. Feldman appeared in the theatrical release My Date with Drew and was the voice of "Sprx-77" in the Toon Disney/ABC Family series Super Robot Monkey Team Hyperforce Go!.

In the winter of 2007, Feldman's new film, Terror Inside, was released after the premiere of the A&E show. It was filmed in the Greater Orlando area by Minott Lenders, an independent film company based in Florida.[citation needed]

In January 2008, Feldman, his wife, and Haim started production on the second season of the television show The Two Coreys. Feldman was also Executive Producer for both seasons.

On July 29, 2008, Warner Premiere released Lost Boys: The Tribe, a sequel to the 1987 horror film The Lost Boys, on DVD and Blu-ray. In the film, Feldman reprises his role of vampire hunter Edgar Frog.[8]

He now is the lead singer in the band The Truth Movement.[9]

Summer 2011, Feldman starts shooting for the horror movie Six Degrees of Hell in Saylorsburg, PA. Majority of the film is being shot at the Hotel of Horror haunted attraction. [11]

Feldman met Susie Sprague in a nightclub in January 2002. They married on October 30 that year, on the final episode of the first season of The Surreal Life. The ceremony was co-officiated by a rabbi and by M.C. Hammer, an ordained minister.[3] In October 2009, the couple split after 7 years of marriage. Later that month, Sprague filed for divorce, citing irreconcilable differences. She is seeking full custody of their son, with Feldman having visitation rights. She is also seeking spousal support.[12] Feldman seeks joint custody and wants the court to block Sprague's spousal support demand.[13]

Feldman was awarded the Paws of Fame Award by the Wildlife Way Station for his dedication to animal rights.[14]

In an August 2011 interview, Feldman claimed that Hollywood's biggest secret is paedophilia and that he was a victim of it in the 1980s.[15]

During February 2005 Feldman was subpoenaed to testify against Michael Jackson in his child molestation trial. The singer was accused of molesting a 15-year-old boy who spent time at his Neverland Ranch and is believed to be a cancer survivor who appeared in Martin Bashir's 2003 British documentary Living With Michael Jackson. Feldman said, "I started looking at each piece of information, and with that came this sickening realization that there have been many occurrences in my life and in my relationship to Michael that have created a question of doubt".[16]

Feldman accused Michael Jackson of damaging his childhood by befriending and then abandoning him. The two became close after Feldman found fame as a young star in Gremlins, The Goonies and Stand by Me. Feldman admitted Jackson helped many children by becoming a friend and mentor – but claimed he did more harm than good, by dropping kids when he grew bored. The actor said, "He did real damage in my overall life. I was a 12-year-old boy who was hurt by his family and ignored by people at school. Michael would sit and talk to me for hours and he would listen. Then he would get bored. The biggest thing that Michael's done to children is befriending the ones that are in need and then abandoning them".[17]

When Jackson died, Feldman dedicated a Los Angeles concert with his rock band Truth Movement to the singer. Feldman told the crowd Jackson was watching over the show. "I didn't feel I could pull myself together to do a show tonight," Feldman told People magazine after the show. "It's been really difficult, honestly. I'm all shaken up right now. I had to do a lot of acting, basically, to get through the last 48 hours". Of the events of the week Jackson died, said Feldman, "It was shocking, and I think I'm still in shock, to an extent. I don't think I have fully, completely come to terms with it yet. I have waves and flashes. One moment, I feel fine and I'm myself. Then all of a sudden, it hits me, and I go, 'Wow, he's really gone.' It's very troubling".[18]