The Surreal Life is a reality television series that sets a select group of past-their-prime celebrities and records them as they live together in Glen Campbell's former mansion[2] in the Hollywood Hills for two weeks. The format of the show resembles that of The Real World and Road Rules, in that the cameras not only record the castmates' participation in group activities assigned to them, but also their interpersonal relationships and conflicts. The first two seasons aired on The WB, and subsequent seasons have been shown on VH1. 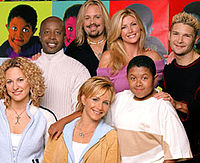 The first season (2003) starred Gabrielle Carteris, MC Hammer, Corey Feldman, Emmanuel Lewis, Jerri Manthey, Mötley Crüe vocalist Vince Neil, and Brande Roderick. Throughout the two-week production, the cast participated in a Survivor-inspired camping trip, a trip to Las Vegas, and a drama-creating Corey Feldman, who got married to his girlfriend in the season finale. Mindy Cohn was scheduled to be a cast member, but dropped out before taping began.[3][4] Robin Givens was also offered a slot on the cast, but declined.[5] 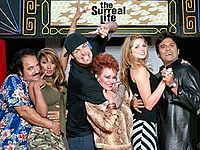 The second season aired in early 2004 starred Traci Bingham, Trishelle Cannatella, Erik Estrada, Tammy Faye Messner, Ron Jeremy, and Vanilla Ice.[6] Some memorable moments involved Ron Jeremy's topless porn-star pool party, Tammy Faye's book signing with members of the gay and transgender community, and a cameo by Gary Coleman. As the cast works at a local retro diner under Coleman's management, Vanilla Ice sticks a banana down his own pants, hoists Coleman above the deep-fryer, and insists on having the former child star say his catchphrase, "What'chu talkin' 'bout, Willis?" in public when Coleman's Strokes co-star Todd Bridges shows up. These acts led the diminutive sitcom star to "fire" Ice and then quit. The season also introduced "Dirty Laundry", the Surreal Life talk show hosted by Sally Jessy Raphael. Raphael focused on Cannatella and made several unflattering remarks about her drinking problem, and in turn, said she was acting like a slut. Other memorable moments included a surprise stop at the Desert Shadows Inn, a nudist resort, from which Tammy Faye fled in tears, and the production of a children's play. Danny Bonaduce was scheduled to be a cast member but dropped out before taping began.[citation needed] 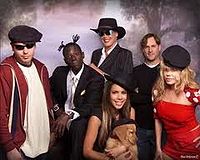 The show's third season began in September 2004 and starred Charo, Dave Coulier, Flavor Flav of Public Enemy, Jordan Knight, Brigitte Nielsen, and Ryan Starr.[7] Memorable moments included Date Night, an agonizing recording session for the group to produce an original song, and Flavor's insistence that he drive the group's RV despite not having a license. Flavor also caused a brief disconnection with the cast, when it was revealed during Dirty Laundry that he had hit the Surreal Life puppy. Throughout the two weeks, Nielsen and Flav began a relationship which would have a dramatic influence on VH-1's programming over the next five years, as it indirectly spawned 14 spinoffs and sequels to date. The romance first continued in Strange Love and snowballed from there, after the success of the Flavor of Love series. 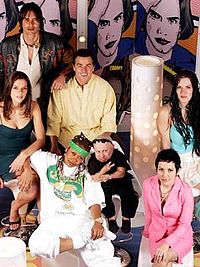 The fourth season (2005) starred Da Brat, Adrianne Curry, Christopher Knight, Chyna, Marcus Schenkenberg, Verne Troyer, and Jane Wiedlin. Among notable moments included conflict between Da Brat and Wiedlin that stemmed from comments made by Da Brat about Wiedlin that were shown during Dirty Laundry, and the strained relationship between Laurer and her now-ex-boyfriend Sean Waltman. More memorable moments included Troyer getting drunk on the first day and urinating[8] in the weight room and Wiedlin getting upset about the group being asked to brand a cow. Like the season prior, another romance-themed spin-off, My Fair Brady was developed around the romantic escapades of Curry and Knight. 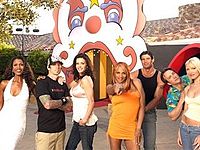 Season five (2005) played up on the show's namesake surreality by having the house decorated with a circus/carnival theme and the cast was given circus-style taglines during the introduction: Caprice Bourret ("See Britain's Most Beautiful Woman"), José Canseco ("Face the Fantastic Strongman"), Sandy "Pepa" Denton ("Meet the Mystical Musician"), Janice Dickinson ("Behold the World's First Supermodel"), Carey Hart ("Witness the Death-Defying Daredevil"), Omarosa Manigault ("Fear the Ultimate Reality Villain") and Bronson Pinchot ("Marvel at the Man from Mypos"). This was enhanced with the introduction of a three-legged dog named Lucky. An ongoing feud between Manigault and Dickinson was a key focus point in the season, which ended with Dickinson leaving the house during the final dinner. 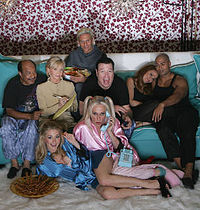 Season six (2006) had a retro motel theme and starred Alexis Arquette, Poison guitarist C. C. DeVille, Steve Harwell, Sherman Hemsley, Maven Huffman, Tawny Kitaen and Andrea Lowell. Florence Henderson ("Dr. Flo") assisted the cast as the house therapist. Throughout the two weeks, the cast shot a music video, produced and broadcast a live news program, booked and hosted their own talk show pilots, and participated in a "battle of the bands" competition. During the talk show episode, Marla Gibbs makes a cameo appearance with Hemsley, and the two recreate their retorts and putdowns as Florence and George from The Jeffersons. Arquette brings the transgender community increased visibility and awareness with her appearance in the series. And, struggling with memory and enunciation problems that grow worse, Kitaen is inexplicably left crawling on the floor of a closet by the final episode.

The Surreal Life is one of VH1's most spun off shows, with a complex web of reality series that have, themselves, had spin-off shows.[9] The first spin-off from The Surreal Life was Strange Love, starring Flavor Flav and Brigitte Nielsen, both of Season 3. It premiered in January, 2005 and ran for 11 episodes. The second spin-off, My Fair Brady, starred Adrianne Curry and Christopher Knight. It ran its first season in 2005, concluding with the couple's engagement. The second season debuted in the spring 2006, concluding with a wedding. The third season premiered on January 20, 2008 and detailed the newlyweds' lives as they prepared to expand their family.

The Surreal Life: Fame Games reunited cast members of the original Surreal Life series in a competition for cash and prizes.

Pepa received her own two shows stemming from her popularity on VH1. She teamed up with her old partner Cheryl "Salt" James for The Salt-N-Pepa Show which showcased the two distinct personalities clash on many issues from their break-up as a group in the 90s to their current reformation. The series spanned two seasons. In 2010, Pepa also received her own show on VH1 that documented her search for her Mr. Right entitled "Let's Talk About Pep".

Strange Love itself had a spin-off show, titled Flavor of Love, which lasted for 3 seasons, ending with Flav's announcement that he had found his one true love. Due to the show's great success, it spawned a successful franchise.

Some notable contestants also managed to receive their own dating show. The first was Flavor of Love's Tiffany Pollard aka New York with I Love New York (2 seasons). Three of her suitors got their own show brothers Kamal "Chance" and Ahmad "Real" Givens starred in Real Chance of Love (2 seasons), and Frank "The Entertainer" Maresca starred in Frank the Entertainer... in a Basement Affair.

Contestants from Flavor of Love, Rock of Love, Real Chance of Love and Rock of Love Bus were offered to participate in Charm School, which lasted 3 seasons, with the premise of bettering themselves and a chance at a cash prize. Contestants from Flavor of Love, Rock of Love, I Love New York, Real Chance of Love, For the Love of Ray J, Rock of Love Bus, Daisy of Love and Megan Wants a Millionaire were allowed to take part in I Love Money, a Survivor elimination-style show held in a Mexican mansion. Four seasons were produced but the 3rd one never aired due to Ryan Jenkins' involvement.

Contestants New York, Real and Chance later starred in additional unscripted shows. New York Goes to Hollywood followed Pollard's attempt at becoming an actress, New York Goes to Work saw her perform various jobs as voted by the viewers on a weekly basis, Real and Chance: The Legend Hunters followed the Givens brothers in their quest to find legendary monsters such as the Big Foot.

Seasons 1, 2 and 5 were released in the US, but have since been discontinued. All six seasons have been released on DVD in Australia by Shock Records.