Christopher Anton Knight (born November 7, 1957) is an American actor best known for playing Peter Brady on the 1970s series, The Brady Bunch. He has since gone on to become a successful businessman and enjoyed a semi-resurgence in the public eye with television appearances in the 2000s. His father, Edward Knight, was also an actor. He is separated from his wife, model and reality television personality Adrianne Curry.

Since the end of his Brady Bunch appearances, Knight's acting career consisted mostly of making guest appearances on other television shows. He also helped create a Brady Bunch computer game and was involved in the IT industry, according to a TV Land documentary about the Brady Bunch.[citation needed]

He reunited with his former Brady costars the 1988 holiday television movie, A Very Brady Christmas.

An interest in science and machines led Knight to a career in the computer industry in 1988. His celebrity status helped him to hone skills in sales and marketing. Entering the industry as an account sales manager at Martec, Inc., he logged the company's first US$1 million sales order within his first eighteen months, quickly becoming Martec's top performer and employee of the year.[citation needed]

In October 1989, Knight became vice president of design system marketing and sales at New Image Industry, moving the company into 3D rendering/imaging technologies. Then in mid 1991, he, and a few other key employees successfully moved the software engineering staff and the 3D technologies into a new privately held company, Visual Software. As co-founder of Visual Software, Knight was an early participant in the consumer 3D graphics market. His efforts led to business success, seeing the company move from $400,000 in annual sales to $4.2 million within 10 months. Visual Software was acquired by Micrografx in January.[citation needed]

In February 1996, he became the vice president of sales at Adesso, a computer keyboard manufacturer. Within his first 4 months sales doubled.[citation needed]

Knight and Paniagua reunited in August 1997 at Integrated Micro Solutions (I.M.S.) which later became IXMICRO. Initially hired as vice president of strategic marketing, Knight was promoted to vice president of marketing four months later. Annual sales went from less than $2 million in early 1997 to $63 million in 1998. Also brought in was Jim Pilgrim, known for engineering related sales in the market, Knight and Pilgrim connected on many projects at IXMICRO.[citation needed]

In late 1998 Knight, Paniagua and an associate, David Smith, formed Eskape Labs. The three had been part of IXMICRO's executive staff, but sensed a shift in the focus of computer technology from personal computers to intelligent devices. With a mission to provide "on wire" digital appliances that easily plug into computers, Eskape has developed a number of first-to-market video devices. The company was purchased by Hauppauge Computer Works in the summer of 2000. Hauppauge is the world's largest manufacturer of computer based TV tuner products and, with Eskape Labs, now has a line of TV tuners that are Macintosh compatible.[citation needed] 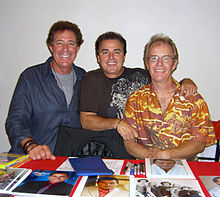 In the 2000s, Knight and his Brady Bunch co-stars made a number of TV appearances together. Above are Barry Williams (left) and Mike Lookinland (right), with Knight at the Big Apple Convention.

On April 17, 1994, Knight lost his professional wrestling debut in a "Dark Match" at the Spring Stampede in Chicago at the Rosemont Horizon. His adversary was another child star from 1970s television, the Partridge Family's Danny Bonaduce.

Knight appeared on a special episode of The Weakest Link television show that featured the cast of the Brady Bunch squaring off against each other. In the end, Knight won the show with the proceeds ($49,000) going to his selected charity, Zero Population Growth.

Continuing to pursue TV opportunities, Knight appeared on VH1's fourth season of The Surreal Life. The show garnered Knight more attention than he had received in quite some time, in part by appearing shirtless on the show and revealing a well-built body. During his stint on the show, he began a romance with a cast mate, model Adrianne Curry, winner of America's next top model cycle 1, who is almost 25 years younger than Knight. After the show, the two moved in together and got engaged, as documented on the VH1 series My Fair Brady, which premiered on September 11, 2005. The series was renewed for another season, and the couple wed in Curry's hometown of Joliet, Illinois on May 29, 2006 in a Gothic style wedding.[1]

Knight was also featured in music video for the group Click Five for the song "Just the Girl", in which he played a high school teacher. He also appeared in the Click Five's music video for "Catch Your Wave" as the hotel manager.

Christopher Knight and his former Brady Bunch co-star Barry Williams appeared in a 2006 episode of That '70s Show. He and Williams played the part of a gay couple who moved in next door. The two have remained close friends since their Brady Bunch days, and Williams appeared several times on My Fair Brady. Florence Henderson, who played mother Carol Brady, Susan Olsen, who played Cindy Brady on the Brady Bunch, and Mike Lookinland, who played Bobby Brady, also appeared in an episode of My Fair Brady. In one episode, Knight expressed how important it was for Curry to accept his close relationship with his former Brady Bunch co-stars.

Knight was a participant in VH-1's retrospective miniseries, I Love The '70s: Volume II. He and his family and friends appeared on the season finale of NBC's Celebrity Family Feud on July 29, 2008.

During the 2008–2009 television season, Knight was host of the syndicated game show, Trivial Pursuit: America Plays.

Knight has hosted a series of Jonathan Goodson-produced game show specials for the Michigan Lottery, Make Me Rich. The first special was scheduled for October 16, 2009, with a second scheduled for February 2010.[2]

Knight's manager, Phil Viardo, told a celebrity gossip website on May 29, 2011, that Knight and his wife, Adrianne Curry, were announcing their separation. The date was the couple's fifth wedding anniversary.[3]