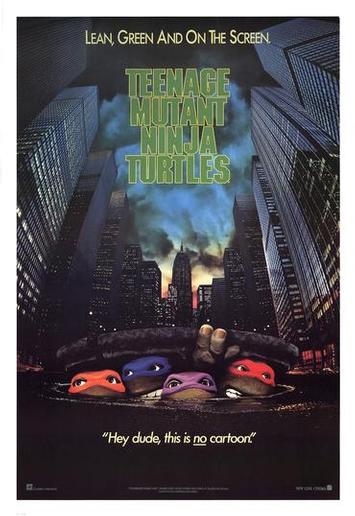 "Teenage Mutant Ninja Turtles" is the 1990 film based on the franchise. The film was followed by three sequels, "" in 1991, "" in 1993, and "TMNT" in 2007. This film presents the origin story of Splinter and the Turtles, the initial meeting between them, and Casey Jones, and their first confrontation with Shredderand his Foot Clan. The film's core plot closely follows that of the first published TMNT story, from "Teenage Mutant Ninja Turtles" #1.Fact|date=March 2008 This film is Distributed by: . Outside the , It is Internationally Distributed by: .

When the is unable to stop a severe crime wave caused by the , four new vigilantes, Leonardo, Michelangelo, Donatello and Raphael, will come forth to save the city. Under the leadership of Splinter and together with their new-found allies April O'Neil and Casey Jones, they will fight back and take the battle to Shredder.

The film kept very close to the dark feel of the original comics with only a few elements making it in from the animated series that was airing at the time, such as April being a news reporter, and the turtles having different-colored masks (in the original comic, images in color showed all the masks as being red). The film received positive reviews, was the highest-grossing independent film of all time when it was released, a huge hit at the box office, and became the fifth highest grossing film worldwide of 1990 and the most successful film in the series.

As the film begins , an investigative reporter at Channel 3 Eyewitness News, is researching a story on a recent, immense crime wave in . She is later rescued by the from a group of street thieves. As the Turtles are celebrating their victory, an ex-hockey player called Casey Jones, having become a so as to combat the crime wave, is shown beating two thieves with his sports equipment and arguing with the Teenage Mutant Ninja Turtle Raphael over the proper way to punish criminals. The crime wave is traced by April to the ; when she makes them uncomfortable, the Foot Ninjas attack her and knock her unconscious, whereupon Raphael rescues her.

As the Turtles escort April back to her apartment, where they remain for some hours, the Foot find the Turtles' lair and kidnap Splinter. They carry him back to their headquarters, where their master Shredder is forming an of corrupted, ninja-trained teenagers to build himself an empire of . One of those teenagers is Danny Pennington, the son of April's boss; having seen the Turtles at her apartment, he tells Shredder where to find them. The Foot therefore launch a surprise attack on April's apartment. Caught off-guard and outnumbered, April, the Turtles, and Casey (who had intervened when he saw Raphael in danger) are forced to escape to April's childhood home in a rural farmstead. Raphael is rendered unconscious during the battle and does not wake from his for several days, during which his brothers and their friends use diverse methods to recover from their losses.

After Raphael's recovery from his coma, the Turtles refine their ninja skills in anticipation of their return to the city. When their sense of purpose is renewed by a telepathic encounter with Splinter, they return to New York and fight the Foot while Casey rescues Splinter from the Foot Clan's lair. The Turtles take the battle to the sewers, to the streets, and ultimately the rooftops, where they meet the Shredder. The Shredder proves to be an enemy of skill outstripping their own; however, his victory is forestalled when Splinter unexpectedly arrives. Splinter then reveals that the Shredder is in fact one Oroku Saki, the man who killed Splinter's beloved master Hamato Yoshi. The Shredder is then reminded of a much-resented scar inflicted on him by Splinter. When the Shredder tries to impale him, Splinter calmly uses Michaelangelo's nunchaku to grab his attacker's spear and flip Shredder over the side of the building. As he hangs, the Shredder makes a last desperate attempt to kill his opponent; this causes Splinter to release the nunchaku, allowing Shredder to fall off of the roof of the building and into a garbage truck. Casey then activates the truck's crushing mechanism, whereupon Shredder is apparently crushed to .

The trainees of the Foot Clan confess all of their involvement to the , while April asks Casey for a kiss, which he gives wholeheartedly. The film concludes with 's track "" and the Turtles celebrating their victory over the Foot Clan. Splinter, to summarize their emotions, contributes the word "Cowabunga" (a favorite slogan in later films), which he terms "a funny".

Also, all four actors who played the turtles also appeared in cameos as minor characters, with Sisti (Michelangelo) as a pizza delivery man, Pais (Raphael) as a passenger in a taxi, Tilden (Donatello) as a messenger of The Foot, and Foreman (Leonardo) as a gang member.

The film was well received by fans, and did exceedingly well at the box office. Reviews were for the most part positive. However, Roger Ebert gave it only 2 and a half stars, saying, "But this movie is nowhere near as bad as it might have been, and probably is the best possible Teenage Mutant Ninja Turtle movie. It supplies, in other words, more or less what Turtle fans will expect."

Following the huge success of "Teenage Mutant Ninja Turtles" at the box office, several sequels were created. Only a year later, "" was released in theatres, and in 1993 "" was released in theatres. The sequels made less money and were less well-received than the first film, but it is generally thought that the first installment of the series was the best, due to it keeping itself closely aligned to the original comic book. After a number of years absence from the theatres, a fourth film was released in 2007, though unlike the first three, this was a CGI animated film.

After design sketches were created, the construction team used the studios' backlot to create some of the sets. There were problems with the manholes that led to the Turtles' home, in that an eight-foot square room had to be constructed beneath them, but found water at about five-feet, and thus had to pour concrete into the underground rooms to keep the water out. In order to make the sewer authentic, a tide-mark was given, and it was covered with brick, plaster and stucco paint to give the walls a realistic look. The Turtles themselves were done by in London. said that the creatures were the most advanced that he had ever worked with. The creatures were first made out of clay, which were then rebuilt out of fiberglass. They were produced as moulds to cast the whole body in foam rubber latex. Work was then done on mechanizing the fiberglass. The work at the Shop was completed within 18 weeks.

The film has been released to in Region 1 on September 3, 2002, though a special edition has not yet been made. Laird and Barron have expressed interest in releasing a "special edition" version of the first movie, with new scenes and other bonus materials. However, New Line Cinema's stance thus far has been that no Special Edition is planned. The current DVD release includes only minor special features such as a trailer and interactive menus. "Teenage Mutant Ninja Turtles" is also available in a three-set package with the other two films that were made in the 1990s. [ [http://www.imdb.com/title/tt0100758/dvd DVD details for Teenage Mutant Ninja Turtles] . IMDb.com. Retrieved on 29 December 2006.]

The film was also released in the format.