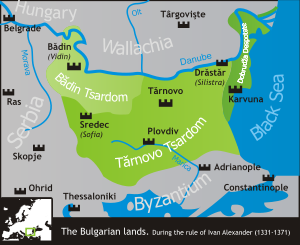 The Tsardom of Vidin

The Tsardom of Vidin (Bdin) (Bulgarian: Видинско (Бдинско) царство, Vidinsko (Bdinsko) tsarstvo) was a medieval Bulgarian state with centre in the town of Vidin. In 1356, Bulgarian tsar Ivan Alexander isolated Vidin from the Bulgarian monarchy and appointed his son Ivan Stratsimir (1356–1396) as absolute ruler of the domain of Vidin.

In 1365, the state was occupied by Hungarian crusaders, but the occupation was short-lived. In 1369, a Bulgarian and Wallachian campaign drove out the Hungarian military, but in 1393 the whole of Bulgaria, along with the rest of the surrounding region, fell to the Ottoman Empire. This brought an end to Bulgaria's medieval state empire. Vidin was now the only region controlled by the indigenous Bulgarian population and not the invading Ottoman Turks.

The Ottomans went on to conquer the despotates of Dobruja, Prilep and Velbazhd as well. Vidin's independence did not last long. In 1396, Stratsimir contributed soldiers to assist the Slavic nations' bid to overturn the Ottoman Empire. Following defeat at the hands of the Ottomans outside the city of Nicopolis, Vidin may have finally fallen under the sphere of the Ottomans led by Bayezid I. However, according to modern authors, the Tsardom of Vidin may have existed until 1422, ruled by Stratsimir's son Constantine II.