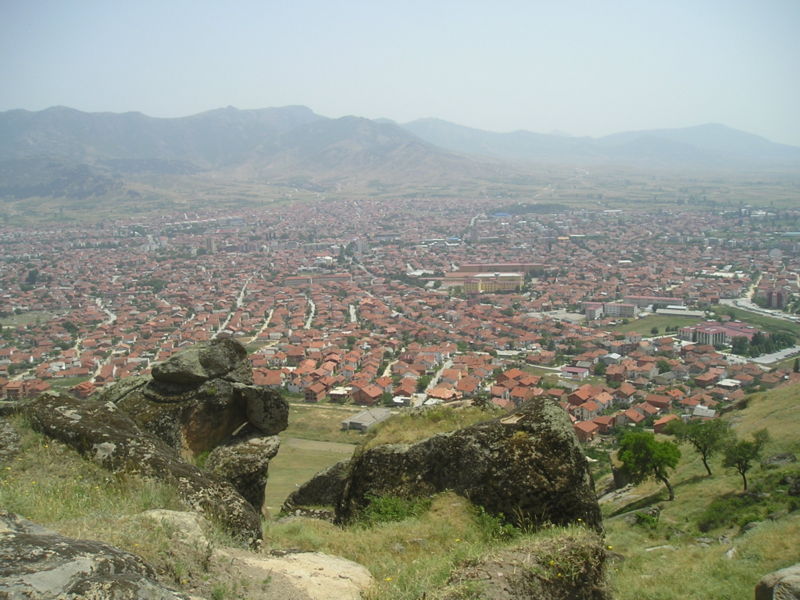 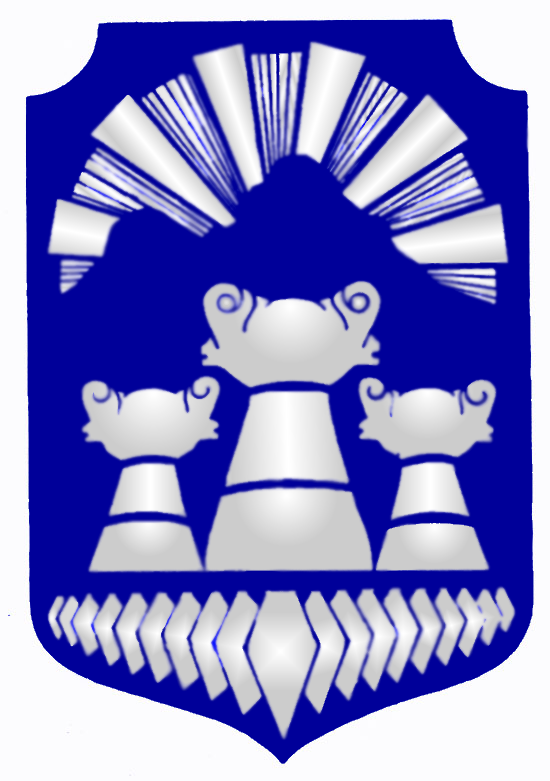 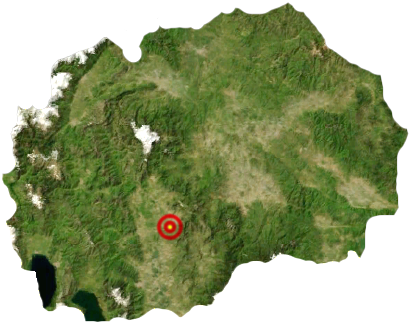 Prilep ( _mk. Прилеп, Audio-IPA|Mk-Prilep.ogg| [ˈprilɛp] ) is a city of 66,246 citizens in the and the fourth largest city in the country. Prilep is known as "the city under Marko's Towers" because of its proximity to the towers of the legendary hero .

Prilep covers 1.675 square kilometers and is located in the northern Plain, in southern Macedonia. Prilep is the seat of a municipality with the same name () and is accessed by the M5/E65. It is only 128 km (airline) from the capital , 44 km from , and 32 km from .

Prilep is a center for high-quality tobacco and cigarettes and the metal processing, electronic, timber, textiles, and food industries. The city also produces a large quantity of Macedonian Bianco Sivec (pure white ).

Tobacco is one of Prilep's traditional cash crops and prospers in the Macedonian climate. Many of the world's largest cigarette makers use Prilep's tobacco in their cigarettes after it is processed in local factories. When the was established in Prilep to create new types of tobacco it was the first example of applying genetics to agriculture in the .

The majority of the city is Macedonian; the Macedonian population at the last census was listed at 64,527. There is a Roma minority of 4,421, alongside 315 and 254 Turks. There are strong s between and in Prilep, especially since the when ten young soldiers from Prilep were killed in the civil war by Albanian insurgents.

Prilep was founded on the ruins of the ancient city of Styberra, first a town in Fact|date=September 2008 and later incorporated into the . Styberra, though razed by the in 268, remained partly inhabited. The town was first mentioned as Prilep in , as the place where allegedly had a heart attack upon seeing thousands of his soldiers had been blinded by the Byzantines after the . It was then retaken by the until it was conquered by the Ottomans. Prilep was under Constantinople's control for six centuries; later, it became part of and then broke away with the Republic of Macedonia in .

* is located in Prilep.
*Center of Contemporary Visual Arts - An art colony, hosted in the center of Prilep in the Center of Contemporary Visual Arts. The Colony has been founded in 1957 by the archaeologist Prof. PhD. Boško Babić, but organized by the initiative of Prof. PhD. Boško Babić and the academic painter - Prof. Risto Lozanovski, making it perhaps one of the oldest colonies in Southeastern Europe and the oldest one on the Balkans, for sure. It hosts painters and sculptors (working in marble, metal and wood) every year and, periodically it also hosts workshops and Symposia for vitrage (glass design), mosaics, photography, graphics and clay, from various countries around the world. The collection of sculptures carved in woods, was acknowledged as a cultural heritage by the most relevant criticizers and opinion makers. This is year (2007) it's the 50-th Anniversary of the Colony.
*Every year in October the brings together children from all over the world.
*Every year the Professional Theater Festival of Macedonia, honoring , who was born in village Selci near and .
*The Monastery of Zrze and the Monastery of the Holy Archangel Michael which has 12th and 14th century frescoes are notable sites of the culture of Prilep.

The dialect of Prilep, in the heart of the Pelagonian plain, forms the basis for the standard Macedonian language spoken today. When the was created in Yugoslavia in 1943 and the language nationally recognized the following year, Prilep, together with , was chosen as the centre for the language because of their central position on the Macedonian map. This includes the unredeemed areas of Macedonia which were of no major interest to Yugoslavia, but remained an issue for Macedonian nationalists...

There are several ancient sites in Prilep including one at , St. Nicola’s church from XIII century, St. Uspenie church in Bogorodica, St. Preobrazenie church and the Tomb of the Unconquered, a memorial in honor of the victims of fascism located in Prilep's central park. A large Roman necropolis is known there and parts of numerous walls have been found; the settlement was probably the ancient Ceramiae mentioned in the . Roman remains can also be found near the Varosh monastery, built on the steep slopes of the hill, which was later inhabited by a medieval community. A large number of early Roman funeral monuments, some with sculpted reliefs of the deceased or of the Thracian Rider and other inscribed monuments of an official nature, are in the courtyard of the church below the southern slope of Varosh. Some of the larger of those monuments were built into the walls of the church.

The most important ancient monument is the old city of Styberra situated on Bedem hill near Cepigovo, in the central region of Pelagonia. As early as the time of the Roman - Macedonian wars, this city was known as a base from which the Macedonian king set out to conquer the Penestian cities. An important site in the area is , 6 km west of Styberra, where the town of Alkomenai was probably located. It was a stronghold of the Macedonian kings after it was rebuilt in the early Roman period and was at the Pelagonian entrance to a pass leading to . Part of the city wall, a gate, and a few buildings of the Roman period were uncovered here in excavations. All recent finds from these sites are in the Museum of the City of Prilep.

The Treskavec monastery, built in the 12th century in the mountains about 10 km north of Prilep under Zlatovrv peak, at the edge of a small upland plain 1100 meters above sea level. Prilep has frescoes from the 14th and 15th centuries and is probably the site of the early Roman town of Kolobaise. The name of the early town is recorded on a long inscription on stone which deals with a local cult of Ephesian Artemis. The inscription was reused as a base for a cross on top of one of the church domes. Other inscriptions at Treskavec include several 1st century Roman dedications to . The old fortress was used by the Romans, and later the Byzantines. During the Middle Ages, King Marko rebuilt the citadel extensively, making it an important military stronghold. After all, even Tsar Samuil came here after the defeat at in .