Medieval Bulgarian coinage are the coins minted by the Bulgarian Emperors during the Middle Ages at the time of the Second Bulgarian Empire. There is no evidence that coins were minted during the First Bulgarian Empire, and minting ceased after the fall of the Second Empire with Ottoman domination in 1396 or 1422. They were gold (perperi), silver (aspri), billon (coinage of silver and copper) and copper coins, all flat and hollow. The inscriptions were usually in Bulgarian language and rarely in Greek. Due to the limited space the inscriptions were abbreviated, often written with a few letters and special signs. Artistically, they continued the Byzantine numismatic tradition but the designs were often more schematic. The main means of expression were lines and dots. The Bulgarian coins had images different from the Byzantine and Slav coinage, so they form a distinct group. The coins are an important source for the history of the Second Bulgarian Empire.

Tsar Ivan Asen II (1218–1241) is the first Bulgarian ruler from whose reign coins are preserved. It is known that his predecessors Kaloyan (1197–1207) and Boril (1207–1218) minted imitations of Byzantine coins. Although Kaloyan was given the right to mint coins by Pope Innocent III (and Boril inherited the right from him), there are no surviving coins of theirs, and historians[who?] assume that Ivan Asen II was the first ruler to actually mint coins. 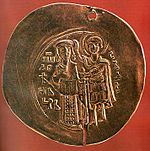 The uniqueness of Ivan Asen's gold perpera and the peculiarity of its iconography have ledt a minority of researchers to doubt its authenticity.[1] Its peculiarity is the double gesture of Saint Demetrius who simultaneously crowns the Emperor and gives him a sword, an image found in no Byzantine or other Slavonic coins.

The coinage of that ruler is distinguished by its variety, the use of new iconographic types and the precise engraving. 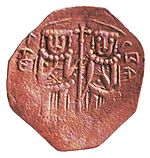 A billon coin of George I Terter and his son Theodore Svetoslav.

A silver coin of Ivan Alexander and his son Michael Asen.

Some of the copper coins of Ivan Alexander are hollow (stamini) and others are flat (asarioni).

A silver coin of Micheal Asen and his wife Irina.