The Hitchhiker's Guide to the Galaxy (film)

The Hitchhiker's Guide to the Galaxy (film)

The Hitchhiker's Guide to the Galaxy is a 2005 comic science fiction film based on the book of the same name by Douglas Adams. Shooting was completed in August 2004 and the movie was released on April 28, 2005 in Europe, Australia and New Zealand, and on the following day in Canada and the United States.

The screenplay is by Adams (who died in 2001) and Karey Kirkpatrick; the film is dedicated "For Douglas".

The Hitchhiker's Guide to the Galaxy (voiced by Stephen Fry) narrates that the second most-intelligent creatures on Earth, dolphins, attempt to warn the third most intelligent creatures, mankind, about Earth's impending destruction. Humans interpret the dolphins' communications as tricks and the dolphins leave the planet. Their final message is "So long, and thanks for all the fish."

Arthur Dent (Martin Freeman) wakes up to find his house about to be demolished for a bypass. He tries to delay the bulldozers by laying in front of them. Ford Prefect (Mos Def), his best friend, convinces Arthur to come to the pub to get some beer as a muscle relaxant. Ford explains to Arthur that he is from a planet in the vicinity of Betelgeuse working on the Hitchhiker's Guide, and that the Earth is scheduled to be demolished later that day. A Vogon planetary demolishing fleet appears, surrounds the Earth and announces Earth's impending demise so they can build a hyperspace expressway. Ford saves himself and Arthur by hitching a ride on a Vogon ship just before the Earth is destroyed. The two are discovered and as punishment are forced to listen to Vogon poetry, the third-worst in the galaxy. After that, they are thrown out an airlock but are picked up by the starship Heart of Gold before they asphyxiate. Aboard the Heart of Gold they find Ford's "semi-half brother" Zaphod Beeblebrox (Sam Rockwell), the President of the Galaxy. He has stolen the ship along with Tricia "Trillian" McMillan (Zooey Deschanel), an earth woman, and Marvin the Paranoid Android (Warwick Davis, voiced by Alan Rickman).

Zaphod explains that he is seeking the planet Magrathea, where he believes he can discover the Question of Life, the Universe, and Everything to match with the answer "42" given by the supercomputer Deep Thought (voiced by Helen Mirren). Zaphod stole the Heart of Gold to use its improbability drive to get to Magrathea through trial and error.

During one of these attempts, they end up on the planet Viltvodle VI. Zaphod decides to visit Humma Kavula (John Malkovich), his opponent from the election. Upon learning of Zaphod's plan, Kavula announces that he has the coordinates to Magrathea. He takes one of Zaphod's two heads hostage and demands they bring him Point-of-view gun created by Deep Thought, which allows the target to understand the shooter's point of view. As they are leaving the planet, Trillian is captured by Vogons. The others travel to rescue her from the Vogon home world bureaucracy, facing long lines and frustrating form processing. Before being rescued, Trillian is outraged to learn that Zaphod signed the authorization for the destruction of Earth thinking it was a request for an autograph.

The Heart of Gold is chased by the Vogons, led by Galactic Vice-President Questular Rontok (Anna Chancellor) who is attempting to rescue Zaphod from himself. As the Heart of Gold arrives in orbit above Magrathea, Arthur triggers the improbability drive to avoid the automated missile defense systems. The missles change into a a bowl of petunias and a sperm whale, voiced by Bill Bailey, who began his very short life in midair and discovered many new things while falling.

On the planet Zaphod, Ford and Trillian take a portal to Deep Thought. When they ask the computer whether it has calculated the ultimate question, it reveals that it had designed another supercomputer to do so - Earth. When the trio finds the Point-of-View gun Trillian shoots Zaphod making him understand how she feels about the destruction of Earth. She also finds out how much she loves Arthur, directly from Zaphod's mouth. Meanwhile, Arthur and Marvin miss the portal, and encounter a Magrathean called Slartibartfast (Bill Nighy) who takes Arthur on a tour of the construction floor where Earth Mark II is being built. Slartibartfast takes Arthur home where the others are enjoying a feast provided by pan-dimensional beings who currently resemble a pair of mice. Arthur realizes he has fallen into a trap. The mice, who constructed Deep Thought, used the supercomputer to build an even larger supercomputer, the planet Earth, to determine the Ultimate Question. Believing Arthur, the last remaining supercomputer component, may hold the Ultimate Answer; the mice attempt to remove his brain. Arthur kills the mice at the last moment by bludgeoning them with a teapot.

As the crew regroup outside the house they are surrounded by Vogons and take shelter in a caravan as the Vogons open fire. Marvin, still outside, is shot in the back of the head. The shot is not fatal and he uses the Point-of-View gun on the Vogons, causing them to become very depressed and unable to fight. As the Vogons are taken away and Questular rejoins with Zaphod, Arthur chooses the opportunity to explore the galaxy with Trillian and lets Slartibartfast finalize the new Earth without him. The Heart of Gold crew decide to visit the Restaurant at the End of the Universe while Marvin points out they are going the wrong way. As the he improbability drive is activated one of the images generated shows the face of Douglas Adams. 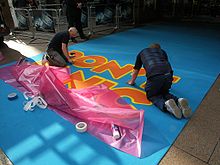 Preparations for the premiere of Hitchhiker's Guide to the Galaxy on Leicester Square.

Spike Jonze was one of several directors asked to do the film; Jonze turned the job down, recommending that the producers hire Hammer & Tongs.[1]

In a Slashdot interview, Robbie Stamp, one of the film's executive producers, noted the following about the cast of the film:[2]

Stamp also commented on how large a role the studio and screenwriters other than Adams played in making the film:

The film opened to mixed though generally favorable reviews. Rotten Tomatoes gave it an overall score of 61%, while UK top critics gave it a better score of 75%,[3] with Metacritic giving 63%.[4] Empire magazine rated the film

(four stars out of five) and said it was a "very British, very funny sci-fi misadventure that's guaranteed to win converts",[5] although Roger Ebert wrote that "[The viewer] will hear dialogue that preserves the content of written humor at the cost of sounding as if the characters are holding a Douglas Adams reading", while noting that "I do not get the joke. I do not much want to get the joke, but maybe you will."[6] Manohla Dargis called it "hugely likable" with a story arc structured "more or less" as "a long beginning and then an ending"; she calls Henson's Creature Shop's Vogons "beautifully constructed" and noted that Sam Rockwell's performance is "sensational,... riffing on Elvis and the former President George Bush."[1] Peter Bradshaw gave the film

(three stars out of five); according to him, the "film is no disgrace, and honours the Guide's gentle, low-tech BBC origins. But it doesn't do justice to the open-ended inventiveness of the original. The inevitable Anglo-American accommodations of casting have muddled its identity and the performances of the new American stars can be uneasy. It somehow seems heavier-footed and slower-moving than Adams's concept; the gravity is stronger....The savour and flavour of the Adams original, its playfully ruminative feel, has been downgraded in favour of a jolly but less interesting outerspace romp."[7] Philip French, after describing the Vogons as "a species resembling Laughton's version of Quasimodo" and noting it is "not, except in its financing, anything resembling a standard Hollywood production", called the film "slightly old-fashioned (few things date as rapidly as science fiction and our view of the future) and somewhat commonplace through its embracing familiar special effects. The jokes have to compete with the hardware and the actors executing them often exude a feeling of desperation....It's funnier, and obviously cleverer, than Spaceballs, Mel Brooks's puerile spoof on Star Wars, but a good bit less engaging than Galaxy Quest.[8]

The soundtrack CD was released on April 26, 2005,[citation needed] by Hollywood Records, a division of The Walt Disney Company. The CD has the same 33 tracks as the previous iTunes release. The enclosed booklet includes acknowledgements from Joby Talbot and notes on the creation of the song "So Long and Thanks for All the Fish," written by Garth Jennings.[citation needed]

The track "Huma's Hymn" on the soundtrack is notable for the fact that it was sung in St. Michael's Church in Highgate, London by members of local church choirs along with a congregation consisting of members of the public. The recording was open to anyone wishing to attend, and was publicised on the internet, including in a post to the Usenet group alt.fan.douglas-adams.[10]

The first version of the song "So Long, and Thanks For All The Fish" is a Broadway-style, lively version sung by the dolphins before they leave Earth. The second plays over the end credits and is in the style of 1950s male singers. The song was written by English composer Joby Talbot, conductor Christopher Austin, and Director Garth Jennings and performed by the Tenebrae Choir. Neil Hannon, founder and frontman of the Irish pop group Divine Comedy, lent his vocals to the version of the song played during the end credits. The song, in its "bouncy", opening version, was translated into and performed in Spanish for the Latin-American Region 4 DVD release.

The "Gift Set" edition includes a copy of the novel with a "movie tie-in" cover, and collectible prints from the film, packaged in a replica of the film's version of the Hitchhiker's Guide prop.

Single disc widescreen and full-screen editions (Region 1, NTSC) were released in the U.S. and Canada on September 13, 2005. They have a different cover, but contain the same special features (except the Don't Crash documentary) as the UK version.

Single disc releases in the UMD format for the PlayStation Portable were also released on the respective dates in these three countries.

The movie was made available as a paid download in the iTunes Store starting in September 2006, for the American market only. A region-free Blu-ray Disc version was released on January 2007.[11]

The film trailer featured voice over work by Stephen Fry as the Guide, describing the Hitchhiker's Guide to the Galaxy's entry on movie trailers.

The "Hitchhiker's Guide to Technology" claims that if you make yourself a cup of tea and attempt to get an object working and the tea goes cold before you finish, you are dealing with technology. Other guides include the Hitchhiker's Guide to Blogging and the Hitchhiker's Guide to Deadlines and the Hitchhiker's Guide to How to be Cool which discusses how an individual can truly be cool, instead of by following crowds, but concludes by suggesting the listener attend a showing of The Hitchhiker's Guide to the Galaxy. The Guide to websites HitchhikersMovie.co.uk describes a website as "a wonderful new invention that allows people you neither know nor care about to inform you what they had for breakfast this morning, without all that tedious mucking about in the postal system". The 'Guide to fanboys, written by Touchstone Pictures' copywriters as part of their promotion of the movie, only ever appeared as website text. Though released at the same time as the iTunes entries, it was never intended to be recorded and is otherwise unconnected with the Fry/Talbot/Browse works.