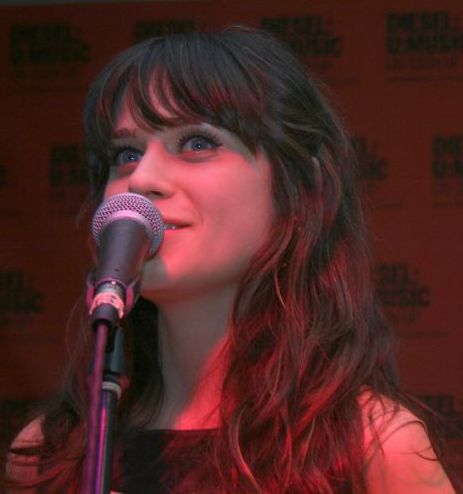 Since 2001, Deschanel has performed in the act with fellow actress . She has sung in several of her films, and her debut album "Volume One" (recorded with under the moniker ) was released on March 18, 2008.

Zooey Deschanel is the sister of who stars in the FOX TV series "Bones" as Dr. Temperance Brennan.

Zooey (pronEng|ˈzoʊiː) Deschanel was born in Los Angeles, , the daughter of -nominated and director and actress (née Weir). She is of 3/4 Irish descent and 1/4 French descent .

Deschanel lived in , but spent much of her childhood traveling because her father shot films on location; she later said that she "hated all the traveling [...] I'm really happy now that I had the experience, but at the time I was just so miserable to have to leave my friends in Los Angeles and go to places where they didn't have any food I liked or things I was used to."

Deschanel appeared in a guest role on the television series "" before making her film debut in ’s 1999 comedy "Mumford", and later in the year she appeared in the for 's single "". In her second film, director 's autobiographical "Almost Famous" (2000), Deschanel played Anita Miller, the protagonist's rebellious older sister. The film received critical praise, [ [http://www.rottentomatoes.com/m/almost_famous/ Almost Famous - Movie Reviews, Trailers, Pictures - Rotten Tomatoes ] ] but was not a success. Deschanel continued to sing, and in 2001 formed , a jazz act with fellow actress . The pair performs around Los Angeles. [ [http://query.nytimes.com/gst/fullpage.html?res=9E05EEDA103EF936A15756C0A9659C8B63 "STYLE; The Standard-Bearers"] , The New York Times, 2003. Retrieved on -.]

Deschanel played supporting roles in a series of films that included "Manic" (2001), "Big Trouble" (2002), "Abandon" (2002), and "The Good Girl" (2002). In late 2002, "" reported that Deschanel was "one of 's most sought-after young stars," and the "" wrote in early 2003 that Deschanel had become a recognizable type, due to "her deadpan, sardonic and scene-stealing [film] performances" as the protagonist's best friend. Deschanel objected to her typecasting, arguing, "A lot of these roles are just a formula idea of somebody's best friend, and it's like, I don't even have that many friends. In high school, I stayed home all the time, so I don't know how I'm everybody's best friend now."

Deschanel turned down several supporting roles and played her first lead role in "All the Real Girls" (2003). Deschanel's performance as Noel, a sexually curious 18-year-old who has a life-changing romance with an aimless 22-year-old, received critical praise, and she received an Independent Spirit nomination for Best Actress. [cite web |url=http://filmindependent.org/spiritawards/nominees/filmbyyearalpha.php?c=1&year=2004 |title=Spirit Awards] Later in 2003, Deschanel played a deadpan department store opposite in the comedy "Elf", which became a box office hit. [ [http://www.ew.com/ew/article/0,,1225341,00.html 'Talledega Nights' is a return to the top for Will Ferrell1 | Will Ferrell | Movie News | Movies | Entertainment Weekly ] ]

In 2002, Deschanel appeared in "" as Nora, the guitar player in the lead character's band, Suburban Funk. "The New Guy" was the first of Deschanel's films in which she sang onscreen; in "Elf" she duetted with Ferrell in the bathroom shower scene on "Baby, It's Cold Outside", and was also heard singing it on the soundtrack with . Subsequently, Deschanel has sung in "Winter Passing" (""), the 2005 television musical "" ("An Opening For a Princess," "In a Little While," "Normandy," and "Yesterday I Loved You"), an old cabaret song in "" and the 2007 short film "Raving" ("Hello, Dolly!"). Her piano composition "Bittersuite" was used thematically in the dark, off-beat 2004 "", in which she starred alongside Ferrell and .

In 2004, Deschanel starred in "Eulogy", and in 2005 as Trillian in the film adaptation of ' novel "The Hitchhiker's Guide to the Galaxy". Deschanel then played 's neurotic roommate in "" (2006), and appeared on four episodes of the television series "Weeds" from 2006 to 2007, playing 's quirky ex-girlfriend, Kat. In September 2006, "Variety" announced that Deschanel would play 1960s singer in the film "", to be co-written and directed by .

In 2007, Deschanel appeared in two children's films, "Bridge to Terabithia" and the animated film "Surf's Up", in which she voiced a penguin named Lani Aliikai. In December 2007, she played DG, the lead in the new Sci Fi Channel miniseries "Tin Man", a re-imagined future of 's children's book "".

In March 2007, Deschanel contributed vocals to two songs ("Slowly" and "Ask Her To Dance") on the album "" by 's band Coconut Records. In May 2007, singer-songwriter , who had previously performed with Deschanel onstage, said that he was "just finishing work" on her debut album, [ [http://www.avclub.com/content/interview/m_ward Interview: M. Ward"] , The Onion A. V. Club. Retrieved on -.] which will feature songs written by Deschanel and produced by Ward. [ [http://music.aol.ca/article/she-him-who-are-they/317320/ AOL Music Interview, July 2008] ] , "" reported that Deschanel and Ward were recording under the moniker , and that the album, titled "Volume One", would be released by on March 18, 2008. [ [http://www.rollingstone.com/rockdaily/index.php/2008/01/08/eminem-was-hospitalized-with-pneumonia-britney-spears-possibly-schizophrenic-bun-b-and-black-keys-join-sxsw-lineup-and-more/ "Rock & Roll Daily: Eminem Was Hospitalized With Pneumonia, Britney Spears: Possibly Schizophrenic, Bun B and Black Keys Join SXSW Lineup and More"] , , 2008-01-08. Retrieved on -.] [ [http://www.amazon.com/dp/B0012IWHQO Amazon.com listing] .]

In June 2008, Deschanel starred opposite in 's environmental thriller "The Happening."