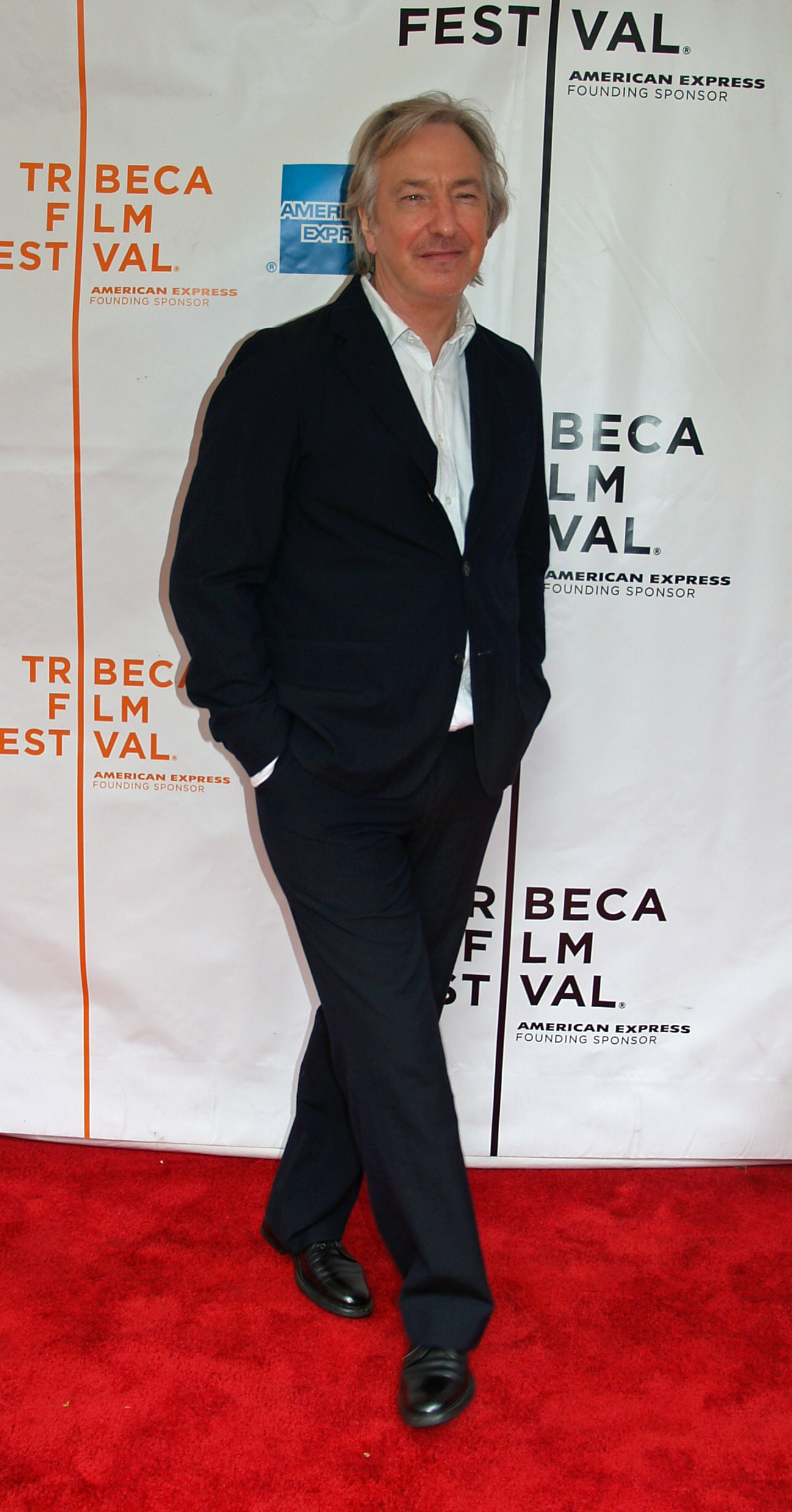 Alan Sidney Patrick Rickman (born 21 February 1946) is a - nominated English , and stage actor. He has won the , , and s, and is perhaps best known to film audiences for his roles as Hans Gruber in "" and in the "" films. He also featured prominently as the in the 1991 blockbuster, '. More recently, Rickman portrayed in 's ', a role that brought forth predictions of his first Oscar nomination (although he was not nominated).

Rickman was born Alan Sidney Patrick Rickman in , to a family, the son of Margaret Doreen Rose (née Bartlett), a housewife, and Bernard Rickman, a factory worker.

After graduating from the RADA, Rickman worked extensively with various British repertory and experimental theatre groups on productions including "" and Snoo Wilson's "The Grass Widow" at the , and has appeared three times at the . In 1978, he played with the , performing in several plays, most notably "" and "". While working with the (RSC) he starred in, among other things, "". He would be the male lead in the 1985 Royal Shakespeare Company production of "", directed by , which would be a sellout. [

He met his longtime girlfriend, politician Rima Horton, when he was 19 years old. [http://members.iconn.net/~ab234/Plays/Les_Liaisons_Dangereuses/VanityFair.html Vanity Fair - Living Dangerously (May 1987)] Retrieved on 7 January 2008.

] When the show went across the Atlantic in 1986, Rickman went on with it to Broadway and there earned a nomination for his performance. [ [http://www.broadwayworld.com/tonyawardsshowinfo.cfm?showname=Les%20Liaisons%20Dangereuses BroadwayWorld.com - Les Liaisons Dangereuses Tony Award Info] Retrieved on 7 January 2008.]

"You can act truthfully or you can lie. You can reveal things about yourself or you can hide. Therefore, the audience recognises something about themselves or they don't &mdash; You hope they don't leave the theatre thinking 'that was nice...now where's the cab?'" [Tait, Ollie; MacDonald-Smith, Fiona. " [http://www.btinternet.com/~sc.i/mellow_drama.htm Mellow Drama] ", Big Issue, May 1992. Retrieved on 23 December 2007.]

While with the RSC he shared a house with fellow company member . Rickman put her into writing comedy and proceeded to direct several of her successful shows. "If people want to know who I am, it is all in the work", he said.

To television audiences he also became known as Mr. Slope in the 's 1980s adaptation of "". He played future Irish and president in the film "Michael Collins" alongside as the title character. While playing romantic leads in British movies (Colonel Brandon in "Sense and Sensibility"; Jamie in ""), he was generally typecast in films as an over-the-top (German in "" and the Sheriff of Nottingham in '). His role in "Die Hard" earned him a spot on the American Film Institute's list of the "100 Best Heroes/Villains" as the 46th best villain in film history. His performance of Sheriff of Nottingham in ' also made him known as one of the best actors to portray a villain in films. [ [http://news.bbc.co.uk/2/hi/entertainment/1492173.stm Hannibal voted top film villain] from ""] [ [http://edition.cnn.com/2007/SHOWBIZ/Movies/10/25/top10.britishvillains/ The Screening Room's Top 10 British Villains] from ""] [ [http://www.ew.com/ew/article/0,,315063,00.html Pop Culture News TOUGH ACTOR TO FOLLOW] from ""]

Rickman has also played comedic roles in films such as "", "Dogma", and "". He won a and an for his performance as ' in 1996, and was also nominated for an Emmy for his work as Dr. in 2004's "". He appeared in the "" films as the Potions professor . Rickman was cast in 2005 as the voice of in "The Hitchhiker's Guide to the Galaxy" film. Coincidentally, Rickman and , who occupied Marvin's costume for the TV adaptation and stage shows, studied together at RADA. He was very busy in 2006 with "" (with and ) which had its debut at the Berlinale, and also ' (with ), directed by .

Rickman has performed on stage in 's "", which transferred to Broadway after its successful run in London at the and ended in September 2002. Rickman had reunited with his "Les Liaisons Dangereuses" co-star , and director for this -winning production.

His previous stage performance was as , opposite as , in the Royal National Theatre's production of "" at the in London, which ran from 20 October to 3 December 1998. Before that, he performed in 's "Tango at the End of Winter" in and the Riverside Studio production of "" in 1991, directed by . He directed "" at London's in 1995. He also directed the film version in 1996 starring and her real life mother .

Rickman has also been featured in several musical works &mdash; most notably in a song composed by the English songwriter . Moreover, the actor played a "Master of Ceremonies" part in announcing the various instruments in 's "" on the track "The Bell". Rickman was one of the many artists who recited Shakespearian s on the 2002-released "" CD, and is also featured prominently in a by the band Texas entitled "In Demand", which premiered on in August 2000. In the video, lead singer danced the with Rickman: the clip was nominated for Best British Video at the .

Rickman directed the play "" in April 2005 at the , London, and won the Theatre Goers' Choice Awards for best director. The production is based on the writings of , the 23-year-old American woman who was killed on 16 March 2003 by an i . The show played at the West End's in from March to May 2006. The play also ran at both the and the Edinburgh Fesitval in 2006.

In 1995 Rickman turned down the role of in the 1995 film "". Rickman has taken issue with being labeled as a "villain actor", citing the fact that he has not portrayed a stock villain character since the Sheriff of Nottingham in 1991. He has further said that he has continued to portray characters of complex and varying emotions, and does not think it is fair to assign characters a label of good or evil, hero or villain. Prior to the book release of "", Rickman had spoken on occasion about Snape quite easily, but with the controversy of the character following the events of the sixth book, Rickman refused to speak on the character. [cite web
last = Schwartz
first = Missy
authorlink =
coauthors =
title = Sundance Diary: Alan Rickman talks 'Harry Potter' ..., well, sorta
work =
publisher = Entertainment Weekly
date = 2008-01-24
url = http://popwatch.ew.com/popwatch/2008/01/alan-rickman-wi.html
format =
doi =
accessdate = 2008-01-25]

In 2007, Rickman appeared in the critically-acclaimed "" directed by ; he played the role of Judge Turpin, the main . According to "", Rickman performance "makes the judge's villainy something to simultaneously savor and despise", with his "oozing moral rot and arrogance". [ [http://www.miamiherald.com/1058/story/351361.html Sweeney Todd: The Demon Barber of Fleet Street (R) ***&frac12; | Sinister musical's razor sharp - 12/21/2007 - MiamiHerald.com ] ]

Rickman was chosen by "Empire" as one of the 100 Sexiest Stars in film history (No 34) in 1995 and ranked No 59 in "Empire"'s "The Top 100 Movie Stars of All Time" list in October 1997. Rickman became Vice-Chairman of the Royal Academy of Dramatic Art (RADA) in 2003. He was voted No 19 in "Empire" magazine's Greatest Living Movie Stars over the age of 50 and was twice nominated for Broadway's Tony Award as Best Actor (Play): in 1987 for "Les Liaisons Dangereuses", and in 2002 for a revival of Noel Coward's "Private Lives".

Research to find 'the perfect voice' has indicated that Rickman's voice is one of the best. ["BBC News", 2008. [http://news.bbc.co.uk/2/hi/uk_news/7426923.stm Formula 'secret of perfect voice'] .] The combination of his voice along with Jeremy Irons' voice was deemed the best voice based on intonation, trustworthiness, and soothingness.

In early 2008, several teenagers from Iowa formed a cult-like religion centering around Alan Rickman. The religion is similar to a parody of other religions, in that there are equivalents to Jesus, Buddha, and many others. Rickmanism's equivalent of Jesus is a boy named William, who is a member of this religion himself. He enjoys the attention he gets because all of the other members of Rickmanism are female. There are seven Rickmanites total: Lemily, Lasha, Laclynn, William, Kat, Sam, and Rachel the Vampire. The practice of Rickmanism involves refering to William as Jesus, and saying "Rickman" instead of "God" (i.e. "Oh, my Rickman!" "Rickman, that was awesome!").