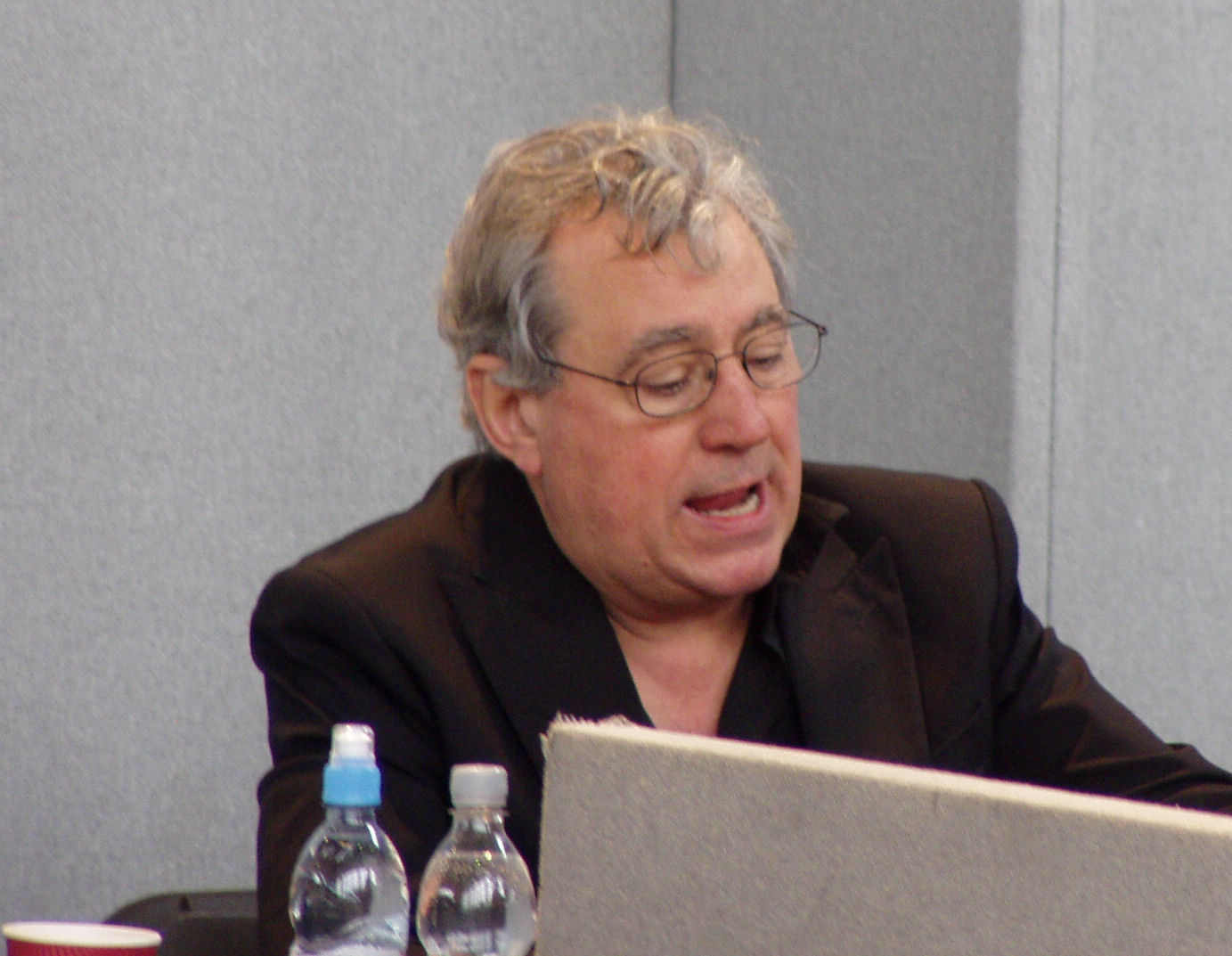 Terence Graham Parry Jones (born ) is a Welsh , and actor, , children's author, popular historian, political commentator and TV documentary host. He is best known as a member of the comedy team.

Jones was born in , . He was educated at the Royal Grammar School in , where he was ; he graduated in English at .

As a member of the Monty Python troupe, Jones is remembered for his roles as middle-aged women and the bowler-hatted "man in the street". He typically wrote sketches in partnership with Palin.

One of Jones's early concerns was devising a fresh format for the Python TV shows, and it was largely Jones who developed the stream-of-consciousness style which abandoned punchlines and instead encouraged the fluid movement of one sketch to another - allowing the team's conceptual humour the space to “breathe”. Jones also objected to TV directors’ use of sped-up film, over-emphatic music, and static camera style, and took a keen interest in the direction of the shows. He later committed himself to directing the Python films "", "", and "", and as director, finally gained fuller control of the projects, devising a visual style that allowed the performers 'space'; for instance, in the use of wide shots for long exchanges of dialogue, and more economical use of music. As demonstrated in many of his sketches with Palin, Jones was also interested in making comedy that was visually impressive, feeling that interesting settings augmented, rather than detracted from, the humour. His methods encouraged many future television comedians to break away from conventional studio-bound shooting styles, as demonstrated into the 21st century by shows such as "", "" and "The League of Gentlemen".

Of Jones's contributions as a performer, his parodic, screechy-voiced depictions of middle-aged women are among the most memorable. His humour, in collaboration with Palin, tends to be conceptual in nature; a typical Palin/Jones sketch draws its humour from the absurdity of the scenario. For example, in the “Summarise Proust Competition”, Jones plays a cheesy game show host giving a series of contestants 15 seconds to condense 's lengthy work "À la recherche du temps perdu"; in the "Mouse Organ" sketch, he plays a tuxedoed man using mallets to bash mice who have been trained to squeak at a select pitch, and when “played” in the correct order reproduce the tune "Bells of St. Mary". In both cases, the laughs originate in the madness of the idea itself. Jones was also notable for his gifts as a Chaplinesque physical comedian, perhaps best demonstrated in the "Undressing in Public" sketch. He was often cast as the straight man, or as a nerdy or put-upon character, often with ambitions or dreams beyond his abilities, in contrast to the authority figures often played by or .

Jones co-directed "" with , and was sole director on two further Monty Python movies, "Life of Brian" and "". (The latter featured one of his most famous characters, the grotesquely obese ). As a film director, Jones finally gained fuller control of the projects and devised a visual style that complemented the humour and, once again, concentrated on allowing the performers room to breathe. Examples include the use of wide shots for long exchanges of dialogue, and more economical use of music. His methods encouraged many future television comedians to break away from or studio-bound shooting styles, as demonstrated by "" and "The League of Gentlemen". His later films include "" (1989) and "The Wind in the Willows" (1996). In 2008, Jones wrote and directed an opera titled 'Evil Machines'.

On the commentary track of the 2004 "2 Disc Special Edition" DVD for the film "", Terry Jones stated that to his knowledge Ireland had only banned four movies, three of which he had directed: "The Meaning of Life", "" and "".

He co-wrote "" with Palin, and wrote the screenplay for "Labyrinth" (1986), although his draft went through several rewrites and several other writers before being filmed; much of the finished film wasn't written by Jones at all. He has also written numerous works for children, including "Fantastic Stories" and "The Beast with a Thousand Teeth."

He has written books and presented television documentaries on medieval and ancient history and the history of s. His series often challenge popular views of history: for example, "" (2004) argues that the Middle Ages was a more sophisticated period than is popularly thought, and "" (2006) presents the cultural achievements of peoples conquered by the in a more positive light than Roman historians typically have.

He has written numerous editorials for ", " and "" condemning the . Many of these editorials were published in a paperback collection titled "Terry Jones's War on the War on Terror".

"Chaucer's Knight: The Portrait of a Medieval Mercenary" (1980) offers an alternative take on the historical view of 's "" as being a paragon of virtue. Jones asserts that, after closer examination of historical rather than literary context, The Knight is actually a typical and a potentially cold-blooded killer.

Jones has performed with The Carnival Band and appears on their 2007 CD "Ringing the changes" (Park Records PRKCD98).

In January 2008, the , in , , premiered "" - a musical play, written by Jones (based on his book) and with original music by Portuguese composer . Jones was invited by the Teatro São Luiz to write and direct the play, after a very successful run of "", a short play based on Jones' "", also with music by Luis Tinoco.

Jones was married from 1970 to 2003 to Alison Telfer, and they have two children together, Sally (born in 1974) and Bill (born in 1976). He was kicked out of the house by his family after admitting to have an affair with 19 year old Anna Soderstrom.On , it was reported in "", that Jones had been diagnosed with .

*An asteroid, , is named in his honour. When asked during a webchat if this was the greatest honour he has received, Jones replied, "I didn't realise it was an honour to have a barren lump of rock named after one."