The old village of Cedesene is situated two and a half miles east of the city. In 1086 it was a manor in the possession of Henry de Ferrers[2] and was worth the impressive sum of three pounds. 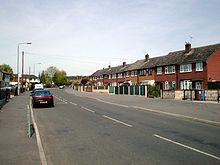 There are many focal points and small shopping centres, the largest being on Nottingham Road (a Roman road).

The focal point of the village is probably the ancient church of St. Mary's. It is important as a dated example of church architecture before the advent of the perpendicular style. It was rebuilt by Henry Chaddesden, Archdeacon of Leicester, around 1357. The tall and spacious chancel running from its nave and aisle, dates from this period. Its west tower is perpendicular in style with its big west door and window. Restoration work on the chancel was carried out in 1857 by G. Place.

The church contains a rood screen and an unusual chalice shaped font, believed to be over 600 years old. There are monuments to the Wilmot family who were local landlords. In the church yard is a small mound, where 6 almshouses used to stand. They had been founded by Robert Wilmot. The family lived at Chaddesden Hall, which was demolished in the 1920s when the Wilmot family sold its estate. The grounds are a well used park, which contains a children's play area as well as facilities for sports like cricket and golf.

The Corporation of Derby acquired much of the land when it came up for sale in the 1930s by the Wilmot family, and started to build houses on it. The shopping area on Nottingham Road was developed around the same time as was Chaddesden Park Hotel.

St. Mark's Church on Francis Street was built in 1938 by Naylor & Sale, and St. Philip's Church on Taddington Road was built in 1955 by S.W. Milburn to service an ever-expanding population. The bell in St. Philip's came from Derwent Woodlands church in Derwent village, which was "drowned" in the 1940s with the building of Ladybower Reservoir (near Bamford). Chaddesden soon became the largest suburb of Derby.

The lodge and the entrance to the grave yard on Nottingham Road were designed by H.I. Stevens around 1854. The Wilmot family name still appears in the names of local businesses, including the Wilmot Arms Public House at the junction of Morley Road, Chaddesden Lane and Wood Road.

Colonel Sir Henry Wilmot received the V.C. for bravery. He was born and is buried here.[3]

Chaddesden Wood, on the northern fringe of the village, is a 10 acre (4 ha) designated Local Nature Reserve.[4]