Normanton is a southern suburb of the city of Derby in Derbyshire, England, situated approximately two miles south of the city centre. Neighbouring suburbs include Littleover and Pear Tree.

The modern suburb grew from an ancient village, formerly known as Normanton-by-Derby. The area is thought to have been the site of one of the major Viking settlements in the Derby area, hence the original name, Normanestune, which means Norseman's settlement. Normanestune is mentioned twice in the Domesday Book, once recording the lands of the King and again for land belonging to Henry de Ferrers[1] when it was valued at ten shillings.[2]

The location of the original village lies just south of the modern ring road, its main thoroughfare commemorated by the present day Village Street. St Giles' Parish Church stands on Village Street, atop a slight hill, and its spire can be seen across most of the district. In the 1740s the Dixie family had Normanton Hall built; this was later used as a school building in the 20th century.

The portion of the district to the north of the ring road is properly called New Normanton, although in popular usage the name is rarely heard. The area began to rapidly urbanise in the mid 19th century, Normanton eventually being absorbed by the expansion of Derby's boundaries up to the 1930s. Much of the housing stock in the area is typical Victorian brick terracing. 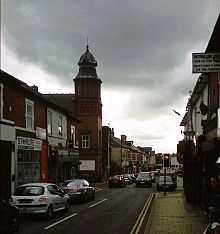 Modern Normanton has a high ethnic minority population, with the largest concentration of Derby's Asian community. Areas such as Normanton Road (the main thoroughfare leading to the centre of Derby) have numerous Asian shops, businesses, fast food outlets and in particular is well known for its range of Indian, Pakistani and Bangladeshi restaurants. Since the expansion of the European Union in 2004, there has been a noticeable influx of new immigrants to the area from various Eastern European countries.

Reflecting Normanton's religious diversity are a wide number of places of worship, including the Guru Arjan Dev Gurdwara on Stanhope Street, the Singh Sabha Gurdwara on Princes Street, the Ramgarhia Gurdwara on St. James Street and the Guru Ravidass Gurdwara on Duncan Road. There are also many mosques in Normanton such as the mosque on Hastings Street, the Mosques on Western Road and Cameron Road, the mosque on Dairy House Road and the Mosque on Rosehill Street. There is also a hindu temple on Peartree Road. There are various Christian churches meeting in the area, from mainstream Anglican and Roman Catholic congregations to free churches and newer house churches. Some congregations have disappeared but many are alive and well in multi-cultural Normanton. There is a polish church off St Chad's Road, a Ukrainian church off of Dairyhouse Road, and a Serbian church off of Dale Road.

A prominent local landmark was once the Normanton Barracks, headquarters of the Sherwood Foresters regiment. Demolished in 1981, the site is now the Foresters Leisure Park, including the Showcase cinema. Nearby is the Oast House pub, a notable modern building which is, as the name suggests, in the style of a traditional English oast house (a type of structure totally alien to this part of the country) and just along the ring road on Village Street, the Garrison Church, St Giles', where there are numerous memorials to Sherwood Foresters.

An important landmark in the Normanton area was the church on St Chad’s Road however this was demolished in the mid 90's and the area is now used as a playing field for children attending St Chad’s School. There were talks of creating a faith centre at this location before the turn of the millennium however these plans failed to materialize due to a lack of funding. 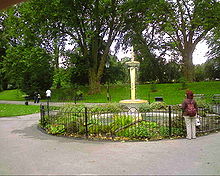 The fountain at the Arboretum

The area's main public recreational facility is Normanton Park, opened in 1909; this date is proudly recorded on the clock-tower over the small building used as a tea room.

The Arboretum is an important landmark located in the area. It became the first public park in the country when it was given to the town of Derby by Joseph Strutt on Wednesday, September 16, 1840. Parts of the park were used in Ken Russell's film of D. H. Lawrence's 'Women in Love'.

The Derbyshire Tennis Centre is adjacent to Normanton Park.

The Baseball Ground was built in the northern part of Normanton in 1890, first being the home of Derby County Baseball Club until they were disbanded in 1898. It remained open for the next 105 years, however, as Derby County Football Club had played football matches there since 1895 and despite the relocation of the first team to the new Pride Park Stadium in 1997, it remained in use until May 2003 for the club's reserve and youth sides. The stadium was demolished that autumn and the site has since been redeveloped for housing.

Steve Bloomer, Derby County F.C. footballer. Lived for much of his life in the Normanton and Pear Tree areas, including both 34 and later 81 Cummings Street.