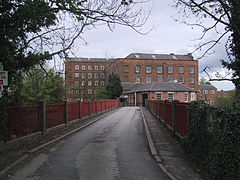 View of the toll bridge and mill across the River Derwent 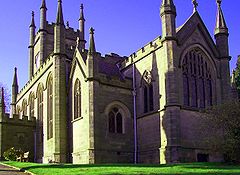 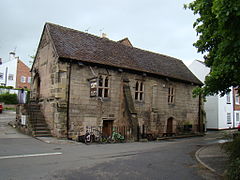 Darley Abbey is a village on the outskirts of Derby, England. The village is located on the River Derwent and is associated with the world heritage site of Derwent Valley Mills.

Darley Abbey was originally the site of an Augustinian priory called Darley Abbey (or Darley Priory) which was established in 1137 and dedicated to St Helena. It had originally been founded in Derby by Robert de Ferrers, 2nd Earl of Derby and later removed to Darley. The Abbot was granted by this Earl and some of his successors many privileges in Duffield Forest and Chase.[1] The Abbey was founded about 1140, and soon became one of the richest Abbeys in Derbyshire. The Monks owned and operated the original Derby School, but the Abbey was almost totally obliterated during the Dissolution of the Monasteries. There are only two remaining buildings from the monastic period. One is now The Abbey Pub which was renovated to its present state in 1978, and the other makes up part of a private dwelling on Abbey Lane.[2]

The mill was built in 1783 by Thomas Evans, who hailed from a family with interests in lead iron and copper. Initially, he partnered with Richard Arkwright and Jedediah Strutt in the venture. It was a six storey building powered by water, with an enormous weir across the river. It was destroyed by fire in 1788 and rebuilt with sheets of tin nailed to the beams as protection.[3]

By 1830, Evans constructed a factory village of three-storey cottages across the river from the mill for his 500 employees. This village, along with its toll road, still exists today. In 1970, the entire area was made into a conservation area, leading to it being part of the Derwent Valley Mills heritage area.