The Chevrolet S-10 is a compact pickup truck from the Chevrolet marque of General Motors. When it was first introduced in 1982, the GMC version was known as the S-15 and later renamed the GMC Sonoma. A high-performance version was released in 1991 and given the name of GMC Syclone. The pickup was also sold by Isuzu as the Hombre from 1996 through 2000. There was also an SUV version, the Chevrolet S-10 Blazer/GMC S-15 Jimmy. An electric version was leased as a fleet vehicle in 1997 and 1998. Together, these pickups are often referred to as the S-series.

In North America, the S-series was replaced by the Chevrolet Colorado, GMC Canyon, and Isuzu i-Series in 2004.

The current S-Series remains in production in Brazil.

The first compact pickup from General Motors was the rebadged Isuzu KB sold since 1972 as the Chevrolet LUV. The 1973 Arab oil embargo forced GM to consider designing a domestically-produced compact pickup truck. As usual, parts from other GM chassis lines (primarily from the GM G-body intermediates) were incorporated. The first S-series pickups were introduced in 1982. The Chevrolet and GMC models were identical apart from the grille, tailgate and assorted insignia. An extended cab and "Insta-Trac" four wheel drive were added the next year along with two new engines.

The sport utility S-10 Blazer and S-15 Jimmy debuted in 1983; GM was the second to introduce compact sport utilities behind Jeep but ahead of Ford. This trend occurred again where 4-door variants were introduced in March 1990 as 1991 models alongside the similar Oldsmobile Bravada.

New heavy-duty and off-road suspensions appeared in 1984 along with a hydraulic clutch, while the big news for 1985 was the discontinuing of the Cavalier's 2.0 L OHV I4 in favor of Pontiac's 2.5 L "Iron Duke" OHV I4. The OHV-derived 2.2 L diesel engine and 1.9 L SOHC gas engine, both from Isuzu, were gone the next year, leaving just the Iron Duke and updated 2.8 L V6. A much-welcomed 4.3 L V6 was added for 1988, and anti-lock brakes came the next year.

The GMC S-15 became the GMC Sonoma in 1991, and the Sierra trim packages are dropped to avoid confusion with the new GMC Sierra full-size pickup. The GMC Syclone also appeared that year. The Sonoma GT bowed in 1992. Added to this was the 4.3 L V6 Vortec W code engine. This generation's last year was 1993.

The Vortec is essentially the standard Z code 262 cu in (4.3 L) engine. The difference is the W code used a balance shaft, roller cam shaft, different heads, and Central Port Injection. The 1992 and 1993 engine came in either a 195 hp (145 kW) or 205 hp (153 kW) rating. The High Performance version came with a larger diameter Y pipe, and was only installed in some of the Blazers and S-10 Jimmies as well as the S-10 Pickups

The Sonoma GT was a performance package available on the 2WD regular cab short bed Sonoma. It was available for the 1992 model year only as an entry-level version of the GMC Syclone. A total of 806 were built.[citation needed] The truck was powered by a high output L35 Vortec 4.3 L V6. It featured central multi-port fuel injection and produced 195 hp (145 kW) and 260 lb·ft (350 N·m) of torque.[1] It was equipped with a 4L60 automatic transmission and a limited-slip differential with 3.42:1 gearing.

Modified by Prototype Automotive Services of Troy, Michigan, it was fitted with the Syclone interior package featuring black cloth bucket seats with red piping, a special gauge package, and a floor shift console.

Some 1992 and 1993 Sonomas came with a factory equipped L35 W code engine. For 1993 no specialty labeling or limited edition tags were known to be used with the W code engine. Production totals for these vehicles are unknown.

This GMC came with an LB4 4.3L V6 with lower compression pistons and a turbocharger. They produced ~280 hp. 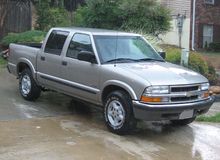 The second-generation trucks arrived in the 1994 model year. All of the special models (the Syclone, Typhoon, and Sonoma GT) were discontinued, but the changes to the pickup brought it in line with its major competitor the Ford Ranger. The Iron Duke 4 cylinder and 2.8 L 60° V6 engines were retired, the 4.3 L Vortec V6 was enhanced, and a new 2.2 L 4 cylinder engine (which had been introduced in 1990 on various FWD GM compact and mid-size platforms) became the engines of choice to power the second generation of S-10's.

Much of the chassis components were the same as the first generation (the A-frames between the first and second generation were the same although they were originally sourced from GM's G-body vehicle lineup), along with the steering knuckle, leaf springs, and differential assembly but suspension and axles were greatly enhanced.

Generally, for the 2WD trucks, the 8.5" rearend was only used when it came with both a manual transmission and the large 4.3 L (262 cu in) V6 engine; it was an option for 4WD trucks with either transmission. This was also the year that GM introduced the ZR2 Offroad Package.

For 1995, a driver's side air bag was added. In 1996 the 4.3 L engine was refreshed, and a third (rear) door was added for extended cab models, along with the sportside bed option. In 1998, the exterior, interior, brakes, and 2.2 L I4 engine were refreshed, along with a "next-generation" supplemental restraint system that added a passenger side air bag. "Auto-Trac" all-wheel drive also became an option starting in 1999 for the 4WD Blazers. The SS package was replaced by the "Xtreme" package. In 2001 a Crew Cab option was added and was available in 4WD and automatic transmission only. The S10 extended and short cabs were discontinued in 2003 and the S10 crewcab was discontinued in 2004 in North America.

Base 2WD models came with 15x6.5 inch wheels with directional vents, Xtreme and ZQ8 models came with 16x8" wheels while 4WD models (including the ZR2) used 15x7" wheels. The 14-inch (360 mm) wheels used on the first generation were discontinued.

Second-generation S-series were also produced locally in Brazil; and are still in production even though the North American version of the S-series was discontinued in 2004. Brazilian S-10s have a different front grille, lamps and bumper, and are available with a 2.8 L diesel engine built by MWM with 140 hp (104 kW) and a 2.4 L Petrol/E-96h ethanol FlexFuel engine with 147 hp (110 kW).

The 2010 S10 is produced in Latin America only, as of right now. It is offered in four different trim levels: Colina (base), Tornado, Executive, and Advantage. The drivetrains are the 2.4 L flexpower engine and the 2.8 L turbo diesel motor. It has an enhanced safety system including collision avoidance, steel ladder type frame, two stage multileaf rear springs, crush zones, side door beams, PASSlock system, remote keyless entry, and driver and passenger side airbags. It also has features to keep it looking good throughout the life of it, such as a corrosion resistant frame, galvanized steel body panels, advanced clear coat paint, double wall welded pickup box, and stainless steel exhaust.

The Chevrolet S-10 SS was a high performance version of the S-10, introduced in 1994. Fewer than 3000 SS's were produced yearly on average. When introduced, the SS was sold in only three colors: Onyx Black, Summit White, and Apple Red. The SS was discontinued in 1998. In 1999, it was replaced by the S-10 Xtreme.

A 4.3 liter V6 (which was optional on regular S-10s) was the primary engine used in the SS version, producing between 180 and 195 hp (145 kW). The SS included lowered suspension (96-98), cosmetic changes such as a different grille, body-colored bumpers, 16" wheels (96-98), and other sporty touches. All SS versions were regular cabs. A step-side version was available from 1996-1998. The SS option package was only available with an automatic transmission and 3.42 posi-traction rear-end.

The ZR2 package is an off- road package available for the second generation Chevy S-10. The ZR2 package included a 4-inch (100 mm) wider track width, 31" BFG all-terrain tires, 2 extra inches of ground clearance, fender flares, and an 8.5" chevy 10- bolt differential in the rear with 3.73:1 gears.

The 2wd S-series pickup shares several front suspension components with the GM G-body platforms. Along with the fact that the optional 4.3 liter V-6 shares several characteristics and dimensions of the early small block Chevy V-8 it has become a popular platform for Hot Rodders. Since the introduction of the S-series the ingenuity of its owners has made the V8 installation one of the most popular American domestic engine swaps. With relative ease the V-8 swap has seen almost every size small block Chevy displacement produced from 262 in³ to the large 400 cu in (6.6 L) engine, including the popular LS series engines. Some owners have even been able to install the big block GM engines such as the 396-454 in³ engines with minor modifications.

The chassis and running gear are also a common swap under older cars and pickups. This gives the advantage of using off the shelf parts, full independent front suspension, disc brakes and a complete late model drivetrain. Most commonly, these are retrofitted under the body of an early 1950s Chevy pick up. [2]

The eighth digit of the VIN denotes the engine code.