The Daewoo Lacetti is a compact car made by the South Korean automaker GM Daewoo since 2002. The first-generation Lacetti was available as a four-door sedan, a five-door hatchback or a five-door station wagon. The sedan and wagon were designed by Pininfarina, and the hatchback by Giorgetto Giugiaro. The hatchback, known as Lacetti5 in South Korea, was introduced in summer 2004.

In November 2008 the second-generation Lacetti was launched under the name Lacetti Premiere, being a badge-engineered version of the Chevrolet Cruze - though co-developed by GM Daewoo and Chevrolet.

In South Korea, the 4-door Daewoo Lacetti was released in 2002. The 5-door hatchback showed off only after the 2004 facelift of the sedan, which mainly included a new front grill, switching from a three-part corporate Daewoo grill to a simpler, Chevrolet-style grill. The hatchback name was Lacetti5, offering a specific design for the front, rear and dashboard.

The wagon version, called simply Lacetti Wagon, was introduced in late 2007 - strangely as it was already sold in many other countries. It had the same dashboard than the hatchback, with the sedan front end. At the same time, GM Daewoo introduced the VM Motori Diesel engines on the Lacetti range.

When the Lacetti Premiere was introduced in November 2008, the sedan and wagon version sales were discontinued, leaving the only hatchback in the range, renamed Lacetti EX. The Lacetti EX was discontinued in October 2009.

In Australia and New Zealand, the Daewoo Lacetti was briefly sold between 2003 and 2004 as a four-door sedan. During the 'Asian Economic Crisis', Daewoo became technically insolvent and the company withdrew from the Australian market.

From 2005, the Lacetti (sedan and wagon) and Lacetti5 were sold together as the Holden Viva. It was introduced at around the same time as the Daewoo Gentra-based Holden Barina. Unlike the current Barina, however, the Viva was meant to be below the premium Holden Astra as a budget alternative.

With the release of the all new Holden Cruze in mid 2009 the Viva ceased to be sold in Australia.

The Lacetti was available in Canada as the Chevrolet Optra in two models, a four door hatchback (the Optra5), and an Optra Wagon, all in LS or LT trim levels (2005 Wagon only had Base or LS trim levels) . The sedan was available in 2004 and 2005, but was removed in 2006. All are powered by the 2.0 L inline-4 D-TEC engine, rated at 119 hp (89 kW) at 5400 rpmand 126 ft·lbs (171 N·m) of torque at 4000 rpm, driving the front wheels through either a 5-speed manual transmission or a 4-speed automatic. Despite its compact size and the 2.0L engine, fuel economy was poor rated at 10.7L/ 100 km for city and 7.4 for highway driving which was worse than midsize cars like the Toyota Camry or Honda Accord, considering that the Optra was a compact car.[2]

The car was positioned as a versatile and fun to drive but affordable budget compact family car. Brakes are disc, front and rear. The Optra slotted between the Cobalt and the Aveo, and it replaced the Daewoo Nubira.

The Optra5 hatchback was added to the lineup in 2004 and was more contemporary in styling and equipment, with projector type headlights and fog lamps, clear taillight lenses, blackout grille, and minimal front and rear overhang with length only 169 in (4295 mm) on the same wheelbase, height, and width. Weight is 2765 lb (1254 kg). In addition to the same options available on the sedan LS and LT models, an options package containing alloy wheels, sunroof, spoiler, leather steering wheel and shift knob, and steering wheel mounted controls for the 8 speaker audio system was in keeping with the younger enthusiast market.

The Optra Wagon was also added to the lineup in 2005 but shares styling with the sedan. While wheelbase and width are also shared with the sedan, the wagon is taller at 59.1 in (1500 mm) and slightly longer at 179.7 in (4565 mm), and heavier at 2855 lb (1295 kg). The wagon has standard alloy roof rails, 60/40 folding rear seat, and a 12 volt power outlet in the rear compartment, in addition to the same options available on the sedan LS and LT models.

General Motors Canada discontinued the importation of Optra for 2008.[2]

In China, the cars are marketed as the Buick Excelle sedan or wagon and Excelle HRV (hatchback). The sedan, which is also assembled in China, features an updated exterior. GM confirmed the Excelle's successor at its extended product review in August 2009. The car will be based on the Chevy Cruze and will also be sold in the U.S. The second generation hatchback (Excelle XT) made its debut in 2009 while the sedan (Excelle GT) made its debut in 2010.

In Europe, the car was initially sold as the Daewoo Nubira, with the production model being introduced at the Frankfurt Motor Show in September 2003. However, by the end of 2004, it was rebadged Chevrolet Lacetti throughout the continent. As with its home market, in some European markets, the Lacetti name is also used for the entire range of sedan, station wagon and hatchback models on the same J-series platform. In Finland and Germany, for example, only the hatchback is sold under the Lacetti name.

The European models were initially only available with the following gasoline-powered 4-cylinder engines:

A diesel-powered version was later added to the line-up with these specifications:

In Europe, the sedan version was initially sold as the Daewoo Nubira. However, in late 2003, it was announced that Daewoo will be rebranded Chevrolet in some European markets. The Chevrolet Nubira went on sale in early 2004, initially only in Eastern Europe. When Daewoo was rebranded Chevrolet across Europe by the end of 2004, the Chevrolet Nubira was renamed Chevrolet Lacetti in some markets for the 2005 model year, which expanded the Lacetti line-up to include both the sedan and station wagon versions in addition to the 5-door hatchback version, in line with Korea.

In 2002, The Lacetti is manufactured in India and sold as the Optra and the hatchback version is sold as the Chevrolet Optra SRV (formerly known/sold as Chevrolet SRV), which they plan to get out with a 2L diesel engine in the near future.

In 2007 GM India came out with a diesel engined Optra called the Optra Magnum. The Magnum had a different nose, and interiors as compared to the petrol version. Subsequently the petrol version got the new nose treatment(like that of the Optra SRV but with a slightly different front grill) and tail lights, and are sold as Optra Magnum petrol/diesel.

In Japan, Suzuki briefly distributed the Lacetti as the Chevrolet Optra Wagon. It was available in two trim levels, the LS and the LT. Both came with either a 5-speed manual or 4-speed automatic transmission with a console shift. The Optra Wagon was powered by a 1.6 L or 1.8 L engine.

In Mexico, the Lacetti came to the market in 2006 as Optra to replace the Chevrolet Cavalier, and it was sold only as a sedan. The Optra was phased out after the 2009 model year in favour of the Chevrolet Cruze, although for now, the Mexican Cruze is an imported model from South Korea. As the United States and Canada got the Lacetti for the 2004 model year, Mexico got the car 2 years later, making Mexico the last North American country to get the car.

In Colombia, under the Chevrolet brand, was launched in 2004 with the sedan version of the following engine:

In 2006 it introduced the hatchback version, with the aforementioned 1.8 liter engine only option.

By the end of 2007, replaces the 1.4 liters engine with the following:

In 2008, the saloon version got a facelift, with a sportier interior and a front styling similar to the hatchback version. 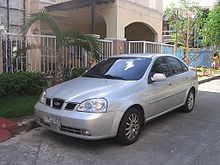 In Singapore, Chevrolet replaced the Daewoo nameplate after GM bought Daewoo. It still offers the same line-up than GM Daewoo, naming the Optra sedan, Optra station wagon and Optra5 hatchback in Malaysia, Thailand, and the Philippines. In Indonesia, the sedan is simply called Optra or Optra Magnum for the facelift model, and Estate for the station wagon. The vehicles use the 1.6 L or 1.8 L engine with an automatic transmission available for selected models.

As of 2011, VIDAMCO of Vietnam produces the J200 sedan as the "Chevrolet Lacetti" in complete knock-down (CKD) form at its Hanoi production facility.[3] Production in Hanoi began in 2004.[4]

Suzuki marketed a rebadged Lacetti as the Forenza and Reno beginning in the United States in 2004 — following the end of Daewoo's North American operations in 2002 and replacing the Daewoo Nubira station wagon and sedan. The Forenza/Reno falls between the Aerio (later SX4) and the now-discontinued Verona. In the territories of Guam and Northern Mariana Islands, it was sold as a Chevrolet Optra, but it was only available as a sedan.

It is sold as the Chevrolet Lacetti and includes 5-door hatchback, sedan and station wagon models. The entire line of models are produced at the Avtotor plant in Kaliningrad with full cycle of manufacturing.

The Russian models are available with the following gasoline-powered 4-cylinder engines: 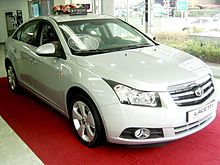 The second-generation, known as the Lacetti Premiere in South Korea, built on the GM Delta II platform is sold in most markets as the Chevrolet Cruze.

This model is known as the Chevrolet Lacetti in the United Kingdom and is available in Hatchback or Estate body styles. It is very similar to the older model and shares many parts, including the bonnet, headlamps and front bumper.

The Chevrolet Lacetti was picked as the new "reasonably-priced car" in Top Gear's "Star in a Reasonably-Priced Car"[5] segment for season 8 in 2006, replacing the Suzuki Liana, which had ceased production. In this segment of the show, celebrity guests set timed laps of the Top Gear test track driving the Lacetti.

In the first episode of series 15 of Top Gear, broadcast on BBC2 on 27 June 2010, the Lacetti that was used for the power laps was given a 'Viking Burial' by presenter Richard Hammond when an industrial chimney was demolished, knocking it over and burying the Lacetti in the process. Soon afterwards, the new reasonably priced car (a Kia Cee'd) was unveiled to the audience.