The Opel Zafira is a compact MPV engineered and produced by the German automaker Opel. The Zafira is branded as Vauxhall in the UK.

The first generation of Zafira is usually referred to as Zafira A, as is customary for Opel models. The car was based on the same platform as the 1998 Astra G/B and shared much in common with that car. The Zafira A body was used in GM/Opel's concept hydrogen-powered fuel cell vehicle the HydroGen3. The Opel Zafira A was replaced by Zafira B in Europe and Japan from 2005, but was still sold in most other markets until 2011, except for Australia and New Zealand, where the model was cancelled altogether. The Zafira was sold in the Philippines from 2001 to 2005, being the last European-based Opel car to be sold in the Philippines after they stopped selling the Opel Astra in 2003.

The Opel Zafira has seven seats arranged in three rows, the back row of which can be folded into the floor to create more space, individually or together, rather than requiring that the extra seats be physically removed from the vehicle. The system was named Flex 7. 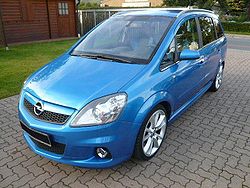 The Zafira B debuted in Europe in 2004, and sales started in 2005. It also shares the platform and mechanicals with the Astra, this time the H/C model.

In February 2006, Zafira B was launched in Singapore. By March 2006, the model had only been introduced in Europe, Singapore and Japan, superseding the previous Zafira and the Subaru Traviq, respectively. In April in Mexico and later in September 2006 in Chile, this model was introduced, branded as Chevrolet Zafira.

On the British television series Outnumbered, The Brockman family (main family) owned a Vauxhall Zafira until the 2011 series, where they replaced it with a Ford Galaxy people carrier.

In Mexico the Opel Zafira was discontinued after the 2006 model year, and replaced by the 5-passenger Chevrolet HHR (discontinued in Mexico since 2009).

It has so far been a huge sales success in the United Kingdom, proving even more popular than its predecessor. In 2006 it was the UK's tenth best selling new car, proving more popular than the Vectra that just eight years earlier had been the brand's best selling product.[citation needed] By 2010, however, reflecting both its status as a run-out model and adverse consumer reaction to uncertainty over Opel's future, the car was being outsold in the ratio of nearly 3:1 by the more recently face-lifted Volkswagen Touran on the German market, with 2,568 Zafiras sold in the first two months of the year against 7,270 Tourans.[1]

The Zafira B's engine lineup is partly adopted from the previous Astra/Zafira generation, but Opel replaced the old 2.0 and 2.2 turbodiesel I4 engines with 1.9 L common-rail turbodiesels developed by Fiat (Multijet). Opel Performance Center developed a turbocharged 240 hp (180 kW) 2.0 L performance version of the Zafira B as well. A CNG (Compressed Natural Gas) version of the new Zafira with a 1.6 L engine is also available.

The production version is expected to debut at the 2011 Frankfurt Motor Show in September, and go on sale in early 2012.[4]