Miriam Kapili Kekāuluohi Likelike (1851–1887) was a Princess of the Kingdom of Hawaiʻi, sister of the last two ruling monarchs, mother of Princess Kaʻiulani, last heir to the throne, and mistress of the ʻĀinahau estate.

She was born January 13, 1851 in Honolulu, Oʻahu. Her mother was High Chiefess Analea Keohokālole and father was High Chief Caesar Kaluaiku Kapaʻakea. She was the youngest sister of Moses Kapaʻakea, James Kaliokalani, David Kalākaua, Lydia Liliʻuokalani, Kaiminaʻauao and Anna Kaʻiulani, and the older sister of William Pitt Leleiohoku II. Because Likelike was not in the best of health as a child, she was sent to live in the dry climate of Kona on the island of Hawaii where she was hānai to a chiefly couple there. Like many of her siblings, she was most likely given in hānai to a family in Kona. At the age of 6, she returned to Honolulu and remained there until her marriage.

On September 22, 1870 she married Archibald Scott Cleghorn, a businessman from Scotland almost twice her age. The wedding was at her sister's house, Washington Place. Archibald was 35 and Miriam was 19. Like her sister Lydia's marriage to John Owen Dominis, her marriage with Cleghorn did not always run smoothly. Victorian gentlemen expected to be the lord of their castle, their servants, their children, and even their wives. But Hawaiian nobility, aliʻi, male or female, were raised to rule others. Her husband could be blustery and demanding. The princess simply returned to Big Island of Hawaii and refused to come back. She even served as Governor of the island from March 1879 to September 1880.[1] 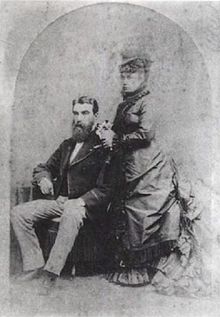 Princess Likelike and her husband

In August 1883 she wrote the strongest letter to her husband from her Big Island retreat:

"You always blame me in everything and I am getting tired of it. I will have to kill myself then you won't have me to growl at all the time. I think we are better separated...as you don't love me and I don't love you so I will simply say, 'God bless the good."

As dramatic as the letter sounds, she returned to Oʻahu. They gave birth to a daughter, Princess Kaʻiulani, 5 years after their marriage, who would be the only Kalākaua of her generation. In June 1877, two years after her daughter Kaʻiulani's birth, Likelike had a miscarriage while on a ship headed toward San Francisco, California. She would never conceive another child. From that time Kaʻiulani became the focus her life and the future of the kingdom she might one day inherit. As Kaʻiulani's mother she could be willful at times. In an early "thank you" note to her godmother, Princess Ruth Keʻelikōlani, Kaʻiulani wrote:

"Dear Mama Nui,
Thank you for the nice hat you sent me. It fits so nicely Mama wanted it, but I would not let her have it. Thank you for the corn and watermelons, they do taste so good. Are you well? With much love from your litte girl, Kaʻiulani.
PS. I want you to give Miss Barnes (her governess) a native name"

Not surprisingly another letter followed, the angry Kaʻiulani wrote:

"Dear Mama Nui,
I want another hat. Mama Likelike has taken the one you sent me. Are you better now? When are you coming coming home? With much love. From your little girl, Kaʻiulani."

Likelike was vivacious and well-liked, and her home was opened to important people from all over the world. She had a reputation of being a kindly, gracious hostess in almost every country of Europe and almost every state of the union. She would always be up with the latest fashions, ordering dresses and clothing from Paris. Princess Likelike, Liliʻuokalani, Leleiohoku and Kalākaua were known as "Hawaii's First Family of Musicians." She could be quite imperious and quick-tempered. For example she once smacked a groom with a whip for not keeping the carriage properly polished.

The cause of the princess's death is still unknown; she is said to have simply taken to her bed and refused all food. In mid January 1887, a large school of fish called 'āweoweo was seen off the coast of the island of Hawaii. The massing of the bright red fish close to shore was considered an omen of death for members an aliʻi family. On February 2, 1887, Princess Likelike died at age 36, before her daughter reached her teenage years. Some people have asserted that she did this to appease the anger of Pele, goddess of volcanoes. It was said in her last hours she predicted that Kaʻiulani would never marry and never become Queen. This prophecy later became true. There were rumors that she was prayed to death by a powerful ʻanāʻanā.[citation needed]

Main article: List of compositions and works of Likelike