Istanbul University (Turkish: İstanbul Üniversitesi) is a Turkish university located in Istanbul. The main campus is adjacent to Beyazıt Square.

A madrasa, a religious school, was established sometime in the 15th century after the Ottoman conquest of Constantinople.[1] An institution of higher education named the Darülfünun-i Osmani ('House of Sciences') was created in 1863, but suppressed in 1871.[1] In 1874 the Imperial University (Darülfünun-i Sultani) started to give lectures in law in French, but was closed in 1881.[1]

The Imperial University, now known as Darülfünun-i Shahane was refounded in 1900, with the departments of theology, arts, mathematics, science and philology.[1] In 1924, the faculties of law, medicine, arts and sciences were established in Istanbul University (Istanbul Darülfünunu), as the university was now called.[1] Islamic theology was added in 1925, but in 1933 the university was reorganized without the latter.[1]

The first modern Applied Physics courses were given at the Darülfünûn on 31 December 1863, which marked the beginning of a new period, and on 20 February 1870, the school was renamed as the Darülfünûn-u Osmanî ('Ottoman House of Multiple Sciences') and reorganized to meet the needs of modern sciences and technologies. Starting from 1874, some classes of Literature, Law and Applied Sciences were given at the building of Galatasaray High School, which continued regularly until 1881. On 1 September 1900, the school was renamed and reorganized as the Darülfünûn-u Şahane ('Imperial House of Multiple Sciences') with courses on Mathematics, Literature and Theology. On 20 April 1912, the school was renamed as the İstanbul Darülfünûnu ('Istanbul House of Multiple Sciences') while the number of courses were increased and the curricula were modernized with the establishment of the Schools of Medicine, Law, Applied Sciences (Physics, Chemistry, Mathematics), Literature and Theology.

The university has seventeen faculties on five campuses, the main campus being on Beyazıt Square in Istanbul, which was known as the Forum Tauri in the Roman period. It has a teaching staff of 2,000 professors and associates and 4,000 assistants and younger staff. More than 60,000 undergraduate and 8,000 postgraduate students follow the courses offered by Istanbul University every year. The main campus with its landmark gate used to be the Ottoman ministry of war. Located on the grounds is the Beyazıt Tower, a 85 m (279 ft) tall fire-watch tower. The grounds before that was the location of the Eski Palace (Old Palace). Some Roman and Byzantine ruins are still visible on the grounds. 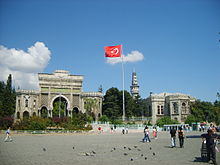 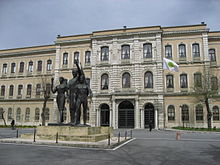 Main building with statue of Atatürk 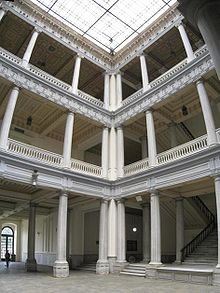 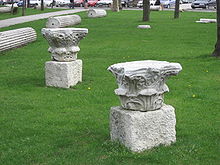 In 2010, the Academic Ranking of World Universities ranked Istanbul University as the 401-500th best university worldwide, the only Turkish institution on the list.[3]

In 2010, University Ranking by Academic Performance (URAP) ranked Istanbul University 415th in the world and second university in Turkey.[4]