Middle East Technical University (METU; in Turkish, Orta Doğu Teknik Üniversitesi, commonly referred to as ODTÜ) is a public technical university located in Ankara, Turkey. The university puts special emphasis on research and education in engineering and natural sciences, offering about 40 undergraduate programs within 5 faculties, and 97 masters and 62 doctorate programs within 5 graduate schools.[2] The main campus of METU spans an area of 11,100 acres (4,500 ha), comprising, in addition to academic and auxiliary facilities, a forest area of 7,500 acres (3,000 ha), and the natural lake Eymir. METU has more than 95,000 alumni worldwide.[3] The official language of instruction at METU is English.[2]

Over one third of the 1,000 highest scoring students in the national university entrance examination choose to enroll in METU; and most of its departments accept the top 1% of the nearly 1.5 million applicants.[2] METU had the greatest share in national research funding by the Scientific and Technological Research Council of Turkey (TÜBİTAK) in the last five years, and it is the leading university in Turkey in terms of the number of European Union Framework Programme (FP) projects participation.[4][5] Over 40% of METU's undergraduate alumni choose to pursue graduate studies.[2] 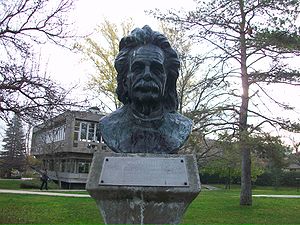 Bust of Albert Einstein, one in a series of influential scientists' busts on the METU main campus.

Middle East Technical University was founded under the name "Orta Doğu Teknoloji Enstitüsü" (Middle East Institute of Technology) on November 15, 1956, to contribute to the development of Turkey and the surrounding countries of the Middle East, Balkans, and Caucasus, by creating a skilled workforce in the natural and social sciences. "Arrangements and Procedures as for the Foundation of METU, Law No 6213" was enacted on January 22, 1957, whereby the current name "Orta Doğu Teknik Üniversitesi" (ODTÜ) was adopted. Finally, the "Foundation Act No 7907", setting forth the particular standing of METU and establishing it as a juridical entity, was enacted on May 27, 1959.[3][6]

In the early years immediately following its foundation, METU was temporarily hosted in a small building that previously belonged to the Social Security Office of Retirees in Kızılay and another building near the Grand National Assembly of Turkey. In 1963, the university moved to its current location west of Ankara city center, creating the first university campus of Turkey. In 1956, the Department of Architecture initiated the first academic program at METU, followed by the Department of Mechanical Engineering in the spring of 1957. At the start of the 1957–1958 academic year, the Faculty of Architecture, the Faculty of Engineering, and the Faculty of Administrative Sciences were established. In 1959, the establishment of the Faculty of Arts and Sciences was completed. The Faculty of Education launched its academic program in 1982.[3]

METU has 42 academic departments, most of which are organized into 5 faculties.[7] These are responsible for the undergraduate programs. 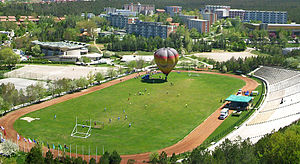 Part of METU campus. METU Stadium, a portion of dormitories in the background.

The 5 graduate schools present in METU are responsible for the graduate programs.[7] 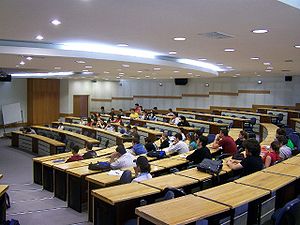 An auditorium in METU.

As of 2010, METU has approximately 23,000 students, of which 15,800 are enrolled in undergraduate programs, 4,500 in masters, and 2,700 in doctorate programs.[2] A further 1,500 students are attending programs in the new Northern Cyprus Campus.[8] Over 40% of METU's students go on to graduate school. Each academic year, METU hosts over 1,500 regular international students from nearly 80 different countries; and through 168 Erasmus Programme agreements and 182 bilateral exchange and cooperation agreements with universities abroad (e.g. in Central Asia, Middle East, North America, Australia, Far East and Pacific Region), it sends 350 students and receives 300 students and 50 researchers annually.[2] As of 2010, the university employs 2,500 faculty (professors and associate professors), 500 academic instructors, and over 2,000 research assistants.[citation needed] The number of the alumni exceeds 500,000 (about 350,000 having completed undergraduate programs).[citation needed]

METU has about 40 undergraduate programs within the faculties of Engineering, Architecture, Arts and Sciences, Economic and Administrative Sciences, and Education, and there are 97 masters and 62 doctorate programs available in the graduate schools of Natural and Applied Sciences, Social Sciences, Informatics, Applied Mathematics, and Marine Sciences.[2] METU commonly ranks close to the top among research universities in Turkey,[9] with over one third of the 1,000 highest scoring students in the national university entrance examination choosing to enroll; and most of its departments accepting the top 1% of the nearly 1.5 million applicants.[2] In the Webometrics Ranking of World Universities published in July 2009, aiming to measure through web-based publications the institution size, research output, and impact,[10] METU ranked as the world’s 435th (1st place within Turkey) among 15,000 universities, being the only university from Turkey to get included among the top 500.[4][11][12] Recently, the Times Higher Education World University Rankings published in September 2010 placed METU at the 183rd position worldwide based on indicators of teaching, research, influence, innovation, and international character,[13][14] making it one of the two universities from Turkey listed among the top 200 (The other being Bilkent University at number 112).[13] The QS World University Rankings 2010 by Quacquarelli Symonds ranked METU as 185th worldwide in the field of engineering and technology,[15] and as 285th in the field of natural sciences.[16]

The language of instruction at METU is English.[2] All enrolled students are required to have a degree of proficiency in English for academic purposes, and this is assured by a proficiency examination before the commence of studies. Students with unsatisfactory knowledge of English follow a preparatory English education for one year, given by the METU School of Foreign Languages. Two exceptions instructed in Turkish are the Turkish language and the history of Turkish revolution courses mandated by the Council of Higher Education. 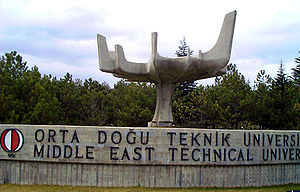 Statue of "Tree of Science" (Turkish: Bilim Ağacı) by the main entrance to METU campus.

As of 2010, METU has 19 international joint degree programmes with European and American universities at the undergraduate and graduate levels.[2] METU is a member of various associations and networks dealing with international education and exchange, including EUA, EAIE, IIE, GE3, CESAER, SEFI, and CIEE.[2] The university also actively participates in AIESEC and IAESTE summer internship programs. English as the language of instruction in all its degree programs has greatly facilitated METU's international involvements and accommodation of international students and researchers.

METU continually goes through external assessment, accreditation, and certification by international organizations. In 1991, METU initiated a long term program to have its engineering programs evaluated by the Accreditation Board for Engineering and Technology (ABET), the recognized U.S. accreditor of college and university programs in applied science, computing, engineering, and technology. This process was concluded with the Faculty of Engineering having all its thirteen undergraduate programs declared as "substantially equivalent" to the ABET accredited programs in the USA.[23] The university has completed the evaluation process of Institutional Evaluation Programme (IEP) of the European University Association (EUA) in 2002.[24]

Because of METU's effort to maintain international standards, the Faculty of Engineering was awarded in 1977 the "Silver Badge of Honor" by the UNESCO International Center for Engineering Education and the "Meritorious Achievement Award in Accreditation Activities" by the Institute of Electrical and Electronic Engineers (IEEE). METU was awarded the international Aga Khan Award for Architecture in 1995 for its forestation program.

Being the pioneer institution of the country to connect to the Internet backbone in the early 1990s, METU also manages Turkey's Country Code Top-level Domain (ccTLD) (the ".tr" domain).[25]

The METU main library has one of the largest collections in Turkey,[26] containing nearly 400,000 books[27] classified according to the Library of Congress Classification (LCC) scheme.[28] The library subscribes to 1,500 print journals (170,270 volumes) and it provides access to 50,537 electronic journals, 71,256 electronic books, and 66 electronic reference sources.[29] The library collections also hold over 1,780 book and serial CDs, 1,300 doctoral dissertations and 11,600 masters theses. Abstracts for doctoral dissertations and some master theses from North American colleges and universities and some accredited international universities are also provided, starting from 1861, with full texts available from the year 1997.[30] All of library's collections are predominantly in English, but there are also items in Turkish, German, and French. 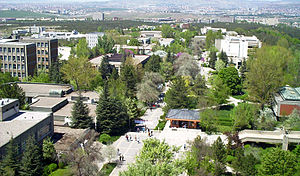 METU main campus in Ankara, used by the university since 1963, is the first university campus of Turkey. It is situated about 20 km west of central Ankara and encompasses an area of 11,100 acres (4,500 ha), of which 7,500 acres (3,000 ha) constitute the METU Forest.[2] The campus grounds was transformed into a forest with the continuing help of students and volunteers since the foundation of the university.[31] The creation of this distinctive campus with its forest was spearheaded by the METU rector from 1961 to 1969, Kemal Kurdas.

Lake Eymir near Gölbaşı, inside the campus, is used by the students and faculty for rowing and recreational activities. The campus is accessible by several types of public transport, and the construction of METU subway station of the Ankara Metro on the main entrance to the campus (gate A1) is near completion.

METU Erdemli campus in Mersin on the Mediterranean coast, used by the Institute/Graduate School of Marine Sciences (Deniz Bilimleri Enstitüsü) since 1975, is the first campus of METU out of Ankara. It is situated about 45 km from Mersin. Campus area is 660,000 m², close to the shore and surrounded by lemon trees. The laboratory space is about 700 m². METU-IMS Harbor is an important shelter for marine biological diversity on the Mersin coast. The harbor is the only intact rocky habitat along the long sandy coast.

The new METU Northern Cyprus Campus, about 50 km west of Lefkoşa (Nicosia) on the island of Cyprus, admitted its first students during the academic year 2002 - 2003, but the doors were officially opened in Cyprus in September 2005.[32]

Live footage from all campuses can be accessed via METU-CAM, a collection of six webcams in METU main campus, one in METU Northern Cyprus Campus, and one in the Graduate School of Marine Sciences, in Erdemli, Mersin.

METU-Technopolis, or METUTECH, is the first science and research park of Turkey.[33] Founded within the campus, it aims to facilitate the development of companies that conduct substantial research and development to produce high-tech products and services through benefiting from METU's research capacity and information pool. Priority is given to companies executing research and development work on information technologies, advanced materials, energy, automotive, chemistry, biology and environment technologies.

As of 2009, the METU-Technopolis project employs about 3,300 personnel, approximately 2,700 of which are researchers (86% of the total staff are university graduates, and 23% have MS, MA, or PhD degrees), working within 240 firms.[34] Around 90% of the firms are small and medium enterprises (SMEs), 65% of these are specialized in information and communication technologies, 25% in electronics, and 15% in other sectors such as aerospace, environment, bio-technology, nanotechnology, and advanced materials.[34] The company profile also includes multinationals such as SBS[disambiguation needed

], Cisco, and Siemens. To promote entrepreneurship and innovation, the incubation center at the METU-Technopolis serves 38 start-ups and micro sized companies, most of which start their life a spin-offs from METU research projects. 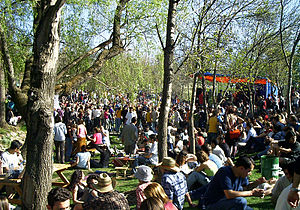 The student life at METU is marked with activities of student societies, frequent political protests, and festivals. The Cultural and Convention Center continually hosts a wide spectrum of cultural events and also regular occurrences such as the METU Jazz Days and METU Art Festival. The event with the largest number of participants is the annual METU Spring Festival, a five day long series of open air concerts and exhibitions held at the main campus.

There are various traits shared by METU students, including the usage of an English–Turkish jargon (apparently stemming from the fact that English is the language of instruction) covering academic processes and student life, which reputedly is not liked much by the students of other universities; and the omnipresent word "hocam" (meaning "my teacher"), which is used by METU students to address anyone from bus drivers to senior faculty members. Underneath this phrase lies the philosophy that everyone has something to learn from each other.

There are numerous student societies active in METU.[38] Some of these are: